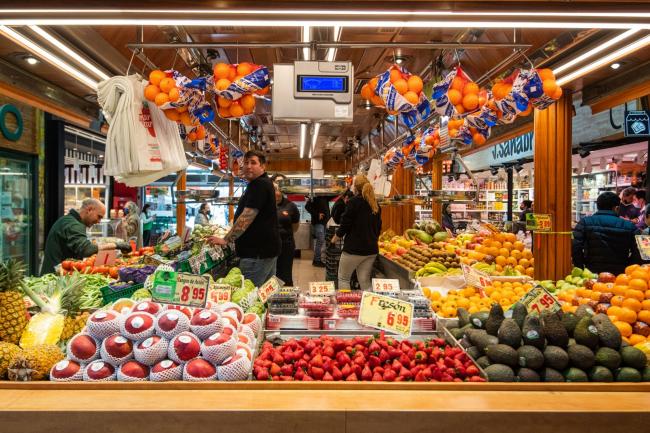 IMF Deputy Okamura Warns Inflation May Be Faster Than Feared

© Bloomberg. Fresh produce on display at a market in Madrid, Spain, on Wednesday, April 20, 2022. Spain’s central bank doubled its inflation forecasts for this year and next, while trimming its outlook for economic expansion, as Russia’s invasion of Ukraine fans already-soaring energy costs.

(Bloomberg) — Inflation may turn out to be even faster than global central bankers currently anticipate, according to International Monetary Fund Deputy Managing Director Kenji Okamura.

Federal Reserve Chair Jerome Powell is widely expected to deliver a half-percentage point interest-rate increase this week to tackle the fastest inflation in decades. Okamura’s comments suggest other major central banks may still be underestimating the risk that costs keep rising beyond their comfort zones.

“They must keep their finger on the pulse of the economy and adjust policy as needed,” said Okamura. “As they tighten, major central banks should communicate clearly, mindful of spillover risks to vulnerable emerging, and developing economies.”

The deputy managing director, who took on his role in December after decades of serving in Japan’s finance ministry, covered a range of issues in the written interview. Here are excerpts:

Q: What are the biggest risks facing the world economy?

“We continue to stress that the most important priority for the global economy is to end the war in Ukraine. The war has a direct impact on many of the other challenges we face, such as high debt levels, food security, and inflation.”

Q: How are you viewing the war in Ukraine and its possibility to further damage the global economy?

“Aside from the human toll, the conflict is resulting in dramatic and far‑reaching economic consequences, with spillovers to the region and the world. The war will slow economic growth and increase inflation.

Q: How concerned are you about a global move toward de-globalization and the repatriation of production centers?

“We should recognize that globalization has brought significant economic benefits, particularly to the developing world but also by lowering costs and increasing efficiency for all countries. But there is clearly a backlash underway, with a rise in protectionism and now rising concerns brought on by disruptions to supply chains due to war and the pandemic.”

“We are concerned about countries dividing into blocs, which would be detrimental to global prosperity.”

Q: Are governments spending appropriately to aid the recovery from the pandemic? What are the areas that need more support?

“The international community should recognize that its pandemic financing addresses a systemic risk to the global economy, not just the development need of a particular country. Accordingly, it should allocate additional funding to fight pandemics and strengthen health systems both domestically and overseas. This will require about $15 billion in grants this year and $10 billion annually after that.”