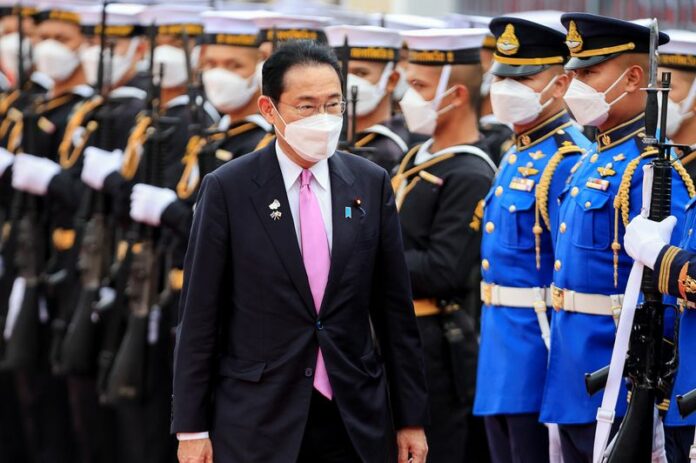 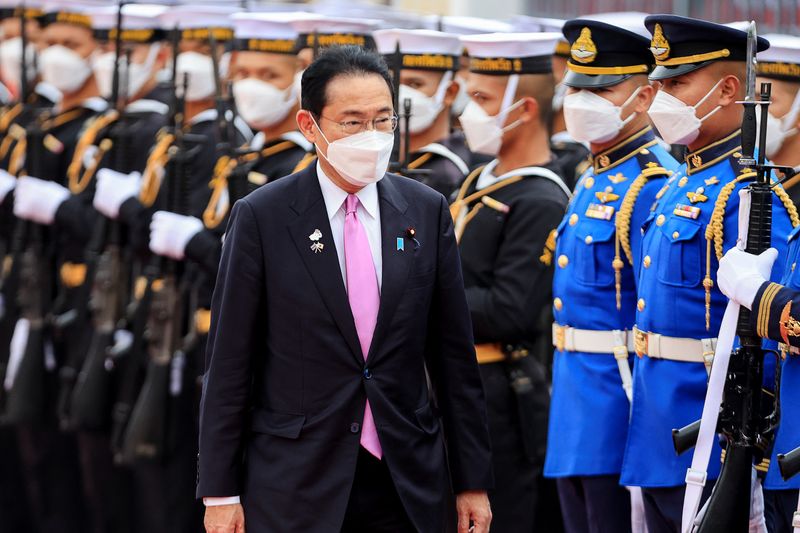 © Reuters. Japan’s Prime Minister Fumio Kishida reviews an honour guard as he meets with his Thai counterpart Prayuth Chan-ocha during his official visit to Thailand, in Bangkok, Thailand May 2, 2022. REUTERS/Soe Zeya Tun

BANGKOK (Reuters) -The leaders of Japan and Thailand announced a new defence agreement on Monday as well as plans to upgrade their economic relations, as Japanese Prime Minister Fumio Kishida wrapped up the last leg of a three-nation tour of Southeast Asia.

The agreement would facilitate the transfer of defence hardware and technology from Japan to Thailand, which has one of the region’s biggest and most equipped armies and a long history of ties with the United States military. Further details of the deal were not disclosed.

“This will help improve national defence and support investment from Japan in this activity which is an important goal for Thailand,” Thai Prime Minister Prayuth Chan-ocha said in a joint statement read alongside Kishida.

Prayuth said he discussed improvements in supply chains and the drafting of a five-year economic partnership with Japan, Thailand’s biggest investor.

Southeast Asia has for decades been an important region for Japan, hosting some of its biggest names in industry, from infrastructure, engineering and industrial zones to the manufacturing of vehicles and electronics.

As the leader of Asia’s sole member of the Group of Seven (G7), Kishida discussed Russia’s invasion of Ukraine during his trip to Southeast Asia, where only one nation – Singapore – has joined sanctions against Moscow. Russia calls its actions in Ukraine a “special operation”.

“I agreed with Prime Minister Prayuth that in any region the violation of sovereignty and territorial integrity, or unilateral changes to the status quo with force, should not be tolerated,” he said.