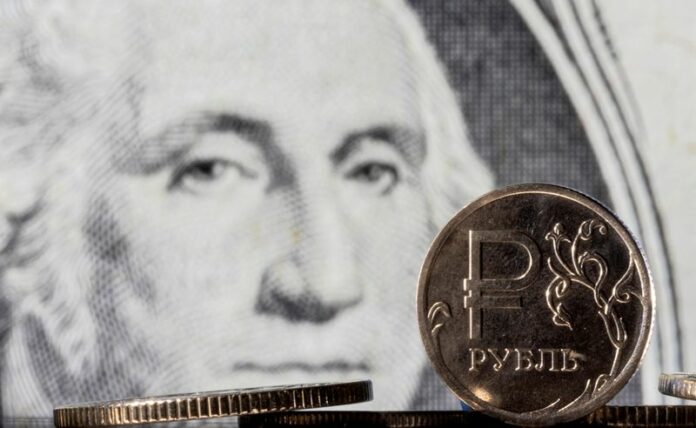 Russia swerves to avoid default: what is next?

By Rodrigo Campos and Davide Barbuscia

NEW YORK (Reuters) – Russia may have averted default as it announced it had made several overdue payments in dollars on its overseas bonds, shifting the market’s focus to upcoming payments and whether it would stave off a historic default.

Russia’s $40 billion in international bonds and the chance of a default have become the focus of global financial markets since it was hit with sanctions from the United States and its allies after its invasion of Ukraine in late February.

Dubbed a “special military operation” by Russia, the invasion has turned Russia into a pariah, including in financial markets, and has entangled its ability to pay its debts.

The chance of default dramatically increased in early April when the United States stopped the Russian government from using frozen reserves to pay some $650 million to its bondholders.

With the end of a grace period on those payments looming, Russia’s finance ministry said on Friday it had paid, in dollars, $564.8 million of coupon and redemption obligations on a bond maturing in 2022 and a coupon payment of $84.4 million on another due in 2042.

The announcement surprised markets that had been gearing up for a default at the end of the grace period on Wednesday, which would have been Russia’s largest major external default in over a century.

WHAT HAPPENED ON APRIL 29?

The Russian finance ministry announced it paid nearly $650 million it owed holders of two of its dollar bonds. Two creditors told Reuters they had not yet seen the money in their accounts, but a senior U.S. government official confirmed that the payments had been made and that the source appeared to be outside the limits of the current sanctions.

The Credit Derivatives Determinations Committee, representing major global banks and asset managers, met on Friday and acknowledged the reports of Russia’s payments, but nonetheless made plans for a credit default swap auction next week “solely in order to prepare for the possibility of a Failure to Pay Credit Event.”

WHAT WAS THE MARKET REACTION?

Russian bond prices jumped higher according to traders, in some cases by 15 cents, nearly doubling in price. Bonds of major still-unsanctioned companies such as Gazprom (MCX:GAZP), Lukoil and telecoms firm VimpelCom (NASDAQ:VEON) were quoted up 2-5 cents too.

Insurance against Russia’s default got less expensive, with five-year credit default swaps (CDS) linked to Russia’s sovereign debt down to 64.333% upfront from 76.4% upfront on Thursday, according to S&P Global (NYSE:SPGI) Market Intelligence.

If Friday’s announced payments clear, attention will shift to two events at the end of May:

1) Transactions between U.S. persons and Russia’s finance ministry, central bank or national wealth fund are only allowed under a temporary license issued by the U.S. Office of Foreign Assets Control (OFAC) that will expire on May 25. The U.S. Treasury has not commented on whether that deadline will be extended.

The payment on the euro bond could be done in rouble as a last resort, but the dollar bond does not have that provision.

The bonds related to the April 4 payment did not include rouble payments as an option, which was key in determining that a “potential failure to pay” had occurred when Russia tried to pay in rouble.

HOW MUCH DOES RUSSIA OWE, AND DOES MOSCOW HAVE THE CASH?

If last week’s payments clear, Russia’s international bond payment obligations through the end of the year are about $2 billion.

Prior to the Ukraine crisis roughly $20 billion, or half the outstanding foreign currency issuance, was held by investment funds and money managers outside Russia.

The threat of Russian default is peculiar in that Moscow is expected to have the funds to pay its obligations. The fact that some of its sources are frozen or under sanctions boils it down to Moscow’s willingness to pay from other cash sources, rather than its ability to do so.

Only half of Russia’s over $600 billion of foreign reserves was frozen as a result of the sanctions.

Even as Europe has pledged to diversify its energy purchases, Russia has gotten this year, on average, close to $1 billion a day in revenue from sales of oil, coal and gas.