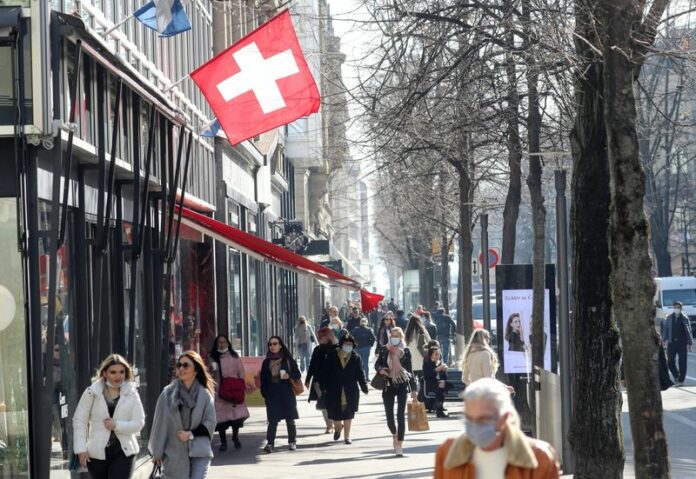 © Reuters. FILE PHOTO: Shoppers walk along the street after the Swiss government relaxed some of its COVID-19 restrictions, as the spread of the coronavirus disease continues, at the Bahnhofstrasse shopping street in Zurich, Switzerland March 1, 2021. REUTERS/Arnd W

The PMI index – which points to the health of the industrial sector over the next three to six months – fell to 62.5 points in April from 64.0 points in March.

Still, the figure remained above the 50 level which indicates expansion.

“Supply chain problems are gradually easing. However, prices are rising and there are no signs of this trend softening significantly for the time being,” said Credit Suisse (SIX:CSGN), which compiles the PMI survey with Swiss purchasing managers’ association procure.ch.

“The high backlog of orders and solid labour market are encouraging signs for the trend going forward,” Credit Suisse said. The recovery in Swiss manufacturing is continuing, but there are growing signs momentum is slowing, it said.

The PMI survey showed that delivery problems had eased a little, but purchase prices were rising on a broad scale, with 89% of the businesses participating in the survey reporting higher procurement prices.

The consumer sentiment index plunged to −27.4 points in April, from -3.8 points in January, its biggest decline since the onset of the pandemic in the spring of 2020, SECO said in a statement.

“Households are feeling the strain as prices continue to rise,” SECO said.