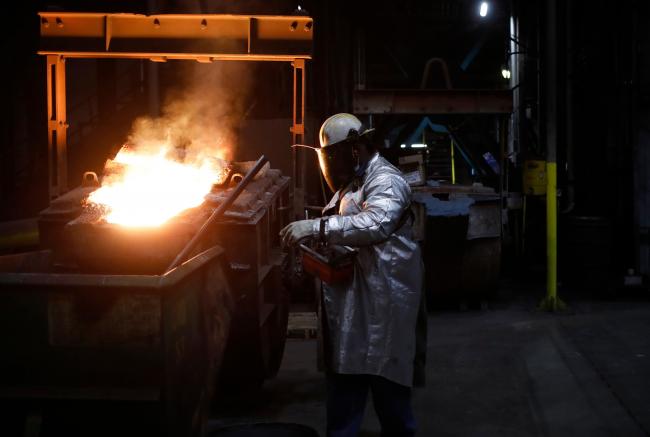 © Bloomberg. A worker manipulates a cask of molten iron during cookware production at a factory in South Pittsburg, Tennessee.

(Bloomberg) — A measure of U.S. manufacturing activity unexpectedly dropped in April to the lowest level since 2020 as growth in orders, production and employment softened.

The Institute for Supply Management’s gauge of factory activity fell to 55.4 last month from 57.1, according to data released Monday. Readings above 50 indicate expansion. The figure was weaker than all but one estimate in a Bloomberg survey of economists, which had a median projection of 57.6.

The latest data point to signs of softening demand for merchandise. Measures of both new orders and production dropped to their lowest levels since May 2020, though remained above the threshold that indicates growth.

The supplier deliveries gauge was one of the only measures in the report to rise during the month, showing longer lead times as factories remain haunted by transportation bottlenecks and delays.

The deliveries index climbed to a five-month high as producers contend with restrictive Covid-19 measures in China and Russia’s war in Ukraine that are delaying shipments.

“The U.S. manufacturing sector remains in a demand-driven, supply chain-constrained environment,” Timothy Fiore, chair of ISM’s Manufacturing Business Survey Committee, said in a statement. “In April, progress slowed in solving labor shortage problems at all tiers of the supply chain.”

A measure of prices paid by manufacturers settled back somewhat but remains extremely elevated.

Meantime, the employment gauge fell to a seven-month-low of 50.9, suggesting a slower pace of hiring in April. The government’s monthly jobs report, out Friday, is projected to show manufacturers added more than 30,000 jobs last month.

ISM’s data also pointed to a slight improvement in the mismatch between supply and demand. Backlog growth decelerated, and a gauge of customer inventories rose to its highest since December 2020, though remains historically low.