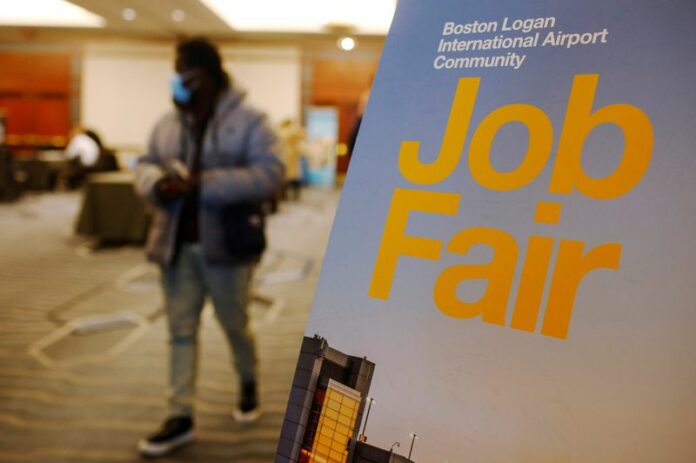 “For the economy, this points to another strong jobs report on Friday, and for workers, this means continued strong wage increases, especially for those who change jobs,” said Robert Frick, corporate economist at Navy Federal Credit Union in Vienna, Virginia. “The situation likely will continue well into this year given the Federal Reserve’s efforts to cool the labor market probably won’t gain traction for months.”

Job openings, a measure of labor demand, rose by 205,000 to 11.5 million on the last day of March. The second straight monthly increase lifted job openings to the highest level since the series started in 2000. The retail sector led the rise, with an additional 155,000 unfilled jobs. Manufacturers of long-lasting goods reported 50,000 more vacancies.

Job openings increased in the South but fell in the Northeast, Midwest and West. Economists polled by Reuters had forecast 11 million vacancies.

The job-workers gap, which Goldman Sachs (NYSE:GS) argues is a better measure of labor market tightness, widened to 5.6 million from 5.08 million, accounting for an all-time high of 3.4% of the labor force, up 0.3 percentage points from February.

According to Goldman Sachs, narrowing the gap halfway by 2.5 million would be enough to slow the fast pace of wage growth.

The JOLTS data is being closely watched by the Federal Reserve, which has adopted an aggressive monetary policy stance as it battles skyrocketing inflation, with annual consumer prices surging at rates last seen 40 years ago.

The U.S. central bank is expected to hike interest rates by half of a percentage point on Wednesday, and likely to start trimming its asset holdings soon. The Fed raised its policy interest rate by 25 basis points in March.

Stocks on Wall Street were trading higher. The dollar fell against a basket of currencies. U.S. Treasury prices were mostly higher.

“Traditionally, the Fed has concentrated on unemployment as a measure of the number of workers who can’t find jobs,” said Lou Crandall, chief economist with Wrightson ICAP (LON:NXGN) in Jersey City, New Jersey. “In today’s environment, the Fed is more focused on the number of firms who can’t find workers. The Fed’s near-term policy goal is to slow aggregate spending enough to reduce the excess demand for labor.”

Hiring fell by 95,000 jobs to 6.7 million in March. Modest increases in manufacturing, professional and business services, and leisure and hospitality were offset by declines in financial activities, education and health services, government, and trade, transportation and utilities.

There are now 70% more jobs available than new hiring. There were a record 1.92 jobs per unemployed person in March.

“The persistent difficulty that employers have in filling positions will push wages higher and spur employers to automate operations or find other efficiencies to make do with smaller staffs,” said Sophia Koropeckyj, a senior economist at Moody’s (NYSE:MCO) Analytics in West Chester, Pennsylvania.

“These challenges will only grow as more baby boomers leave the labor force. Companies will open operations in parts of the country with more available workers or at least will rely more on remote workers who reside in areas with better demographics.”

With jobs abundant, workers are quitting in droves. Quits increased by 152,000, lifting the total to a record 4.5 million. They were concentrated in the professional and business services industry, where resignations increased by 88,000. In the construction sector, quits rose by 69,000. The number of quits increased in the South and West.

The quits rate climbed back to the all-time high of 3.0% scaled in late 2021 from 2.9% in February. The quits rate is viewed by policymakers and economists as a measure of job market confidence. The higher quits rate suggests wage inflation will likely continue to build up as companies scramble for workers.

Layoffs increased in March but remained at low levels. The layoffs rate held at 0.9% for a third straight month.