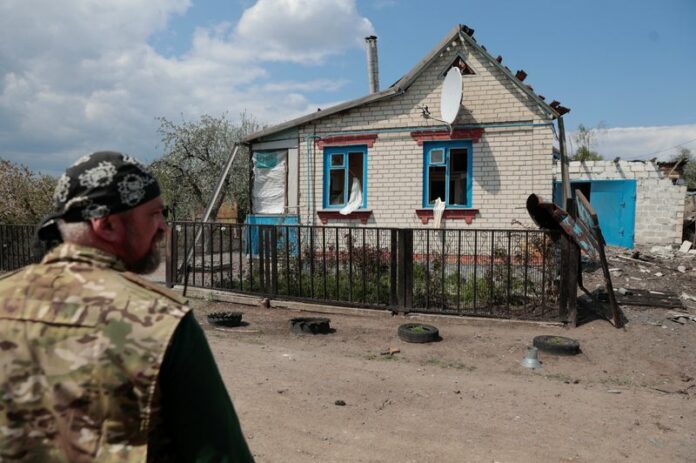 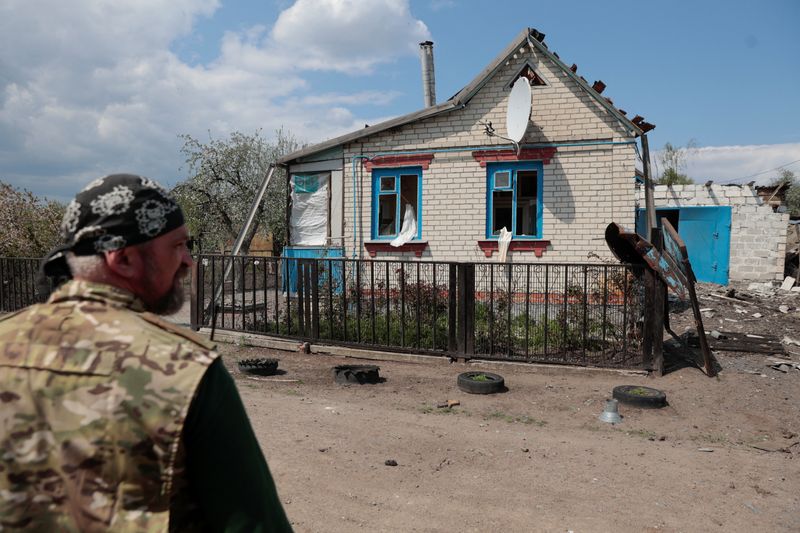 © Reuters. Andrii, a serviceman of the Ukrainian Armed Forces volunteer unit Karpatska Sich, stands in a front of a residential house, damaged during a Russian military strike, as Russia’s attack on Ukraine continues, in Kharkiv region, Ukraine May 2, 2022. REUTERS

By Joseph Campbell and Tom Balmforth

ZAPORIZHZHIA, Ukraine (Reuters) -Russian forces fired rockets at an encircled steel works in Ukraine’s southern port city of Mariupol and thick smoke blackened the sky at the plant where officials on Tuesday said 200 civilians were trapped despite evacuations.

Russia’s offensive to capture the east and south after failing to take the capital of Kyiv has been met with commitments by Western powers to supply heavier weapons to Ukraine. On Tuesday, the European Commission is expected to finalise a ban on buying Russian oil in an effort to squeeze Moscow’s war chest.

The U.S. Congress is considering a $33 billion military aid package, and the United Kingdom this week vowed an additional $375 million in defence assistance.

Reuters images showed volleys of rockets fired from a Russian truck-mounted launcher towards the sprawling Soviet-era steel complex from the outskirts of Russian-occupied Mariupol on Monday.

The attack followed a UN-brokered ceasefire around the complex that allowed several groups of civilians to escape Mariupol’s last holdout of Ukrainian fighters in recent days. It was not immediately clear if new fighting was preventing more evacuations.

Mariupol mayor Vadym Boychenko said he hoped a first column of evacuees would reach the Ukrainian-controlled city of Zaporizhzhia on Tuesday, adding that more civilians were trapped in bunkers and tunnels under the complex and some 100,000 remained in the rest of the city.

“You wake up in the morning and you cry. You cry in the evening. I don’t know where to go at all,” said Mariupol resident Tatyana Bushlanova, sitting by a blackened apartment block and talking over the sound of shells exploding nearby.

Mariupol is a major target for Russia as it seeks to cut Ukraine off from the Black Sea and connect Russian-controlled territory in the south and east.

Russian bombardments since troops invaded Ukraine on Feb. 24 have flattened cities, killed thousands of civilians and forced more than five million to flee the country.

The war launched by Russian President Vladimir Putin has shifted to the eastern provinces of Donetsk and Luhansk, parts of which were already held by Russian-backed separatists.

Russia’s troops are trying to encircle a large Ukrainian force there, attacking from three directions with massive bombardment along the front. Russia calls its actions in Ukraine a “special operation” to disarm Ukraine and protect it from fascists.

Ukraine and the West say the fascist allegation is baseless and that the war is an unprovoked act of aggression.

“We ask you not to stop, to accelerate the pace of heavy weapons provision,” she told British television, adding that she had not seen President Volodymyr Zelenskiy since the start of the invasion.

Pope Francis said in an interview published on Tuesday that he had asked for a meeting in Moscow with Putin to try to stop the war but had not received a response. French President Emmanuel Macron will speak with Putin on Tuesday, Macron’s office said.

In Brussels, the European Commission is expected to finalise a proposed sixth package of EU sanctions against Russia on Tuesday, including a possible embargo on buying Russian oil. In a major shift, Germany said it was prepared to back an immediate oil embargo.

“This package should include clear steps to block Russia’s revenues from energy resources,” Zelenskiy said in his nightly video address.

EU countries have paid more than 47 billion euros ($47.43 billion) to Russia for gas and oil since it invaded Ukraine, according to research organisation the Centre for Research on Energy and Clean Air.

Ambassadors from EU countries will discuss the proposed sanctions when they meet on Wednesday. Putin responded with retaliatory economic sanctions against “unfriendly” foreign states on Tuesday.

The pope told the newspaper that Hungarian Prime Minister Viktor Orban had told him Russia planned to end the war on May 9, which Russia celebrates as “Victory Day”, marking Nazi Germany’s surrender in 1945.

Russian Foreign Minister Sergei Lavrov said earlier this week that Moscow would not rush to meet that symbolic date.

Ukraine’s second biggest city, Kharkiv, was under bombardment, as it has been since the early days of the invasion, the Ukrainian military said on Tuesday.

Giving an update on the battle front, Ukraine’s general staff said its forces were defending the approach to Kharkiv from Izyum, a town on the Donets river, some 120 km (75 miles) to the southeast, as the enemy left a trail of destruction in Luhansk province.

Some other areas of Donetsk were under constant fire and regional authorities were trying to evacuate civilians from frontline areas, the Ukrainian president’s office said.

Russian shelling killed at least three civilians in the town of Vuhledar, the president’s office said. Ukraine’s military said Russian forces were trying to take the frontline town of Rubizhne.

Heavy clashes were taking place around Popasna, in Luhansk. Shelling was so intense it was not possible to collect bodies, said regional Governor Serhiy Gaidai.

​”I don’t even want to speak about what’s happening with the people living in Popasna, Rubizhne and Novotoshkivske right now. These cities simply don’t exist anymore. They have completely destroyed them.”