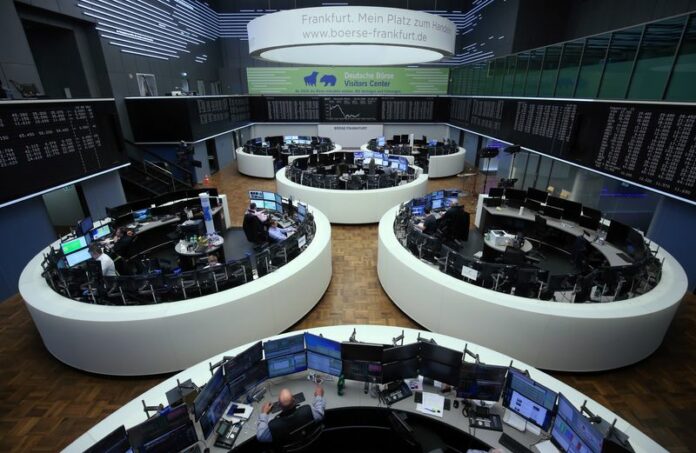 Stocks up, U.S. yields at 3% as markets ready for Fed hike 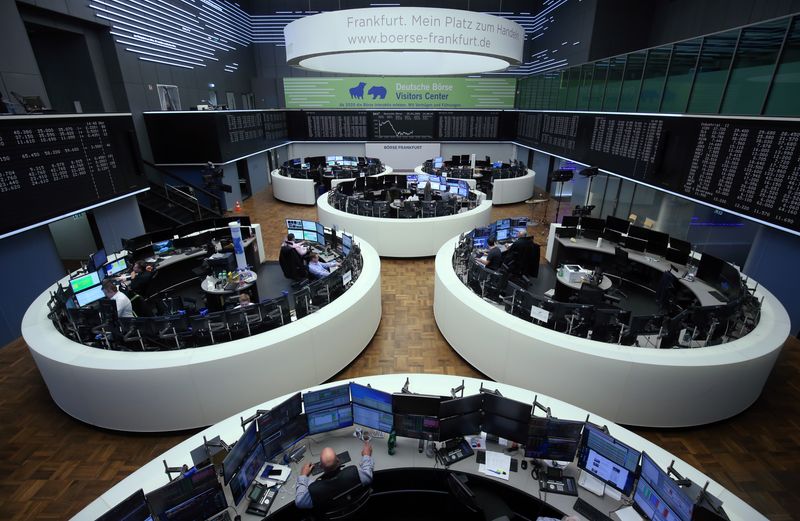 © Reuters. A general view shows the German share price index DAX board during afternoon trading as markets react on the coronavirus disease (COVID-19) at the stock exchange in Frankfurt, Germany, March 25, 2020. REUTERS/Ralph Orlowski/Files

In a busy week for central bank meetings, Australia’s central bank raised its key rate by a bigger-than-expected 25 basis points on Tuesday, lifting the Aussie dollar as much as 1.3% and hitting local shares.

On Thursday, the Bank of England is expected to raise rates for the fourth time in a row.

MSCI’s benchmark for global stocks gained 0.1% by 0813 GMT as European shares rose after surviving a “flash crash” on Monday caused by a single sell order trade by Citigroup (NYSE:C).

The pan-European STOXX 600 equity benchmark was up 0.8%, bouncing back from Monday’s losses with a tech-led rally on Wall Street and supported by upbeat earnings reports and gains in banking stocks tracking higher bond yields.

“These are small flashes of sunshine in the markets. The broader scenario however is not encouraging,” said Enrico Vaccari, head of institutional sales at Consultinvest in Milan.

“Even though there’s room for stock markets to rally from oversold levels, in the long term the headwinds are too many, simply because the speed of the Fed’s rate hikes will drive equity and especially bond market movements,” he added.

In the UK, the FTSE 100 index, which reopened following a long weekend, fell 0.2%. In France, BNP rose 4% after a sharp increase in trading activities helped the country’s biggest lender top earnings growth expectations.

In Asia, equities were mostly steady in holiday-thinned trade, with both China and Japan markets shut, but in Hong Kong, Alibaba (NYSE:BABA) shares fell as much as 9% on worries over the status of its billionaire founder Jack Ma.

A state media report that Chinese authorities had taken action against a person surnamed Ma hit the stock hard, but it recouped losses after the report was revised to make clear it was not the company’s founder.

On Monday, Wall Street closed a seesaw session higher as investors bought into tech stocks in the last hour of trading amid bets they had been overly beaten down ahead of this week’s Fed meeting.

Investors expect the Fed to raise rates by 50 basis points at the end of a two-day meeting on Wednesday, although there was uncertainty around how hawkish Chair Jerome Powell will sound in comments following the decision.

Around 250 basis points of rate hikes by the end of this year are already priced in by money markets, which some analysts say reduces the scope for hawkish surprises this week.

U.S. treasury yields stayed above 3% in European morning trade, after breaching that key psychological milestone for the first time since December 2018 on Monday.

Consultinvest’s Vaccari said if 10-year U.S. yields were to reach 4%, there would be a “very strong shift towards bonds even though that risk today looks quite far away”.

The dollar, which has been supported by safe haven buying on worries over the economic outlook, stayed just below the nearly two-decade high reached in April and the euro steadied above the lowest level in more five than years hit last month.

Elsewhere in currency markets, the Australian dollar jumped after the central bank raised its cash rate by a surprisingly large 25 basis points to 0.35%, the first hike in more than a decade. It also flagged more rate hikes to come as it pulls down the curtain on massive pandemic-related stimulus.

“The RBA has joined the club, with a rate hike today that was a little larger than we had expected. The case to start to move policy off emergency settings was clear and the RBA has responded to that,” said Jo Masters, chief economist at Barrenjoey in Sydney.

The UK pound rose, moving away from its 22-month lows against the dollar as traders took profits on the recent surge in the greenback ahead of the Bank of England policy meeting.

Oil prices slipped, pulled in opposite directions by China’s COVID-19 lockdowns, which could weigh on fuel demand, and prospects for a supply hit from a possible European oil embargo on Russia.

Gold prices hit their lowest since mid-February, as an elevated dollar and the imminent rate hike by the Fed dampened bullion’s appeal as an inflation hedge.