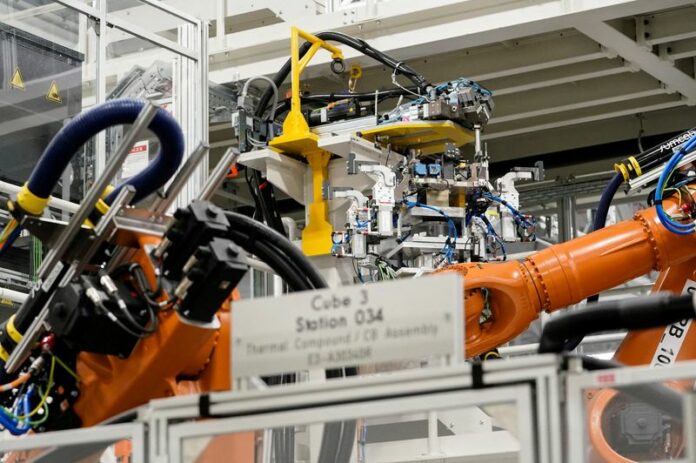 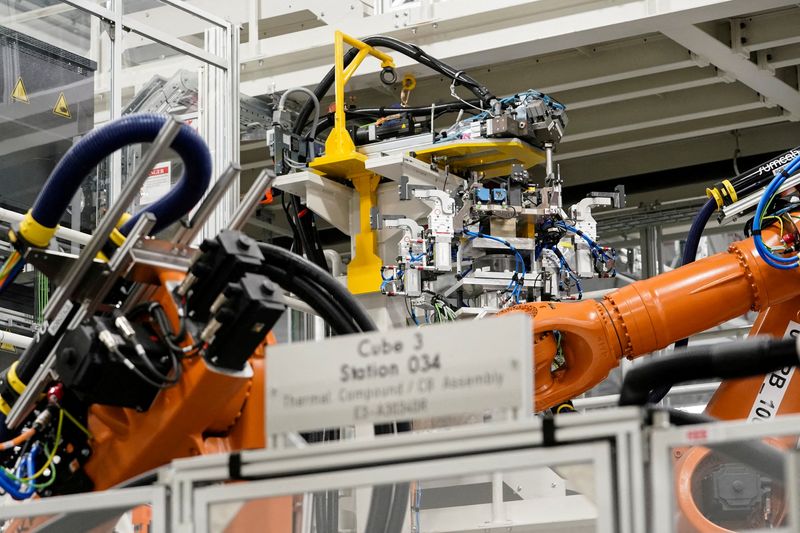 © Reuters. FILE PHOTO: Machines are seen on a battery tray assembly line during a tour at the opening of a Mercedes-Benz electric vehicle Battery Factory, marking one of only seven locations producing batteries for their fully electric Mercedes-EQ models, in Woodsto

The funds will be allocated by the Department of Energy from the $1 trillion infrastructure bill President Joe Biden signed last year. Among the initiatives will be processing of minerals for use in large-capacity batteries and recycling those batteries, the agency said in a statement.

Biden wants half of vehicles sold in the U.S. to be electric by 2030, a goal he hopes will boost unionized manufacturing jobs in key election battleground states, thwart Chinese competition in a fast-growing market, and reduce climate-changing carbon emissions.

The administration is also positioning the measures as a step to secure energy independence and cut long-term inflation pressures exacerbated by Russia’s Feb. 24 invasion of Ukraine.

“As we face this Putin price hike on oil and gas, it’s also important to note that electric vehicles will be cheaper over the long-haul for American families,” Mitch Landrieu, the White House infrastructure coordinator, told reporters in a briefing, referring to Russian President Vladimir Putin.

“This investment will strengthen our domestic battery supply chain, create jobs, and help U.S. manufacturers compete on the global stage,” Steven Croley, Ford’s general counsel, said in a statement. “We have a moment of opportunity to own this technology here in the U.S., and investments like the one announced today will help us get there.”

But the funds will not go toward developing new domestic mines to produce the lithium, nickel, cobalt and other high-demand minerals needed to make those batteries. Some of those projects face local opposition and are tied up in Biden administration environmental and legal reviews.

“These resources are about battery supply chain, which includes producing, recycling critical minerals without new extraction or mining,” said Gina McCarthy, Biden’s national climate adviser. “So that’s why we’re all pretty excited about this.”

In March, Biden invoked the Cold War-era Defense Production Act to support the production and processing of those minerals. He requested funding to support that initiative last week as part of a $33 billion package on Ukraine-related initiatives.