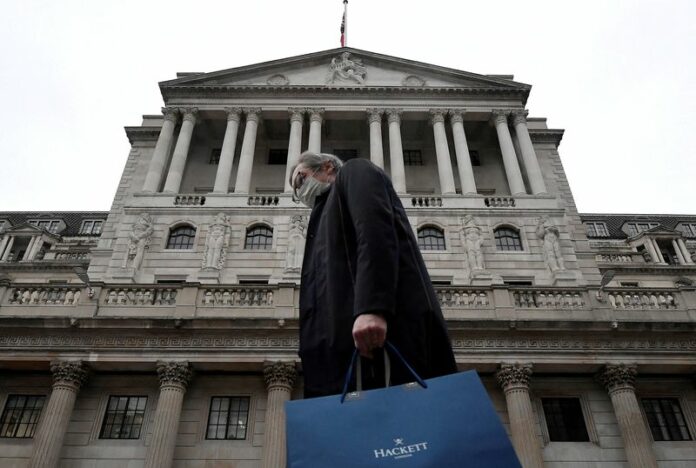 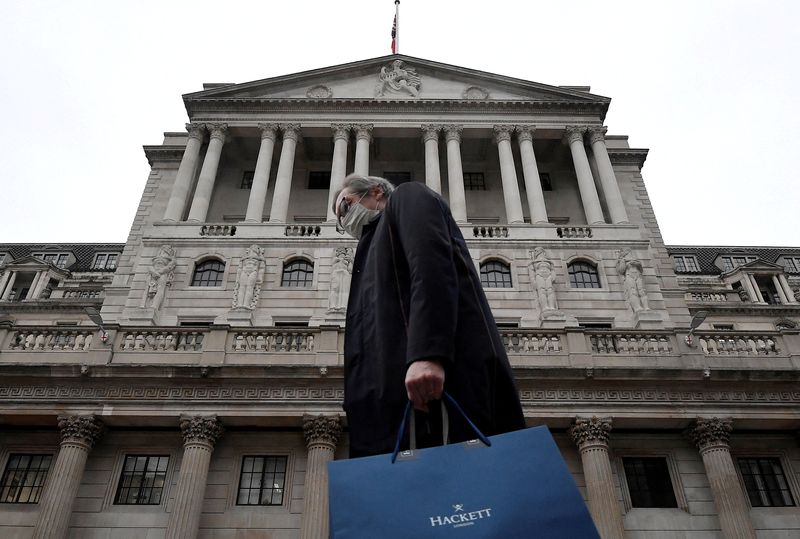 LONDON (Reuters) -The Bank of England sent a stark warning that Britain risks a double-whammy of a recession and inflation above 10% as it raised interest rates on Thursday to their highest since 2009, hiking by a quarter-point to 1%.

The pound fell by more than a cent against the U.S. dollar to hit its lowest level since mid-2020, below $1.24, as investors reacted to the darker economic forecasts.

The BoE’s nine rate-setters voted 6-3 for the rise in Bank Rate from 0.75%, with Catherine Mann, Jonathan Haskel and Michael Saunders calling for a bigger increase to 1.25%.

Economists polled by Reuters had forecast a more dovish 8-1 vote to raise the benchmark for borrowing costs to 1%, with one policymaker opposing a hike.

Central banks are scrambling to cope with a surge in inflation that they described as transitory when it began with the post-pandemic reopening of the global economy, before Russia’s invasion of Ukraine sent energy prices spiralling.

The BoE said it was also worried about the impact of renewed COVID-19 lockdowns in China which threaten to hit supply chains again and add to inflation pressures.

But policymakers around the world are also trying to avoid sending their economies into a slump.

“The point being is we are walking this very narrow path now,” Bailey told reporters.

On Wednesday, the U.S. Federal Reserve raised rates by half a percentage point to a range of 0.75-1.0%, its biggest increase since 2000. Chair Jay Powell said further 50-basis-point hikes were on the table.

The BoE’s move represented its fourth consecutive rate hike since December, the fastest pace in 25 years.

The BoE said most policymakers believed “some degree of further tightening in monetary policy may still be appropriate in the coming months”. It dropped the word “modest” to describe the scale of rate hikes ahead.

A split emerged, with two members saying the guidance was too strong given the risks to growth.

“The decision to raise interest rates will cause considerable alarm among households and businesses given the rapidly deteriorating economic outlook and mounting cost pressures,” said Suren Thiru, head of economics at the British Chambers of Commerce.

British consumer price inflation hit a 30-year high of 7% in March, more than triple the BoE’s 2% target, and the central bank revised up its forecasts for price growth to show it peaking above 10% in the last three months of this year.

It had previously predicted a peak of about 8% in April.

The BoE said British inflation would peak later than in other big advanced economies due to a cap on household energy tariffs. Fuel bills jumped by 54% in April and the BoE now sees a further 40% increase in October, hitting the economy.

Real post-tax household disposable income – a measure of living standards – is forecast to fall 1.75% this year, the biggest calendar-year drop since 2011 and the second-biggest since the BoE’s records began in the 1960s.

Voters in local government elections on Thursday are expected to punish Prime Minister Boris Johnson over the cost-of-living crisis and for breaking his own COVID lockdown rules.

While growth in the first three months of this year has been stronger than the BoE predicted, it expects the economy to stagnate in the second quarter, due to an extra public holiday and reduced COVID testing. It sees a nearly 1% fall in GDP in the final quarter as the next energy price rise kicks in.

Those forecasts were based on bets in financial markets that the BoE would increase rates to about 2.5% by the middle of next year, which the central bank signalled was probably too much.

It said it expected inflation would fall to 1.3% in three years’ time, based on market pricing for interest rates, as higher unemployment and the cost-of-living squeeze hit the economy. That would be the biggest undershoot relative to its 2% target since the 2008-09 global financial crisis.

The BoE also said it would work on a plan to start selling the government bonds it has bought since that crisis, which currently stand at just under 850 billion pounds ($1.05 trillion).

BoE staff would update the Monetary Policy Committee on the plan at its August meeting which would “allow the Committee to make a decision at a subsequent meeting on whether to commence sales”.