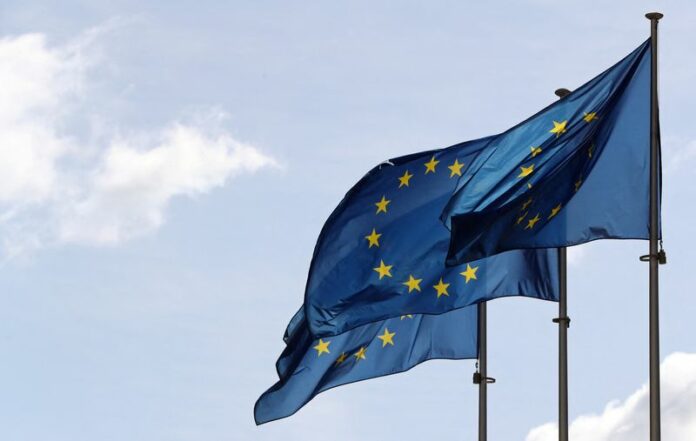 © Reuters. FILE PHOTO: The European Union flags flutter ahead of the gas talks between the EU, Russia and Ukraine at the EU Commission headquarters in Brussels, Belgium September 19, 2019. REUTERS/Yves Herman

BRUSSELS (Reuters) – The European Commission on Wednesday proposed its sixth and toughest round of sanctions against Russia yet that could be signed off by ambassadors of EU governments later in the week.

Below are the main elements of the package:

The Commission proposed a complete import ban on all Russian oil, seaborne and pipeline, crude and refined. The ban will be phased in with purchases of crude oil coming into force within six months and refined products by the end of the year.

Because of their high dependency on Russian oil and limited possibilities of buying crude elsewhere, Hungary and Slovakia will be able to continue to buy Russian crude oil until end of 2023 under existing contracts.

The Commission wants to remove Sberbank, Russia’s largest bank, from the international SWIFT transaction and messaging system as well as two other major banks. The Commission did not provide the names of the two banks, but EU officials told Reuters they were Credit Bank of Moscow and the Russian Agricultural Bank.

The Commission is proposing to increase the list of individuals banned from entering the EU and whose assets in the EU are frozen by adding high-ranking military officers and other individuals who committed war crimes in the Ukrainian town of Bucha and who are responsible for the “inhuman siege” of the city of Mariupol. The Commission has not yet provided further details.

They will not be allowed to distribute their content in the EU via cable, satellite, on the internet or via smartphone apps because the EU believes they spread Kremlin disinformation.

The Commission is proposing to prohibit European firms from providing accounting, consulting and public relations services to Russian companies.