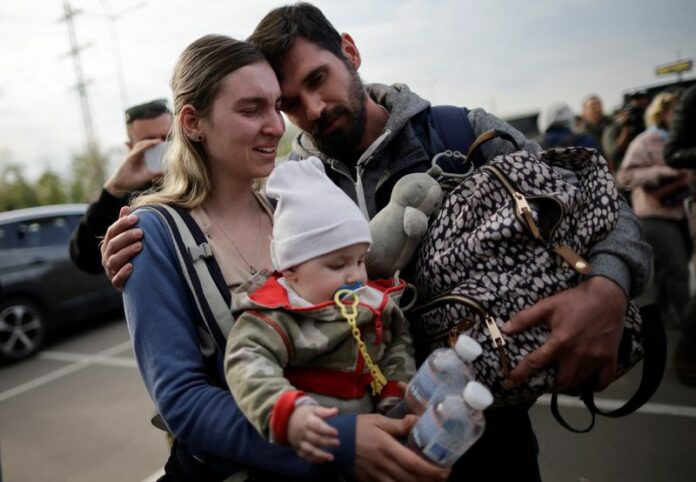 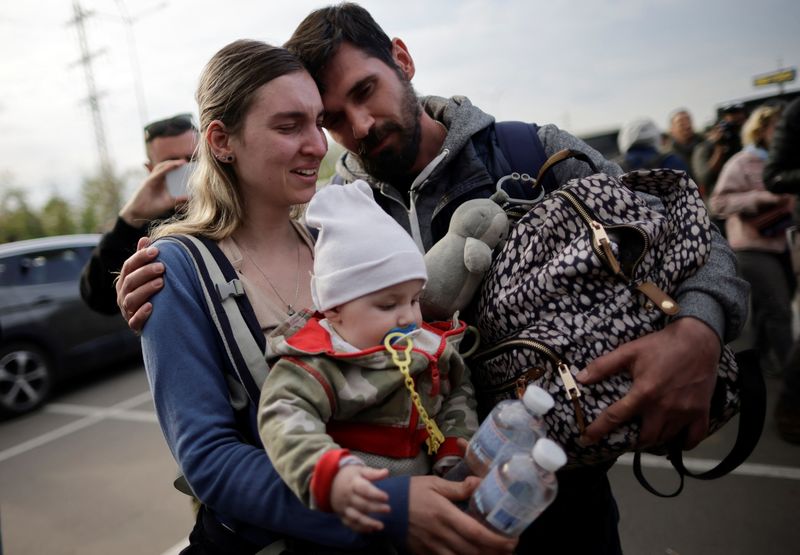 © Reuters. FILE PHOTO: A family of Ukrainian evacuees from Mariupol embraces after arriving at a registration centre for internally displaced people, amid Russia’s invasion of Ukraine, in Zaporizhzhia, Ukraine May 3, 2022. REUTERS/Ueslei Marcelino

KYIV (Reuters) – Civilians will need to be dug from bunkers under a steel works that is the last holdout of resistance in Ukraine’s Mariupol, President Volodymyr Zelenskiy said on Thursday, after a Russian bombardment that has littered the area with concrete debris.

Having failed to capture the capital Kyiv in the early weeks of an invasion that has killed thousands and flattened towns and villages, Russia has accelerated attacks in southern and eastern Ukraine, including on the Azovstal steel works in Mariupol.

Ukraine’s resistance at the plant underscores Russia’s failure to capture major cities in a war that has united Western powers in arming Kyiv and punishing Moscow with sanctions. Sweden and Finland are expected to decide very soon whether to join NATO, in what would be a major historical shift.

Russia’s military promised to pause its activity in Azovstal during Thursday daytime and the following two days to allow civilians to leave, after what Ukrainian fighters described as “bloody battles” prevented evacuations on Wednesday. The Kremlin said humanitarian corridors from the plant were in place.

Ukrainian officials believe around 200 civilians remain trapped along with fighters in the network of underground bunkers at the sprawling Soviet-era Azovstal complex.

In an early morning address, Zelenskiy said Ukraine stood ready to ensure a ceasefire in Mariupol, a port city that after a weeks-long siege Russia controls – apart from the steel works.

“It will take time simply to lift people out of those basements, out of those underground shelters. In the present conditions, we cannot use heavy equipment to clear the rubble away. It all has to be done by hand,” Zelenskiy said.

“God forbid more shells hit near the bunkers where the civilians are,” said Tetyana Trotsak, an Azovstal evacuee among dozens who reached a Ukraine-controlled town this week, describing her two-and-a-half hour walk to get across a short stretch of ground strewn with rubble at the plant.

Mariupol has been an important target in Russia’s efforts to cut Ukraine off from its Black Sea grain and metals export routes, as well as to link Russian-controlled territory in the east of the country to Crimea, seized by Moscow in 2014.

The United Nations and Red Cross evacuated hundreds of people from the city and other areas this week.

Nobody from Azovstal was among more than 300 civilians evacuated on Wednesday from Mariupol and other areas in southern Ukraine, the U.N. humanitarian office said.

We “stand ready to help” any trapped civilians, Jens Laerke, spokesperson for the office, said in an email.

Sweden and neighbour Finland stayed out of NATO during the Cold War, but Russia’s invasion of Ukraine has prompted them to rethink their security arrangements.

Sweden received U.S. assurances that it would receive support during the period that a potential application to join NATO is processed by the 30 nations in the alliance, Foreign Minister Ann Linde (NYSE:LIN) said on Wednesday.

Russian President Vladimir embarked on the war partly to counter the expansion of the NATO alliance, which Ukraine also wants to join.

Sweeping sanctions from the United States and its European allies have hobbled Russia’s $1.8 trillion economy while billions of dollars worth of military aid has helped Ukraine frustrate the invasion.

Ukrainian officials said they have killed about 12 Russian generals on the battlefield, the newspaper said. The Pentagon and the White House did not immediately respond to Reuters’ requests for comment on the report.

A source said EU envoys could reach a deal as early as Thursday on a plan to phase out imports of Russian crude oil within six months and refined products by the end of this year. It requires agreement by all 27 EU governments.

The plan also targets Russia’s top bank, its broadcasters, and hundreds of individuals. It would follow U.S. and British oil bans and be a watershed for the EU, the world’s largest trading bloc, which remains dependent on Russian energy.

The Kremlin said Russia was weighing responses to the EU plan, which it said would be costly for European citizens.

Ukraine and Russia said fighting had been heavy across the south and east over the past day.

Ukrainian authorities reported shelling of towns near a frontline that divides territory it holds in the Donetsk and Luhansk regions from land held by Russian-backed separatists.

Russia said it had killed 600 Ukrainian soldiers overnight. Reuters could not independently verify the battlefield reports by either side.

Pavlo Kyrylenko, governor of the eastern Donetsk region in which Mariupol is located, said at least 25 civilians were wounded as Russian forces shelled Kramatorsk, a town that in April suffered a missile strike on a train station that killed dozens of evacuating civilians.

A school and a kindergarten were damaged in the new attack, the town’s mayor said.

More than five million Ukrainians have fled abroad since Putin launched the invasion on Feb. 24. Millions more are displaced inside Ukraine.

Russia calls its actions a “special operation” to disarm Ukraine and protect it from fascists. Ukraine and the West say the fascist allegation is baseless and that the war is an unprovoked act of aggression.