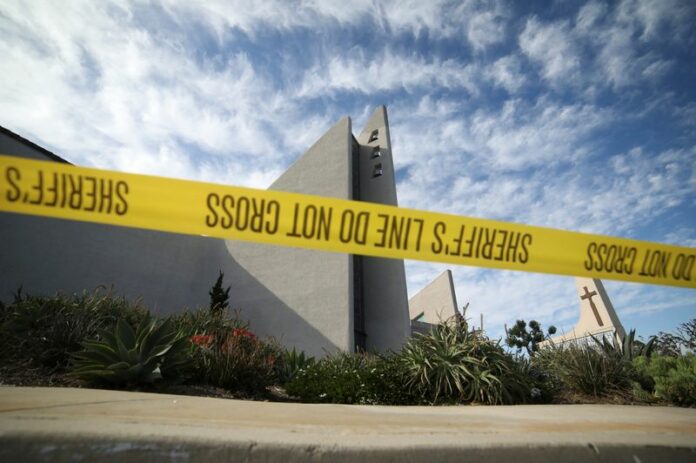 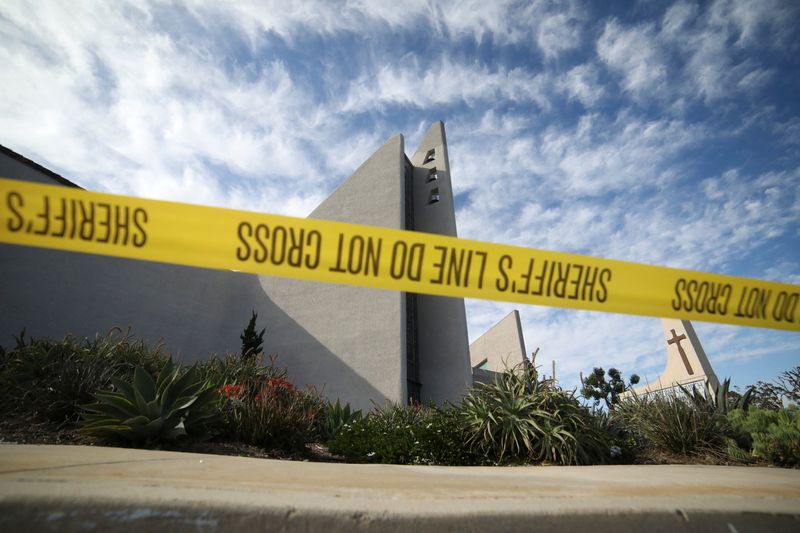 © Reuters. The Geneva Presbyterian Church is seen after a deadly shooting, in Laguna Woods, California, U.S. May 15, 2022. REUTERS/David Swanson

LOS ANGELES (Reuters) -A gunman opened fire in a Southern California church during a lunch banquet on Sunday, killing one person and wounding five, before churchgoers detained the suspect and hog-tied his legs with an electrical cord, authorities said.

Police responded to the incident that unfolded at about 1:30 p.m. local time (2039 GMT) at the Geneva Presbyterian Church in Laguna Woods and arrested an unidentified suspect in his 60s, Orange County Undersheriff Jeff Hallock told a news conference.

“That group of churchgoers displayed … exceptional heroism and bravery in intervening to stop the suspect. They undoubtedly prevented additional injuries and fatalities,” he said.

One person died at the scene while four other victims were critically wounded. Another person suffered minor injuries, he said. All of the injured were taken to hospitals.

About 30 to 40 people were in the church when the shooting occurred, Hallock said.

“At this time, we do not know what the suspect’s motive may be or whether he had an intended target, or whether this is even a hate-related incident,” Hallock said, adding that authorities believe the suspect does not live in the area.

Two handguns were found at the scene.

“No one should have to fear going to their place of worship. Our thoughts are with the victims, community, and all those impacted by this tragic event,” Governor Gavin Newsom’s office said on Twitter (NYSE:TWTR).

It was at least the second mass shooting of the weekend in the United States, which has been plagued with gun violence in recent years. In Buffalo, New York, on Saturday, a white 18-year-old man opened fire at a supermarket in a mostly Black neighborhood, killing 10 and wounding three in what authorities described as a purely racist attack.