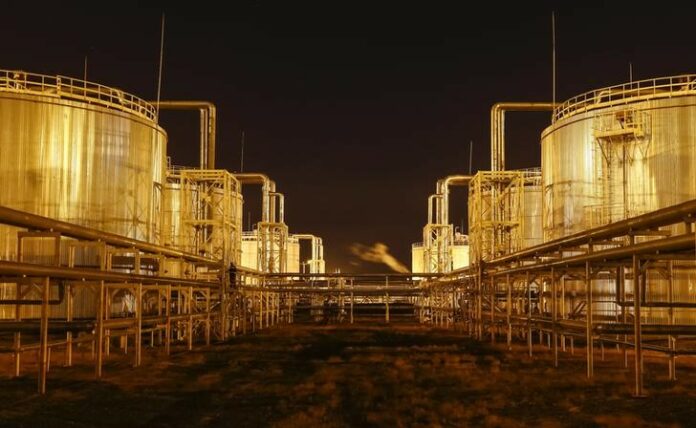 © Reuters. China in Talks With Russia to Buy Oil for Strategic Reserves

(Bloomberg) — China is seeking to replenish its strategic crude stockpiles with cheap Russian oil, a sign Beijing is strengthening its energy ties with Moscow just as Europe works toward banning imports due to the war in Ukraine.

Beijing is in discussions with Moscow to buy additional supplies, according to people with knowledge of the plan who asked not to be named as the matter is private. Crude would be used to fill China’s strategic petroleum reserves, and talks are being conducted at a government level with little direct involvement from oil companies, said one person.

Oil has rallied this year following Russia’s invasion of its smaller neighbor, but the price of its own crude has tumbled as buyers step away to avoid damaging their reputation or being swept up in financial sanctions. That’s provided an opportunity for China to cheaply replenish its vast strategic reserves, which are typically tapped during times of emergencies or sudden disruptions.

The foreign ministries for both China and Russia didn’t immediately respond to requests for comment.

Details on volumes or terms of a potential deal haven’t been decided yet, and there’s no guarantee an agreement will be concluded, said one person.

The US and UK have pledged to ban Russian oil imports and the European Union is discussing similar steps, but crude from the OPEC+ producer is still flowing to willing buyers including India and China. For the Asian nations, the heavily discounted oil is an opportunity too good to pass up, part of the reason why China has continued to take cargoes originating from Iran and Venezuela.

Refiners in China have been quietly buying Russian crude since the invasion, even as a Covid-19 resurgence dents consumption in the world’s biggest crude importer. Apparent oil demand last month slumped 6.7% year-on-year as strict lockdowns confined millions to their homes. The outbreak has capped further gains in oil prices, although Brent is still up more than 40% this year.

China doesn’t publicly disclose the size of its crude inventories, but a number of companies use tools such as satellites to estimate supplies. Some forecast the nation has the capacity to store more than 1 billion barrels of combined commercial and strategic stockpiles. Third-party estimates also indicate supplies have swelled recently due to the Covid-19 outbreak.

“There is still room to replenish stocks and it would be a good opportunity for them to do so, if they can be sourced on commercially attractive terms,” said Jane Xie, a senior oil analyst at data and analytics firm Kpler.

China sold crude from its strategic reserves last year in a historic move to try and tame oil prices, which had soared as major economies rebounded from the pandemic. The action had little lasting impact, only depleting stockpiles and raising the prospect that China would need to restock at higher prices.

Not long after the sales, the US named China along with other major Asian oil consumers including India and Japan as participants in a coordinated release of strategic reserves. It’s unclear whether China tapped its emergency stockpiles as part of this US-led initiative.