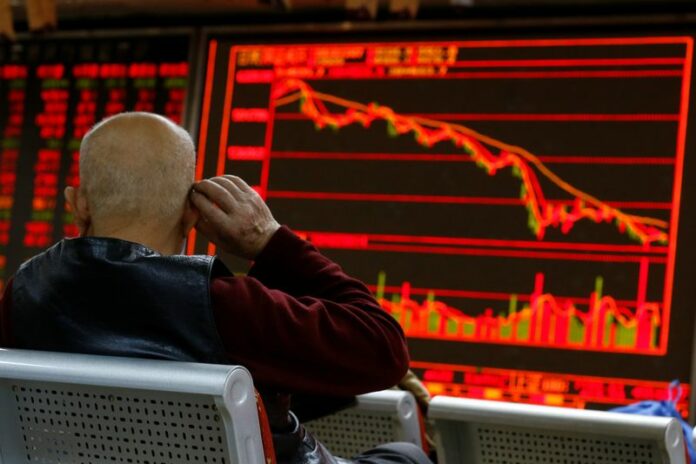 © Reuters. FILE PHOTO – An investor sits in front of a board showing stock information at a brokerage office in Beijing, China, December 7, 2018. REUTERS/Thomas Peter

NEW YORK (Reuters) – Global equities fell further on Thursday, unable to sustain a late rally on Wall Street, as investors dumped stocks on fears of sluggish growth and bought safe-haven assets such as government debt and the Swiss franc.

Supply chain woes continued to fuel inflation and growth concerns as Cisco Systems Inc (NASDAQ:CSCO) warned of persistent component shortages, knocking its shares down 13.7%. The plunge made it the latest big name stock this week to post its largest decline in more than a decade.

Data showed factory output in the U.S. Mid-Atlantic region decelerated far more than expected in May with the business outlook for the six months ahead the weakest in more than 13 years, a regional Federal Reserve bank survey said.

Some megacap growth stocks that have underperformed this year posted gains but the rally fizzled. The Dow Jones Industrial Average fell 0.75%, the S&P 500 lost 0.58% and the Nasdaq Composite dropped 0.26%.

Big slides for Walmart (NYSE:WMT) on Tuesday and Target (NYSE:TGT) on Wednesday have demoralized investors who wonder about rising costs across the supply chain, said Michael James, managing director of equity trading at Wedbush Securities.

“You got a pretty severe shock to the system for portfolio managers with the combination of those two,” James said. “That type of damage is hard to repair, piled on top of the extremely challenging year that technology investors have had,” he said.

But James said there are those view market as being extremely oversold and “you’re due for some kind of a bounce.”

Traders are looking for a catalyst that will turn the market around as a near-term bottom approaches, said Rick Meckler, president of hedge fund LibertyView Capital Management LLC.

But, “there’s probably still enough fear among investors to see a few more downdrafts,” he said.

Goldman Sachs (NYSE:GS) estimates a 35% probability of a U.S. recession in the next two years, while Morgan Stanley (NYSE:MS) sees a 25% chance of one in the next 12 months.

U.S. spot power and natural gas prices soared to their highest in over a year in some U.S. regions as Americans cranked up air conditioners during a spring heatwave.

The dollar fell across the board, pulling back further from a two-decade high, as most other major currencies drew buyers.

GRAPHIC: Worst start to a year for world stocks (https://fingfx.thomsonreuters.com/gfx/mkt/byvrjdrjdve/Pasted%20image%201652952015101.png)

Central banks have been walking a tightrope, trying to regain control of decades-high inflation without causing painful recessions.

“We will have to discuss what we can do together in our respective areas of responsibility to avoid stagflation scenarios,” German finance minister Christian Lindner said as he arrived for a two-day meeting of top central bankers near Bonn.

Oil prices rebounded from two days of losses in a volatile session, bolstered by weakness in the dollar and expectations that China could ease some lockdown restrictions that could boost demand.

U.S. gold futures settled up 1.4% at $1,841.20 an ounce, as a weaker dollar and Treasury yields burnished bullion’s safe-haven appeal.