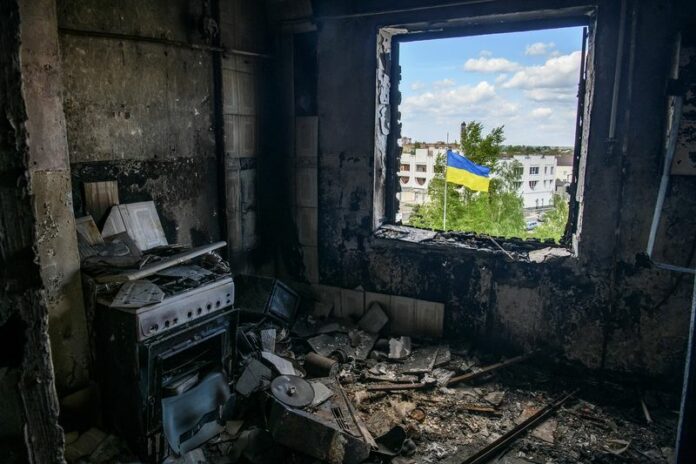 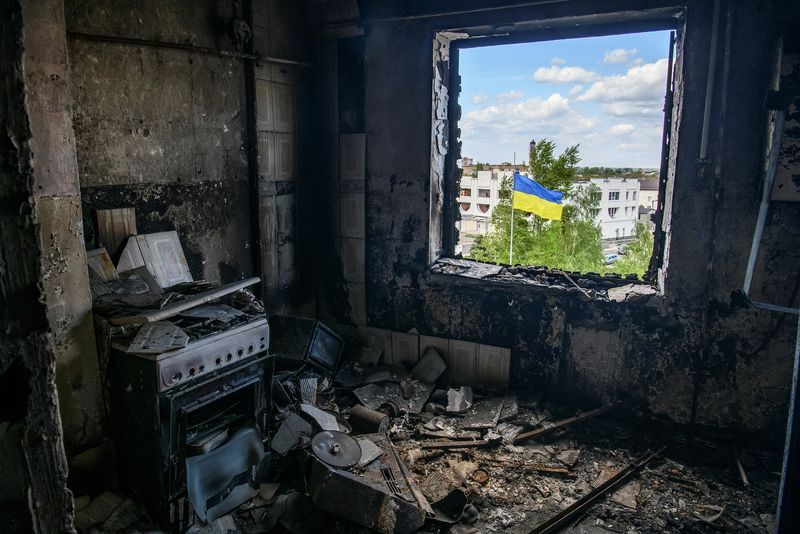 © Reuters. Ukrainian national flag is seen through the window of an apartment destroyed during Russia’s invasion of Ukraine in the town of Borodianka, in Kyiv region, Ukraine May 13, 2022. REUTERS/Vladyslav Musiienko

(Reuters) – Russia stopped delivering gas to Finland in an escalation of a dispute over energy payments with Western nations, and claimed victory in a weeks-long battle for Mariupol’s devastated Azovstal steel plant as it presses for control of the Donbas.

* Russia’s defence ministry said on Friday the last group of Ukrainian forces holed up in Mariupol’s Azovstal steelworks had surrendered.

* The Russian military said it had destroyed a major consignment of Western arms in Ukraine’s Zhytomyr region, west of Kyiv, using sea-launched Kalibr cruise missiles. Reuters could not independently verify the report, which also said Russian missiles had struck fuel storage facilities near Odesa on the Black Sea coast and shot down two Ukrainian Su-25 aircraft and 14 drones.

* Ukraine on Saturday ruled out agreeing to a ceasefire with Russia and said Kyiv would not accept any deal with Moscow that involved ceding territory.

* U.S. President Joe Biden signed a bill to provide nearly $40 billion in aid for Ukraine as part of efforts to boost military support over Russia’s invasion, the White House said.

* Turkish President Tayyip Erdogan, who has objected to Sweden and Finland joining NATO, held phone calls with the leaders of the two countries on Saturday and discussed his concerns about terrorist organisations.

* Britain wants to send modern weaponry to Moldova to protect it from the threat of invasion by Russia, The Telegraph reported, citing Foreign Secretary Liz Truss.

* Russia rushed forward two payments on its international debt on Friday in its latest attempt to stave off a default that has looked on cards since its invasion of Ukraine.