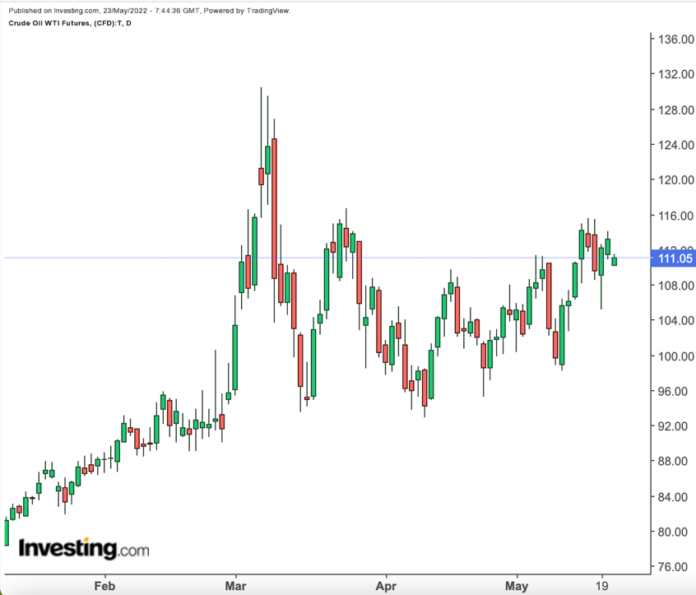 Gains in US fuel prices, already at record highs over the past two weeks, could accelerate during the run-up to Memorial Day on May 30, which will power the start of the peak driving season in the United States.

Aside from the continued tick-up in pump prices of US gasoline and diesel, crude oil could see a heightened rally too—although uncertainties about how serious China is in reopening Shanghai from a two-month-long COVID lockdown might put a lid on the market’s gains in the world’s largest importer of the commodity. The dramatic turnaround in WTI’s fortunes is a reflection of how the trade is prioritizing US crude over its UK rival given the outsized demand situation versus production for almost all forms of energy in the United States.

But he also cautioned that WTI’s upside would be critically dependent on prices holding above $108.50. Adding:

“Breaching this support will push WTI down to $105, which is an invalidation point for the current uptrend.”

The US peak driving season traditionally begins on Memorial Day weekend at the end of May and ends on Labor Day in September.

“Refineries are typically in ramp-up mode to feed US drivers’ unquenching thirst at the pump.”

Despite fears about soaring fuel prices potentially denting demand, mobility data from TomTom and Google had climbed in recent weeks, showing more people were on the roads in places like the United States.

A weaker dollar on Monday also sent oil higher, as that makes crude cheaper for buyers holding other currencies. The Dollar Index, which pits the greenback against six other major currencies, posted its first weekly decline in six last week. In Monday’s Asian trade, the dollar hovered at 102.67 versus its 20-year high of 105.06 from last week.

Even so, some analysts said oil’s gains were capped by concerns about China’s efforts to crush COVID with lockdowns, even as it prepared to reopen Shanghai on June 1 from a two-month-long lockdown.

The economic curbs in China, the world’s top oil importer, have hammered industrial output and construction, prompting moves to prop up the economy, including a bigger-than-expected mortgage rate cut last Friday.

“COVID-19 lockdowns are a transitory drag on demand in China, although elsewhere demand is holding up well,” ANZ analysts said in a note. Gold also moved higher on the dollar’s weakness as the trade awaited the Fed’s minutes from its May policy meeting, scheduled for release on Wednesday.

Adding to gold’s momentum was its oversold weekly stochastic reading of 20/19, the chartist said. “This calls for rebound,” he added.

“However, the momentum will largely depend on yields for the US 10-year Treasury note remaining under 2.80% and dropping to between 2.60% and 2.40%.

With Wall Street’s S&P 500 index on the threshold of a bear market, investors will be looking to the Fed minutes to lend insight into how aggressively the central bank’s next months will be against soaring inflation.

Fed Chair Jerome Powell is confident the central bank can achieve a “soft landing”, but Wall Street isn’t convinced the Fed can pull it off, with warnings over the prospect of a recession piling up.

Goldman Sachs strategists have predicted a 35% chance of the US economy entering a recession in the next two years, while Wells Fargo analysts expect a mild US recession at the end of 2022 and early 2023.

The Fed has already hiked interest rates by 75 basis points since March and markets are pricing in 50 basis-point rate hikes in June and July.

Powell has vowed to raise rates as high as needed to tame inflation. The minutes will show how persistent policymakers expect inflation to be and whether the economy is resilient enough to face much tighter monetary policy.

Investors will be bracing for earnings reports from Costco (NASDAQ:COST), Dollar General (NYSE:DG), and Best Buy (NYSE:BBY) in the coming week after disappointing results from big retailers last week hammered stocks, adding to fears over the outlook for the economy.

Walmart (NYSE:WMT), the nation’s largest retailer, and rival Target (NYSE:TGT) reported that while store traffic was still strong, high inflation has started to erode the purchasing power of US consumers.

While Wall Street brokerages were expecting profits to be pressured by soaring fuel costs, analysts said they were caught off guard by the rapid retrenchment among consumers and shifts toward buying lower-margin basics instead of more profitable general merchandise. The extent of inventory buildup and heavy discounting by retailers was also a bit of a shock, analysts said.

The combination of these concerns should form a bullish base for gold, which is traditionally seen as a hedge against economics and politics—although that dynamic has been watered down by the severest rate hikes in a generation planned by the Fed.