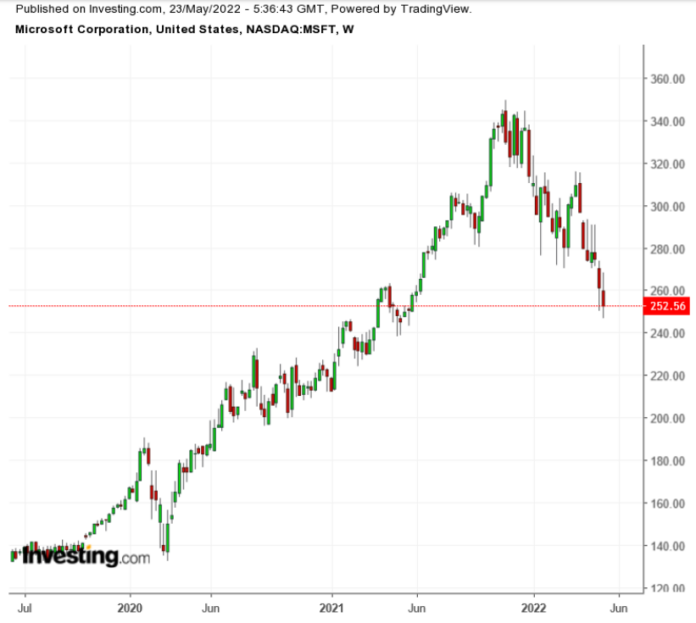 Microsoft stock is down 25% this year amid investors’ rush to avoid high-growth stocks
MSFT is a high-quality, lower risk tech giant with a wide economic moat
The company’s most recent earnings report shows that the software maker continues to remain in a strong growth mode
If you’re interested in upgrading your search for new investing ideas, check out InvestingPro+

When markets take an ugly turn, it becomes harder to see what’s wheat and what’s chaff. During the current downturn, investors are selling everything indiscriminately, pushing the value of some of the best-run companies to the point where their stocks have become quite attractive for anyone maintaining a portfolio of long-term holdings.

The US’s second most valuable company, Microsoft (NASDAQ:MSFT), is one such example. Shares are down about 25% this year amid the rush by investors to avoid high-growth stocks at a time when the Federal Reserve is aggressively tightening monetary conditions—a move that could push the economy into a recession. The current bearish spell comes after two years during which MSFT shares made some powerful gains. In 2021 alone, the software giant’s stock gained almost 55%, almost double the expansion of the benchmark Nasdaq 100 Index.

How long the current sell-off continues is anybody’s guess, but there is a strong case to be made that Microsoft stock is a good buy-on-the-dip candidate.

The Redmond, Washington-based Microsoft is a high-quality, lower risk tech giant with a wide economic moat. The software maker is among the companies which are best positioned to weather economic disruptions as well as have the strongest pricing power to offset inflationary pressures.

Microsoft is well-entrenched in the digital economy due to its diversified business model that includes a suite of Office products, its cloud services and a gaming unit. The company’s cloud computing business has been the major driving force behind the stock’s 285% advance in the past five years—a period in which its CEO, Satya Nadella, branched out into new growth areas, mainly focusing on the cloud computing arena.

This unprecedented streak of gains, according to many analysts, has more room to run. One of the major factors behind this optimism is the industry-wide transition toward cloud computing that has only just started.

Microsoft’s Azure unit, which rents computing power to startups and larger businesses, is in a position to thrive for years to come. According to Wedbush Securities, global cloud services spending will approach $1 trillion over the next decade as businesses spend more on cloud computing.

The company’s most recent earnings report shows that Microsoft continues to remain in a robust growth mode, navigating through supply chain disruptions and inflationary pressures. The Azure unit—behind only Amazon’s (NASDAQ:AMZN) AWS web service group in the cloud infrastructure services arena—posted 46% growth in the company’s fiscal first quarter, matching the rate in the second quarter and meeting estimates.

Due to these strengths, Microsoft stock remains a favorite pick among analysts. In an Investing.com poll of 50 analysts surveyed, 47 rated the stock a ‘buy’ with an average price target that implies about 44% upside potential. Similarly, according to a number of valuation models, including P/E or P/S multiples or terminal values, the average fair value for MSFT stock on InvestingPro stands at $312.71, a potential 24% upside from the current market value.

RBC, in a note last week, reiterated Microsoft as outperform, saying the company will prove resilient in a recession. Its note adds:

“We hosted virtual investor meetings with Microsoft investor relations. Our key takeaways include: 1) no change to macro/demand commentary, and we believe the business model would prove resilient in the case of a recession; 2) impact from salary increases are minimal, and we still expect margin expansion in FY23.”

“Recently, we have seen increased investor nervousness regarding the future growth opportunities for the Microsoft Oﬀice franchise. However, we believe that recognizing the large opportunity the company has by just driving deeper Teams penetration should put these concerns to rest. In turn, this should reconfirm Microsoft as a premium investment in our software universe.”

Microsoft’s strong balance sheet and dividend program offer another solid reason for investors looking to take refuge in the current uncertain times. MSFT currently pays $0.62 quarterly for an annual yield of 0.93%. But with cash reserves exceeding $130 billion, the company has enough firepower to support its stock through share buybacks and dividend hikes.

Though Microsoft, along with other tech giants, may decline further in the current market sell-off, this weakness should be taken as a buying opportunity in the case of MSFT shares. It offers a chance to take a position in an excellent business that for which there’s little threat to its competitive advantage.