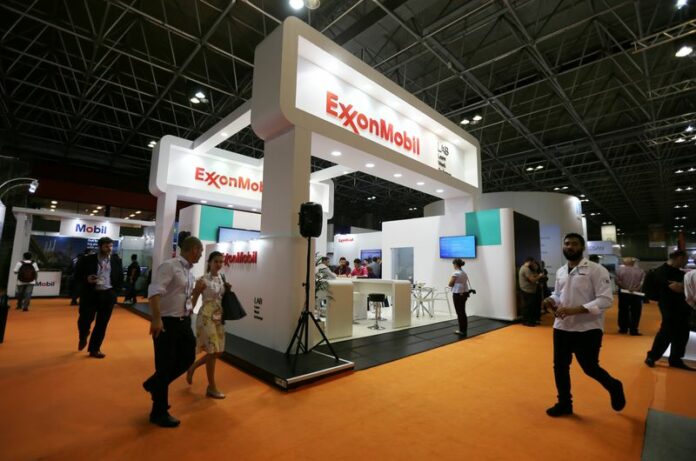 © Reuters. FILE PHOTO – People walk near the booth of the Exxon Mobil Corp at the Rio Oil and Gas Expo and Conference in Rio de Janeiro, Brazil September 24, 2018. REUTERS/Sergio Moraes

PIRC, or Pensions & Investment Research Consultants, is the latest proxy firm to urge investors to oppose proposals by the oil major’s board. Other large oil companies have enjoyed an so far in 2022 when compared with last year’s meetings.

PIRC said Woods, which also serves as chief executive officer, should be held accountable as chairman for assuring the company’s strategy to meet Paris-aligned goals to reduce carbon emissions. It also said his serving in the chairman and CEO roles represents “a concentration of power” potentially detrimental to board balance.

The Wednesday meeting includes a vote only on Woods’s role as chairman, not as CEO.

PIRC also suggested a no vote on re-electing Alexander Karsner, one of the directors put up by activist hedge fund Engine No. 1 last year, as well as Michael Angelakis, Susan Avery and Ursula Burns.

In addition, PIRC urged shareholders to vote against the company’s executive compensation plan on Wednesday. In a report, PIRC said former top executives are granted benefits not extended to active workers such as reimbursement of personal expenses and travel arrangements after retirement.

Exxon said in a written response that its compensation and benefits programs are designed to support the company’s core principles and business strategies and are market competitive for all employees.

Glass Lewis and ISS, firms that also make recommendations to shareholders, have recently backed a shareholder activist proposal on climate at Exxon’s meeting. They ask for an audited report assessing the International Energy Agency’s net-zero scenario by 2050 and its possible effects on Exxon’s strategy.