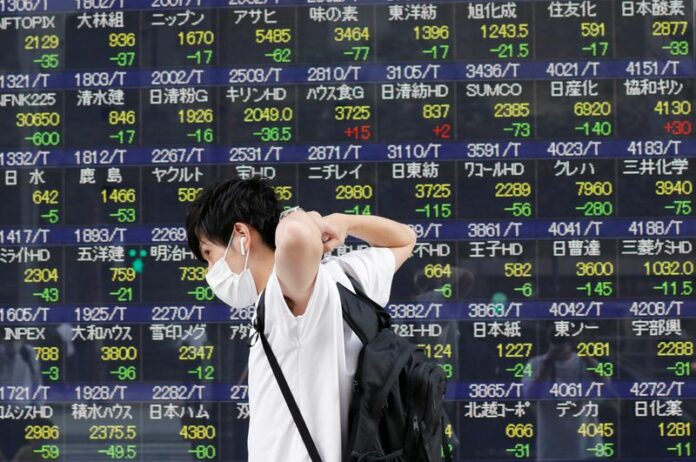 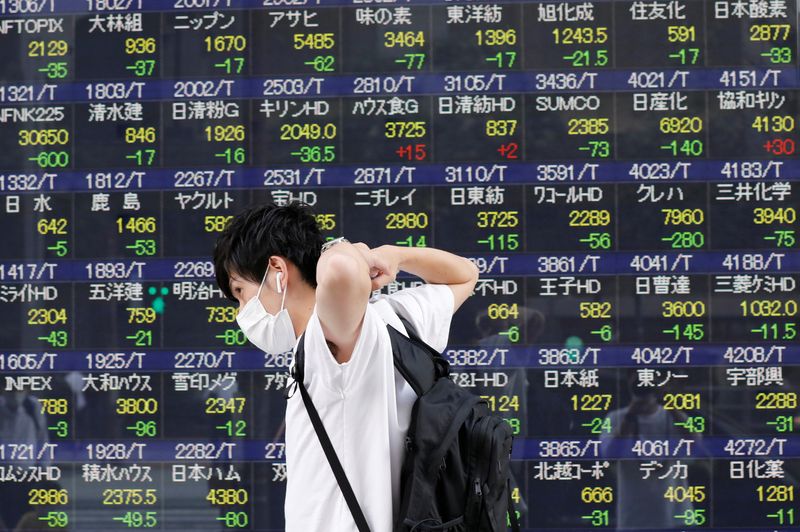 © Reuters. A man wearing a protective mask, amid the COVID-19 outbreak, walks past an electronic board displaying Japan’s Nikkei index outside a brokerage in Tokyo, Japan, September 21, 2021. REUTERS/Kim Kyung-Hoon

The U.S. dollar index =USD – which measures the currency against six major rivals – rebounded 0.16% to 101.92, a level not seen since April 26. Meanwhile the kiwi hit a three-week high of $0.65 after the New Zealand central bank raised rates by an aggressive 50 basis points and signalled more to come.

New home sales in the U.S. fell 16.6% month-on-month in April, the largest decline in nine years, sending U.S. Treasuries yields down to one-month lows as investors turned once again to safety. The benchmark 10-year note was at 2.766% and the 2-year yield was at 2.522%.

But Atlanta Fed President Raphael Bostic warned headlong rate hikes could create “significant economic dislocation” and was among a handful of Fed policymakers who favour reducing the pace of rate hikes later in the year if inflation cools.

Investors in Asia remain similarly nervous about growth being impacted by the effects of persistent Chinese COVID-19 lockdowns, which threaten to undermine recent stimulus measures in the world’s second-largest economy.

“In Asia, investor debate centers on whether or not China’s easing policies are sufficient to offset downward pressures,” Stephen Innes of SPI Asset Management said in a note.

“Fiscal multipliers will be minimal in an economy where economic activity have slowed sharply. Moving beyond mobility restrictions in short order is a pre-condition, but not a guarantee, for an Asia-led economic recovery.” Gold prices dipped 0.19% to $1,862.27 per ounce, having risen to their highest in two weeks on Tuesday, as the greenback gained. Oil prices climbed more than 1% on the prospect of tight supplies. U.S. crude futures rose to $111.05 a barrel, and Brent rose to $114.86.