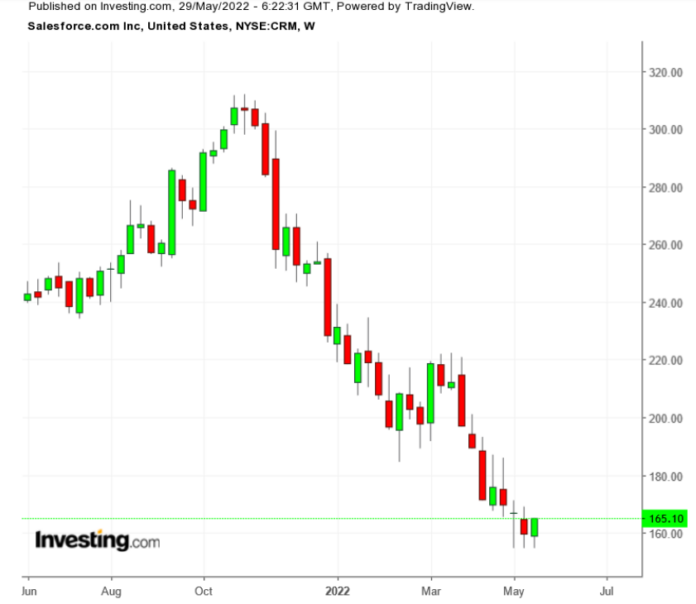 3 Stocks To Watch In The Coming Week: Salesforce.com, Chewy, CrowdStrike

During the upcoming, holiday-shortened week, US markets may still continue their rebound amid speculation that the Federal Reserve is ‘past peak hawkishness,’ thus might not be as aggressive in hiking interest rates as investors originally anticipated.

All three major indices scored big gains in the previous week, each rising higher than 6%. Both the S&P 500 and NASDAQ Composite broke a seven-week losing streak, while it had been eight weeks of losses for the Dow Jones Industrial Average.

Stock markets have been extremely volatile amid uncertainty over the Fed’s pace of policy reversal and its impact on the economy. After suffering major losses, some investors now feel that weakening data on housing and inflation might help the central bank to pause or slow the pace of tightening later this year.

During the coming trading week, when markets will be closed on Monday for the Memorial Day holiday, we’re focusing on the following three stocks:

Salesforce.com (NYSE:CRM) will be reporting its fiscal 2023, first-quarter earnings on Tuesday, May 31 after the market closes. The company, which sells enterprise software and cloud-based services to corporate clients, is forecast to report $7.38 billion in revenue and $0.94 of earnings per share. In March, the San Francisco-based company provided a strong forecast for quarterly and annual revenue as the leader in customer relations software further integrates Slack and expands its product line. Revenue for the full year will be as much as $32.1 billion, according to the company.

Salesforce bought Slack, an instant messaging platform, for $27.7 billion last year as part of its push to increase the value and utility of its flagship software which lets businesses manage and interact with customers.

CRM shares, which closed on Friday at $165.10, have lost 35% of their value this year as investors rushed to sell high-growth players.

The online pet-products retailer, Chewy (NYSE:CHWY), will report its latest quarterly earnings on Wednesday, June 1, before the market open. Analysts are predicting $0.10 a share loss on sales of $2.41 billion. In the aftermath of the pandemic-driven boost to e-commerce sales—when customers sheltering in place stocked up on food and toys for pets—Chewy is facing a tough road ahead. The retailer gave a weaker revenue forecast in late March for the current year as it navigates through escalating costs and supply-chain disruptions that have led to more items being out of stock.

In a letter to shareholders, the company said:

The stock has fallen 54% this year after more than doubling in the prior year. Shares closed on Friday at $27.11.

The cloud-based cybersecurity provider CrowdStrike Holdings (NASDAQ:CRWD) is scheduled to release its fiscal 2023, first quarter earnings on Thursday, June 2 after the market close. Analysts expect $0.23 a share profit on sales of $463.8 million. Austin, Texas-based CloudStrike provides cloud workload and endpoint security, advanced threat intelligence, and cyberattack response services to global clients. The tech company has been one of the major beneficiaries of a surge in spending by global companies and governments to make their networks secure from hackers and attacks by adversaries.

Relationships with partners such as Amazon Web Services (NASDAQ:AMZN) are helping CrowdStrike increase revenue, which is poised to grow at three times the rate of the broader cybersecurity market through 2025, according to Bloomberg Intelligence. CRWD stock closed at $166.82 on Friday, after falling 18% this year.

France says inflation control is the main priority for 2023 budget