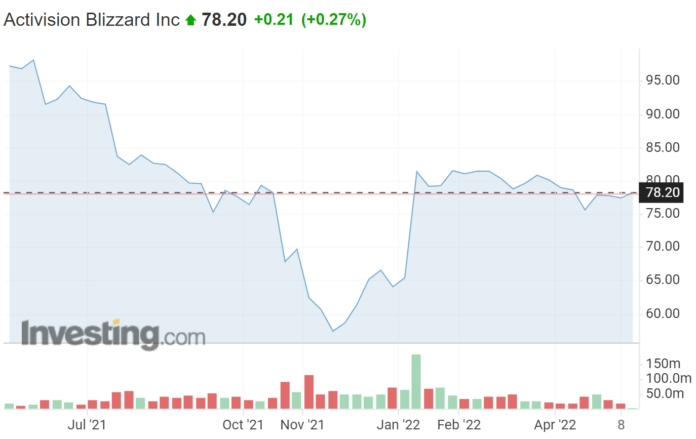 Microsoft’s acquisition of Activision Blizzard has shareholder approval
$95 per share offer depends on regulatory approval
Consensus view is that the deal will close
Market-implied outlook favors deal-closing, but substantial probability of failure and a subsequent decline in share price
If you’re interested in upgrading your search for new investing ideas, check out InvestingPro+

Since then, the shares have drifted lower, reflecting concerns about if the Federal Trade Commission (FTC) and other regulators will approve the deal. The antitrust concerns are not surprising, given that the deal would make MSFT the third largest gaming company in the world.

The terms of the acquisition were overwhelmingly approved by ATVI shareholders at the end of April. Pending regulatory approval, the deal is expected to close before July 2023. While it is common for shares of an acquisition target to trade at a discount relative to the offer price, the current spread ($95 vs. $78.20) indicating that the market is assigning a substantial probability to the deal failing to close.

On Nov. 15, 2021, I maintained my neutral rating on the stock. At that time, ATVI was trading at $69.69 and the share price had fallen substantially—24.4% for the YTD and 33% over the past 12 months. After my post, the shares continued to decline and closed at nearly $62 in early January. The quarterly earnings fell short of expectations for Q4 of 2021 (reported on Feb. 3) and for Q1 of 2022 (reported on Apr. 25). The planned acquisition, especially now that it has shareholder approval, changes things substantially, so I am revisiting my rating.

For readers who are unfamiliar with the market-implied outlook, a brief explanation is needed. The price of an option on a stock reflects the market’s consensus estimate of the probability that the stock price will rise above (call option) or fall below (put option) a specific level (the option strike price) between now and when the option expires. By analyzing the prices of put and call options at a range of strike prices, all with the same expiration date, it is possible to calculate a probabilistic price forecast that reconciles all of the options prices. This is the market-implied outlook. For a deeper explanation than is provided here and in the previous link, see this excellent monograph published by the CFA Institute.

Given the planned acquisition, the fundamentals are primarily important for the range of outcomes that may occur if the deal does not close. The Wall Street consensus and the market-implied outlook provide the basis for assessing the prevailing view on whether the deal will be completed. I have calculated the market-implied outlook for ATVI to early 2023 and I compare this with the current Wall Street consensus outlook in revisiting my rating for ATVI.

E-Trade calculates the Wall Street consensus outlook for ATVI by aggregating the views of 9 ranked analysts who have published price targets and ratings over the past 3 months. The consensus rating is bullish and the consensus 12-month price target is $95.56, which is 22.2% above the current share price. The spread among the individual price targets is extremely low, demonstrating that all of the analysts expect the acquisition to close. Investing.com’s version of the Wall Street consensus outlook is calculated using price targets and ratings from 27 analysts. The consensus rating is bullish and the consensus average 12-month price target is $94.91, about 21.4% above the current share price. The prevailing view is that a share of ATVI is worth what MSFT has proposed to pay for it. There is, of course, some possibility that the deal will not happen or that it will be delayed for some extended period of time.

I have calculated the market-implied outlook for ATVI for the 7.7-month period from now until Jan. 20, 2023, using the prices of call and put options that expire on this date. I chose this specific expiration date to provide a view through the end of 2022 and because the options expiring in January are heavily traded. I considered also running an outlook using options that expire in June of 2023, which would provide an outlook closer to when the acquisition is expected to close, but the options trading at this later date was very thin.

The standard presentation of the market-implied outlook is a probability distribution of price return, with probability on the vertical axis and return on the horizontal. The market-implied outlook for ATVI is unlike any that I have calculated previously because there are two substantial distinct peaks in probability. The first, and higher probability, cluster has a maximum in probability corresponding to a price return of 15%. The second range of outcomes has a peak corresponding to a price return of -7.5%. For contrast, compare this to the previous market-implied outlook with a single peak and which is consistent with typical results.

Having two distinct peaks in the market-implied outlook is very intuitive, given the binary outcomes–one with the acquisition being on track and one in which this is not the case. The expected volatility of this distribution is 24% (annualized), which is low. The market-implied outlook is indicating that the most probable outcome is for ATVI’s acquisition to go forward, in which case investors can expect a gain of around 15% between now and early 2023, with the remaining spread persisting as a discount that reflects the remaining potential for the deal to fail.

Theory indicates that the market-implied outlooks are expected to be negatively biased because investors, in aggregate, tend to be risk-averse and thus should be willing to pay more than fair value for downside protection. There is no way to measure that this effect is present, but such a bias would mean that the market-implied outlook should be interpreted as even more tilted to favor the deal closing than it appears.

While ATVI shareholders approved Microsoft’s offer, there are significant regulatory hurdles. In this situation, the attractiveness of owning ATVI shares mainly depends on the estimated probability that the acquisition will close.

To examine this question, I have looked at two forms of consensus outlooks. The first, the Wall Street analyst consensus, indicates that the deal will close and that, as a result, the shares will be worth $95. The market-implied outlook, which reflects the consensus view among buyers and sellers of options, is that there is a substantial probability that the deal will not be completed, although the probability of a successful completion is greater.

The bi-modal market-implied outlook is very intuitive in showing these outcomes. Given that both the Wall Street consensus and the options market consensus favor the success of the deal, my rating on the stock is buy / bullish.