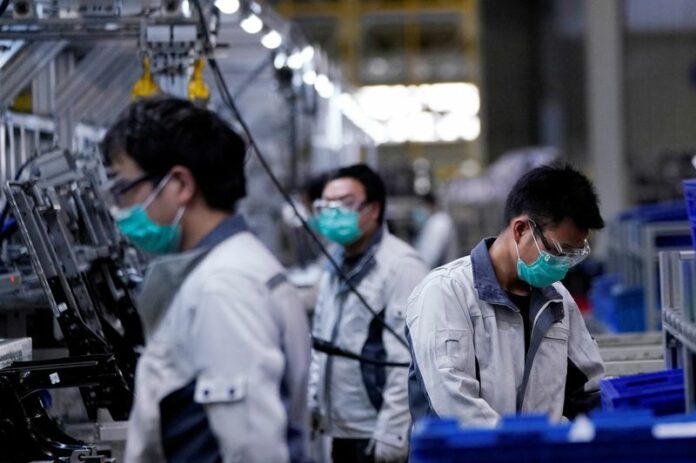 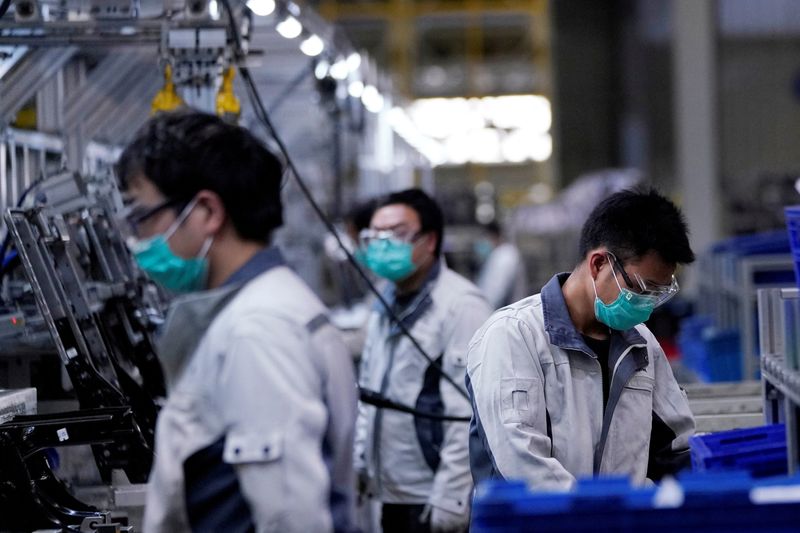 © Reuters. FILE PHOTO: Employees wearing face masks work on a car seat assembly line at Yanfeng Adient factory in Shanghai, China, as the country is hit by an outbreak of a new coronavirus, February 24, 2020. REUTERS/Aly Song

BEIJING (Reuters) – China’s factory activity likely contracted at a slower pace in May, a Reuters poll showed, as some virus curbs were lifted in key manufacturing hubs.The official manufacturing Purchasing Manager’s Index (PMI) is expected to rise to 48.6 in May from 47.4 in April, marking the third straight month of contraction, according to the median forecast of 30 economists polled by Reuters on Monday. A reading below 50 indicates contraction from the previous month, above 50 expansion.

Early signs suggest that conditions improved a little in May, after the manufacturing PMI tumbled in April to the second-weakest on record, Julian Evans-Pritchard, an economist at Capital Economics, said in a note.

“Some manufacturers in Shanghai that had to halt operations in April were allowed to resume production this month. And measures implemented in the major manufacturing hubs of Changchun and Shenyang were rolled back. The lifting of intercity restrictions also eased supply chain disruptions,” he said.

The commercial hub of Shanghai, located at the heart of manufacturing in the Yangtze River Delta, is taking gradual steps towards ending a prolonged city-wide lockdown on June 1. Tesla (NASDAQ:TSLA) added a second shift at its Shanghai plant on Thursday, heading towards making 2,600 cars daily.

Analysts say factories are only slowly ramping up production levels going by the weak growth in steel production and depressed power generation.

China’s economy still faces downward pressure in the second quarter, with problems in the property sector and some places still stuck in lockdown.

Compared with a 4.8% growth in the first quarter, many private-sector economists expect the economy to shrink this quarter from a year earlier given the government has shown no sign of relaxing its “zero-COVID” policy.

On Wednesday, Premier Li Keqiang said China will strive to ensure reasonable economic growth in the second quarter and lower the unemployment rate as soon as possible.

The official PMI, which largely focuses on big and state-owned firms, and its sibling survey for the services sector, will be released on Tuesday.

The private-sector Caixin manufacturing PMI, which focuses more on small firms and coastal regions, will be published on Wednesday. Analysts expect a headline reading of 48.0, up from 46.0 for the previous month.