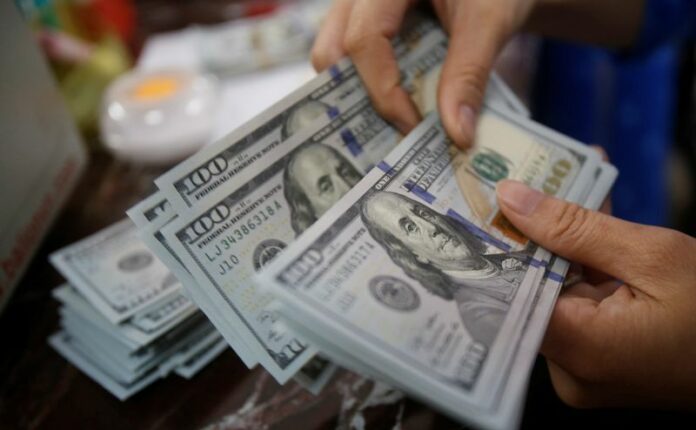 © Reuters. FILE PHOTO: An employee of a bank counts US dollar notes at a branch in Hanoi, Vietnam May 16, 2016. REUTERS/Kham/File Photo

LONDON (Reuters) -The U.S. dollar resumed its slide on Monday as risk appetite across markets tentatively strengthened, supported by encouraging economic data and bets that the Federal Reserve will tighten policy at a slower pace.

The dollar index – which tracks the greenback against six major rivals – is on track for its first monthly drop in five, as the safe-haven currency loses steam after a breakneck start to the year.

Trade was likely to be light through Monday as U.S. stock and bond markets close for the Memorial Day public holiday.

Data on Friday showed that U.S. consumer spending rose more than expected in April as households boosted purchases of goods and services, and the rise in inflation slowed.

Analysts said the encouraging data, coupled with bets on a more cautious tightening path by the Fed, was weakening the dollar.

The offshore-traded Chinese yuan strengthened as much as 1% versus the dollar on the reopening news, and was last up 0.6% at 6.6802 yuan per dollar.

“How the US consumer plays out from here and from a global perspective how the Chinese economy performs will be crucial determinants for broader investor risk appetite,” currency analysts at MUFG said in a note.

A slew of further economic data is due this week which could give clues on the outlook for global growth, including U.S. jobs numbers and Chinese Purchasing Managers’ Index figures.

Inflation data from Germany and Spain on Monday showed price rises accelerated in May, pushed up by soaring energy prices, ahead of euro zone inflation figures on Tuesday.

Cryptocurrencies attempted a bounce but bitcoin, which rose 4%, is still pinned around $30,000.