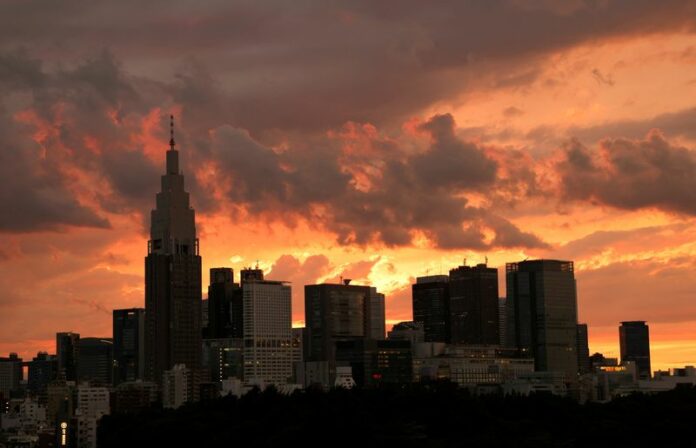 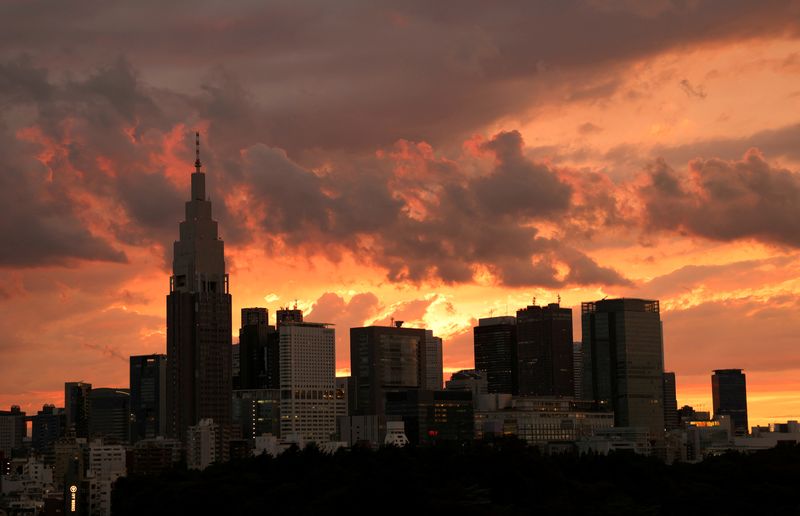 © Reuters. FILE PHOTO: A view of the skyline and buildings at Shinjuku district during sunset in Tokyo, Japan June 20, 2021. REUTERS/Pawel Kopczynski

TOKYO (Reuters) – Japan’s economy will grow at a weaker rate than previously thought this quarter despite hopes for a strong rebound in consumption after showing resilience in the three months through March, a Reuters poll of economists showed.

The world’s third-largest economy is at risk of being hobbled by slowing economic growth in China and a surge in global raw material prices – both issues that could hurt Japan’s key manufacturing sector, the poll showed.

However, the slower expansion still indicates growth will be strong enough for the economy to recover to its pre-coronavirus pandemic levels of end-2019 this quarter, about 70% of poll respondents said.

The economy was projected to expand an annualised 4.5% this quarter, below April’s estimate for 5.1% growth, according to the median forecast of 36 analysts in the May 18-27 poll.

“The speed at which the economy is recovering at home is slow,” said Takumi Tsunoda, senior economist at Shinkin Central Bank Research Institute.

“Corporate profit could be severely squeezed if raw material prices continue to rise as there’s limited pass-through of those costs into final prices.”

A slowdown in Chinese economic growth was the most-frequently cited issue posing a risk to Japan’s economy in the latter half of the year, the poll showed.

China’s hard-handed measures against the pandemic have already led to a fall in Japan’s shipments to and from Asia’s top economy in April, Japanese trade data showed earlier this month.

Asked when Japan’s economy would recover to pre-coronavirus levels of end-2019, 20 of 28 economists said it would happen this quarter, after shrinking less than expected in January-March.

Five chose next quarter, while two opted for October-December and one picked April-June next year.

But analysts also said that even if the economy were quick to recover to end-2019 levels, it was likely to still fall short of higher levels seen earlier that year, before taking a hit from a sales tax hike in October 2019.

“The economy will likely exceed its pre-sales tax hike level in July-September next year,” said Tsunoda.

Looking ahead, economists’ second-most frequently cited risk for the second half of 2022 was “soaring raw material costs”, followed by “faster than expected U.S. monetary policy tightening”.

Other choices were “spreading of new coronavirus variants”, “semiconductor chip and parts shortages” and “negative impact of domestic price rises on private consumption”.

But none cited a persistently weaker yen as the biggest risk to the economy in the second half of the year.

The poll also found core consumer prices, which exclude volatile fresh food prices, will rise 2.0% this fiscal year, which runs through March next year, and 0.9% in fiscal 2023.

Both forecasts showed analysts expected growth to come in slightly weaker than what they expected in last month’s poll.