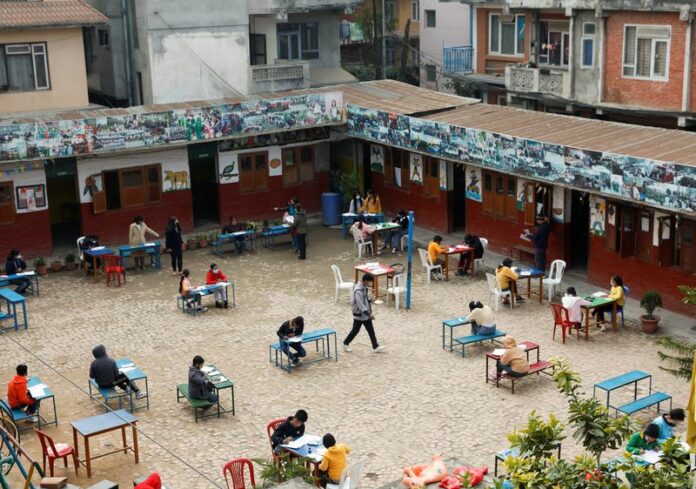 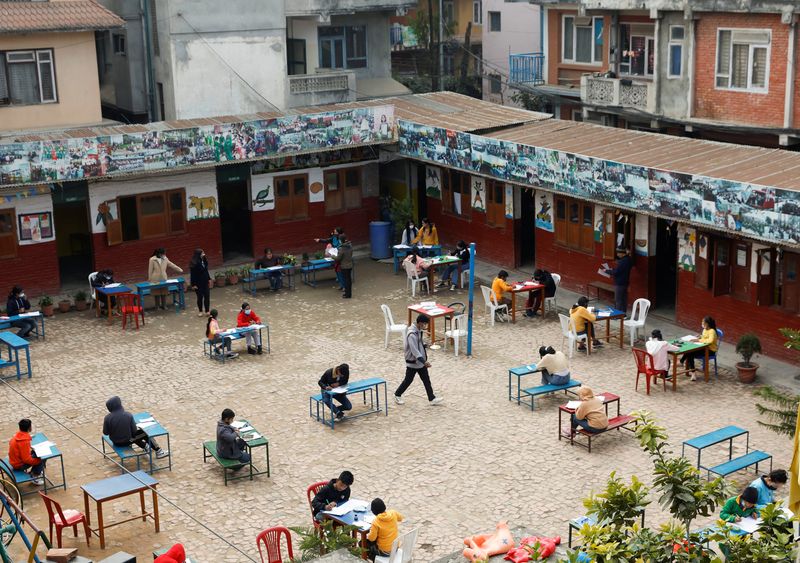 © Reuters. FILE PHOTO: Students maintain social distance as they study inside the compound of a school amid the spread of coronavirus disease (COVID-19) outbreak in Kathmandu, Nepal February 3, 2022. REUTERS/Navesh Chitrakar

KATHMANDU (Reuters) – Nepal’s economy is expected to expand by 5.8% in the current financial year ending mid-July, helped by a pick-up in economic activity following a fall in COVID-19 cases, the finance minister said on Sunday.

The growth estimates were higher than 4.3% year-on-year growth in the previous year, but lower than earlier projection of 7% growth for the current fiscal year, as the rising energy and food prices have hit consumer spending and firms’ investments.

Nepal has ended almost all pandemic-related restrictions, imposed to curb the spread of the novel coronavirus and took several steps to revive the economy hit by the pandemic.

“As the impact of COVID-19 is minimal, the economic and social life is becoming normal,” Finance Minister Janardan Sharma said, presenting the annual budget in the parliament for the new financial year beginning mid-July.

He said economic indicators except those relating to external sector, were “satisfactory”.

Ishwari Prasad Bhandari, a director at the government’s Central Bureau of Statistics (CIS) said the good economic growth was due to a rise in hydroelectric power generation, growth in construction as well as the wholesale and retail trade.

Nepal has seen a surge in food and energy prices as annual retail inflation accelerated to a five-year high of 7.3%, amid the risk of social unrest as imports of goods like fuel, coal and edible oil become costlier.

Sharma said the government would soon reduce fuel prices which were increased by up to 12.5% last week saying global prices had spiked in the wake of Russia’s invasion on Ukraine but gave no details.

The government has banned luxury goods imports until mid-July amid dwindling forex reserves, which fell 18.2% to $9.61 billion on mid-April from mid-July, according to the central Nepal Rastra Bank (NRB) data.

Officials said the pandemic would not have much impact on economic activities by mid-July when the current financial year ends.