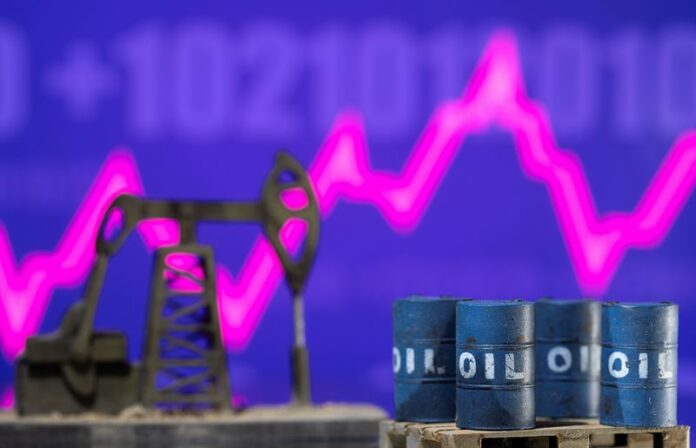 © Reuters. FILE PHOTO – Models of oil barrels and a pump jack are displayed in front of a rising stock graph and “$100” in this illustration taken February 24, 2022. REUTERS/Dado Ruvic/Illustration

SINGAPORE (Reuters) -Oil prices rose on Tuesday after EU agreed to slash oil imports from Russia by the end of 2022, fuelling worries of a tighter market already strained for supply amid rising demand ahead of peak U.S. and European summer driving season.

U.S. West Texas Intermediate (WTI) crude futures were trading at $117.31 a barrel, up $2.24 from Friday’s close. There was no settlement on Monday due to a U.S. public holiday.

European Union leaders agreed in principle to cut 90% of oil imports from Russia by the end of 2022, resolving a deadlock with Hungary over the bloc’s toughest sanction yet on Moscow since the invasion of Ukraine three months ago.

However, some experts said oil price gains may be muted as the market had already priced in the supply constraints.

Almost every EU member was on board with the ban, suggesting the market was “already pricing in EU self-sanction and significantly less Russian oil flowing to Europe this year”, SPI Asset Management Managing Partner Stephen Innes told Reuters.

“I think the market is pricing in some more Asia demand via China; however, the glaring concerns are the skyrocketing petrol prices at the pump that could lead to some driving season demand destruction,” Innes added.

Demand from China is expected to pick up after the easing of COVID-19 curbs. Shanghai has announced an end to its two-month-long lockdown, and will allow the vast majority of people in China’s largest city to leave their homes and drive their cars from Wednesday.

On the production side, OPEC+ is set to stick to last year’s deal at its meeting on Thursday, with a modest July output hike by 432,000 barrels per day, six OPEC+ sources said, rebuffing Western calls for a faster increase to lower surging prices.

Members from the group – the Organization of the Petroleum Exporting Countries and allies led by Russia – maintain that the oil market is balanced and that the recent price hikes are not related to fundamentals.

Oil prices on both sides of the Atlantic have soared to their highest in over a decade in 2022 and are up more that 55% so far this year.