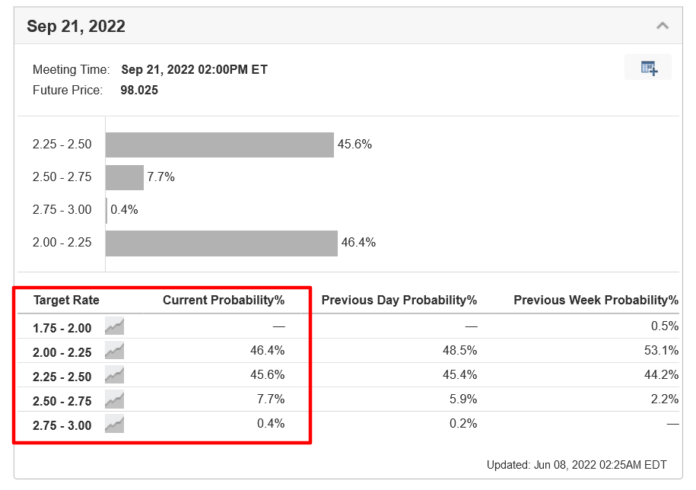 U.S. CPI is anticipated to show inflation stayed near a 40-year peak in May.
The Federal Reserve is all but certain to raise interest rates by another half a percentage point at the conclusion of its June policy meeting.
Investors should consider adding Palo Alto Networks, Phillips 66, and Bank of America to their portfolio.
For tools, data, and content to help you make better investing decisions, try InvestingPro+.

Worries over sky-high inflation and the Federal Reserve’s aggressive plans to raise interest rates have been the primary drivers of market sentiment for most of the year.

As such, all eyes will be on Friday’s key U.S. consumer price index report, which arrives less than a week before the Fed’s highly anticipated June policy meeting.

For now, the market expects a half-point rate hike at both the Fed’s June and July meetings. However, a hotter-than-expected CPI print could trigger fresh bets toward a 75-basis-point move in July, and possibly September. The U.S. central bank has already raised its Fed Funds target rate by 75 basis points so far this year.

Taking that into account, below, we highlight three companies that are leaders in their respective fields that are set to outperform in the months ahead as the Fed tightens monetary policy to combat soaring inflation.

Palo Alto Networks (NASDAQ:PANW) is widely considered one of the leading names in the cybersecurity software industry. The company serves over 70,000 organizations in 150 countries, including 85 of the Fortune 100.

In our view, shares of the Santa Clara, California-based tech company are well positioned to resume their march higher in the months ahead, considering the ongoing surge in cybersecurity spending amid the current geopolitical environment.

In a sign of how well its business has performed amid the existing geopolitical backdrop, Palo Alto Networks reported profit and sales which crushed expectations for its fiscal third quarter on May 19, thanks to ballooning demand for its security software.

The earnings beat was fueled by a strong increase in total billings, a key sales growth metric, which surged 40% from a year earlier to $1.8 billion.

The cyber specialist also provided an upbeat outlook, lifting its full-year guidance for revenue, billings, and earnings per share due to favorable cybersecurity demand trends.

Not surprisingly, in an Investing.com survey of 36 analysts, 33 rated PANW stock as a ‘buy,’ three rated it as ‘neutral,’ and none considered it a ‘sell.’

Among those surveyed, the stock had a roughly 20.5% upside potential with an average 12-month price target of $635.35, as it looks to be one of the main beneficiaries of the continuing growth in cybersecurity spending. One of the leading energy manufacturing and logistics companies in the U.S., Phillips 66 (NYSE:PSX), debuted as an independent company when ConocoPhillips (NYSE:COP) executed a spin-off of its downstream and midstream assets in 2012.

With robust year-to-date returns, Phillips 66 remains one of the best names to own as the Fed raises rates, considering its latest efforts to return more cash to shareholders in the form of stock buybacks and higher dividend payouts.

The oil refiner recently announced plans to restart share repurchases after suspending the program in March 2020 due to the coronavirus pandemic.

It also raised its quarterly dividend by 5% to $0.97 per share. This represents an annualized dividend of $3.88 and a yield of 3.53%, making it an extremely attractive play under current conditions.

In addition, Phillip 66’s stock has a comparatively low price-to-earnings (P/E) ratio of 18.4, making it cheaper than other notable names in the oil & gas refining space, such as Marathon Petroleum (NYSE:MPC), and Valero Energy (NYSE:VLO).

The diversified energy company is auspiciously placed to reap the benefits of improving energy market fundamentals, soaring global fuel demand, and strong oil and gas prices, which will help drive future profit and sales growth and allow it to maintain its focus on shareholder returns.

According to a number of valuation models, including P/E or P/S multiples or terminal values, the average fair value for PSX stock on InvestingPro+ stands at $126.30, a potential 14.9% upside from the current market value. Bank of America (NYSE:BAC) is one of the country’s ‘Big Four’ banking institutions, along with JPMorgan Chase (NYSE:JPM), Wells Fargo (NYSE:WFC), and Citigroup (NYSE:C).

BAC closed at $36.35, with the stock being down about 18% year-to-date. At current levels, BofA has a market cap of around $293 billion, making it the second-biggest U.S. banking institution, behind JPM.

Despite growing fears that the Fed’s aggressive monetary tightening could potentially tip the economy into a recession, Bank of America stands to benefit from the ongoing uptick in rates across the Treasury market resulting from the current inflationary environment.

Banks are among those most sensitive to rising interest rates as higher yields tend to boost the return on interest that lenders earn from their loan products, or net interest margin.

In fact, BAC noted in its first quarter earnings report that a 100-basis-point increase in interest rates would boost its net interest income by $5.4 billion over the next 12 months.

Additionally, the banking giant—whose stock has a relatively cheap P/E ratio of 10.3—offers an annualized dividend of $0.84 per share at a yield of 2.31%, above the implied yield for the S&P 500, which is currently at 1.41%.

Indeed, 15 out of 28 analysts surveyed by Investing.com rate Bank of America’s stock as “outperform,” while the remaining 13 considered it as a ‘hold.’

The average BAC stock analyst price target is around $47.00, representing an upside of approximately 30% from current levels over the next 12 months. Similarly, the quantitative models in InvestingPro+ point to a gain of roughly 24% in BAC stock from current levels over the next 12 months, bringing shares closer to their fair value of $45.09.