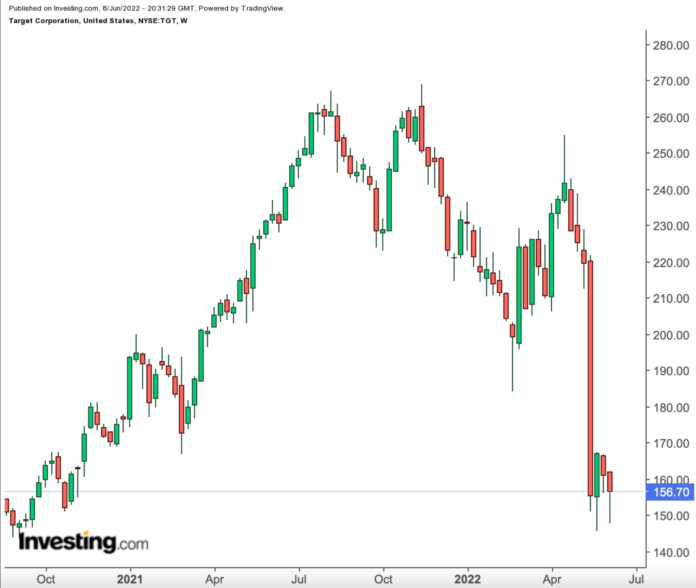 Target Stock: After 32% Plunge, Should It Still Be Part Of Your Income Portfolio?

Target is the worst performer among big-box retailers this year
The rapidly worsening outlook underscores Target’s struggle to adjust to unexpected shifts in demand amid soaring inflation
Despite short-term inventory challenges, Target continues to remain a solid dividend pick for income investors

If you’re interested in upgrading your search for new investing ideas, check out InvestingPro+

After producing remarkable gains during the pandemic, one of the US’s largest retailers, Target (NYSE:TGT), has been experiencing a sudden and steep reversal in its fortunes. Shares of the Minneapolis, Minnesota-based discount department store are down 32% this year, the worst performance among big-box retailers. The bearish spell comes after the retail giant reported worse-than-expect first-quarter earnings last month and warned investors about even more significant margin cuts in the months ahead. Markets saw the news as a warning of broad US recession risks, triggering the stock’s biggest one-day plunge since 1987.

During the pandemic, Target and other retailers benefited from rising sales of higher-margin goods such as kitchen appliances, television sets, and furniture. This trend helped push TGT shares to a 180% bull run since the March 2020 crash.

But as consumers shifted buying patterns due to relentless inflation, the retailer has been experiencing lower-than-expected sales. As a result, inventories have been piling up, augmenting costs and further slashing margins.

Recently, Target announced yet another cut on its profit outlook—the second in three weeks—blaming soaring merchandise stockpiles and “unusually high transportation and fuel costs.” According to the new guidance, Target will now make a 2% operating profit from sales this quarter. On May 18, the company had projected the metric would be around 5.3%.

Bank of America yesterday downgraded Target shares to neutral from buy, citing the retailer’s significant level of discretionary inventories, which does not justify its current high valuation. The firm also slashed its price target on the stock to $165 from $235.

Target has a higher relative exposure to discretionary categories than other big-box-retail peers. General merchandise comprised more than half of Target sales in 2021, while it made up about 32% of Walmart’s (NYSE:WMT) US sales, Bank of America noted.

However, in a recent interview with CNBC, Target’s Chief Executive Officer Brian Cornell reiterated his confidence in earning operating margins of 8% in the long run—even as the retailer abandoned that goal for this year. He also said to expect revenue growth in the low to mid-single digits for the full year and to maintain or gain market share in 2022.

Furthermore, Target has been using its stores more as mini distribution centers for its booming digital business to fulfill online orders.

That move comes from CEO Cornell’s efforts to make its retail outlets more attractive. He spearheaded the remodeling of hundreds of stores, introduced many affordable fashion brands, and bolstered the retailer’s e-commerce offerings.

There is no doubt that Target has suddenly found itself in a different operating environment than it experienced during the pandemic. But this short-term challenge doesn’t mean the retailer has lost its appeal to income investors.

When picking dividend-paying stocks, the biggest concern to address is whether the company can produce strong cash flows in both good and bad times. Target has an excellent track record on this front.

The company has steadily increased its dividend every year for the last 50 years, a period that covers crises such as the dot-com collapse of the early 2000s, the financial crash of 2008-2009, and the COVID-19 pandemic. While delivering cash to investors each quarter, the discount store has also maintained a very conservative payout ratio of about 30%, showing more cash-distribution runway.

In June last year, Target announced a whopping 32% hike in its payout, scaling its dividend to $0.9 a share quarterly with an annual yield of 2.3%

Despite its short-term challenges, Target continues to remain one of the best retail stocks to own due to its solid income potential and its ability to rebound quickly. The current weakness provides an attractive entry point to long-term investors.

Looking to get up to speed on your next idea? With InvestingPro+ you can find

Any company’s financials for the last 10 years
Financial health scores for profitability, growth, and more
A fair value calculated from dozens of financial models
Quick comparison to the company’s peers
Fundamental and performance charts

And a lot more. Get all the key data fast so you can make an informed decision, with InvestingPro+. Learn More »