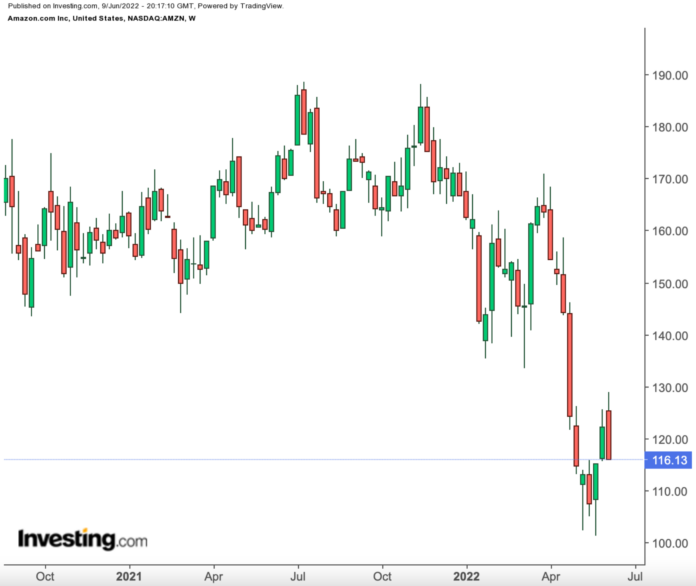 Amazon stock has lost about a third of its value this year
Despite the recent sell-off, analysts remain overwhelmingly positive
Amazon Web Services, the cloud division, remains in strong growth mode

If you’re interested in upgrading your search for new investing ideas, check out InvestingPro+

After losing 30% of their value this year, shares of the e-commerce giant Amazon.com (NASDAQ:AMZN) have become an attractive long-term play regarding risk-reward. AMZN—which performed a 20-for-1 stock split last Monday—closed Thursday at $116.13. Weakness in Amazon stock has been, in part, a consequence of the broader risk-off environment, which is prompting investors to shun tech and other growth names amid an economic backdrop marked by rising interest rates, slowing economic growth, and high inflation.

However, the selloff reached its pivotal point in April, after a worse-than-expected earnings report. The Seattle-based behemoth reported sales that rose just 7% during the first quarter of 2022, compared to the 44% expansion during the year-ago period. It marked the slowest growth rate for any quarter since the dot-com bust in 2001 and the second straight period of single-digit growth.

In an Investing.com poll of 56 analysts, 51 rate the stock as a buy; just one firm recommends selling it, while four remain neutral. The average analyst price target points to a more than 102% upside potential. BMO Capital Markets, while reiterating Amazon as its top pick, said in a note this week that the e-commerce giant would continue:

“Labor optimization is underway, and we expect fixed-cost overcapacity to be absorbed by the holiday season. Once clear of these headwinds, we expect AMZN’s position leading the secular shift to consumer e-commerce and enterprise cloud services should return to the fore.”

Amazon Web Services division, the company’s cloud unit, currently generates most of its profit, and it continues to remain in a strong growth mode. The department reported a 37% jump in sales to $18.4 billion.

In a note last week, Citi included Amazon in a list of stocks the bank thinks are oversold and make good buy-on-the-dip candidates. The list includes names such as Meta Platforms (NASDAQ:FB) and Applied Materials (NASDAQ:AMAT), the world’s largest manufacturer of machinery for manufacturing semiconductors. These companies, according to Citi, carry less exposure to macro factors, such as inflation and higher interest rates.

Amazon’s 20-for-1 stock split is another positive factor that should provide tailwinds amid the current uncertain environment. Though the move does not impact the company’s fundamentals, it could make the price more attractive to retail investors, increasing demand.

Eric Sheridan, an Amazon analyst at Goldman Sachs, said in a note:

“While not altering anything with the fundamentals, stock splits of this nature have been perceived as a shareholder-friendly move in that a lower price per share makes share ownership more accessible to a wider audience of investors.”

Since 1980, S&P 500 companies that have announced stock splits have significantly outperformed the index three-, six-, and 12 months after the initial announcement, according to Bank of America research carried out by CNBC.com.

According to the bank, stocks that have split climbed 25% on average over the next 12 months, versus 9% gains for the S&P 500.

Amazon stock may remain under pressure in the short run due to uncertainty over its earnings. But the giant’s long-term investment appeal remains intact, given its dominance in e-commerce and explosive growth in its cloud business.