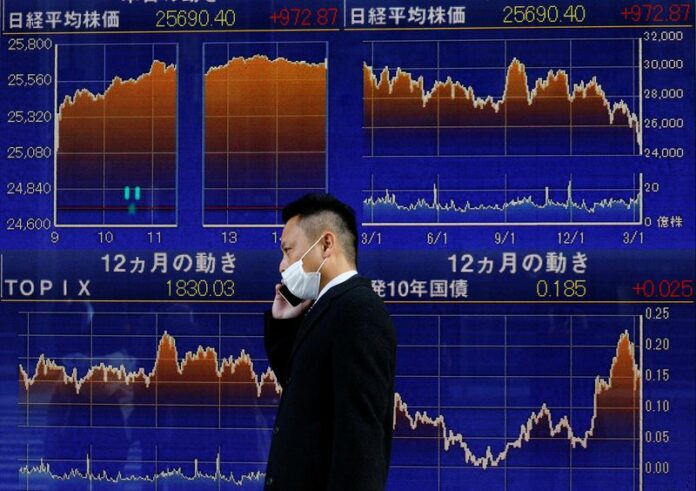 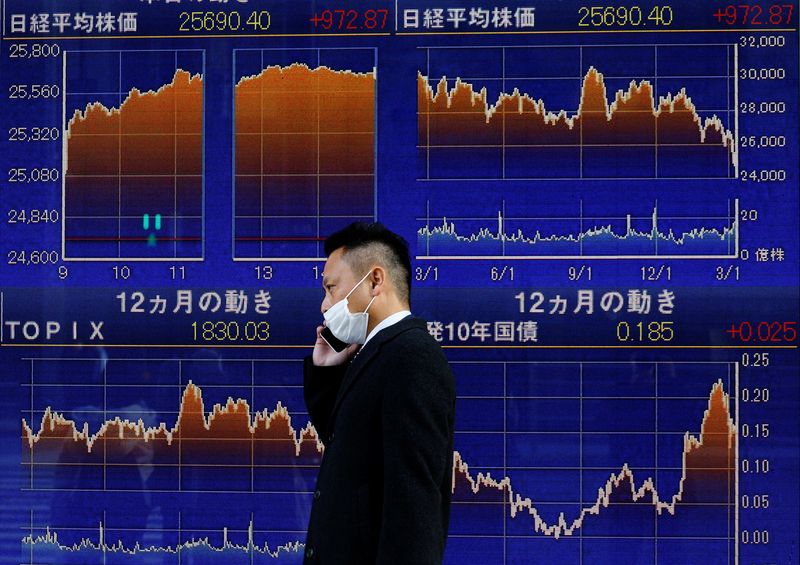 © Reuters. A man wearing a protective mask, amid the coronavirus disease (COVID-19) outbreak, walks past an electronic board displaying graphs (top) of Nikkei index outside a brokerage in Tokyo, Japan, March 10, 2022. REUTERS/Kim Kyung-Hoon

By Stella Qiu and Alun John

MSCI’s broadest index of Asia-Pacific shares outside Japan fell 0.9%, weighed down by a 1.2% drop in resources-heavy Australia and a 1.5% retreat in South Korea. Japan’s Nikkei fell 1.4%.

However, continued strong buying by foreign investors and cautious hopes of regulatory easing on tech firms lifted China stocks on Friday, despite news that the cities of Beijing and Shaanghai were back on COVID-19 alert.

Tech giants listed in Hong Kong, which took a heavy hit in early trade, reversed losses to be up 0.9%, driven by a change of fortunes in Hong Kong shares of Alibaba (NYSE:BABA), which rose 1.8%.

Despite denials from the company and the securities regulator, investors took it as a sign that a long regulatory crackdown on tech firms is easing, in line with the broad accommodative stance recently from China’s top policymakers.

“It’s a signal that Beijing has come out to tell you that they have shifted from crackdown to support, so there is no longer much uncertainty,” said Jason Hsu, founder and CIO of Rayliant Global Advisors.

“China is now starting to enter an easing circle, which is definitely a good thing for the stock market. Stocks have fallen quite a lot before, so now they will rise again and make up for the losses.I think it is quite something to look forward to.”

China’s factory-gate inflation cooled to its slowest pace in 14 months in May due to tight COVID-19 curbs, while consumer inflation also stayed subdued.

That would allow China’s central bank to release more stimulus to prop up the economy even as monetary authorities in most other countries scramble to hose down inflation with aggressive interest rate hikes.

On Thursday, the European Central Bank said it would deliver next month its first interest rate rise since 2011, followed by a potentially larger move in September.

“Global equities came under pressure after the ECB delivered its guidance, and (ECB President Christine) Lagarde noted upside inflation risks,” said analysts at ANZ in a note on Friday.

“And with energy prices still pushing higher, it is not yet clear that inflation has peaked. Fed guidance and policy actions may have to turn more hawkish for longer. Financial markets are nervous.”

The consensus forecast sees a year-over-year inflation rate for May of 8.3%, unchanged from April.

Shares on Wall Street tumbled as the market awaited the price data. The S&P 500 and Nasdaq fell more than 2% in their biggest daily percentage declines since mid-May.

In currency markets, the U.S. dollar eased 0.2%against a basket of major currencies, pulling away from its highest level in three weeks ahead of the U.S. inflation report.

On Friday, The two-year yield, which rises with traders’ expectations of higher Fed fund rates, continued its climb to be hover around the highest level since early May. It touched 2.8352% compared with a U.S. close of 2.817%.

Gold edged down on Friday and headed for a weekly fall, as Treasury yields rose. Spot gold was traded at $1844.58 per ounce. [GOL/]