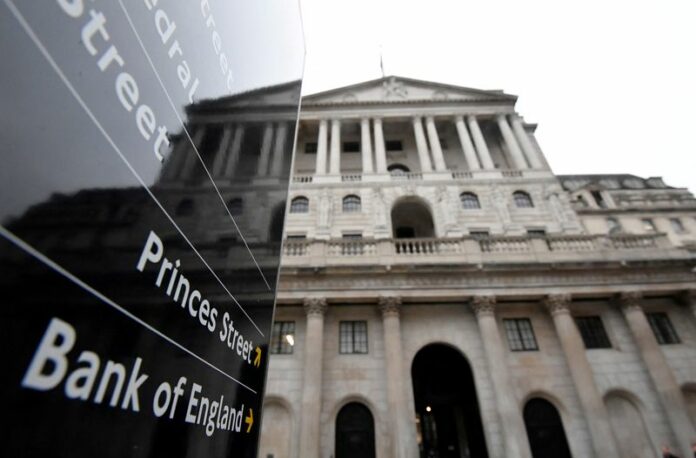 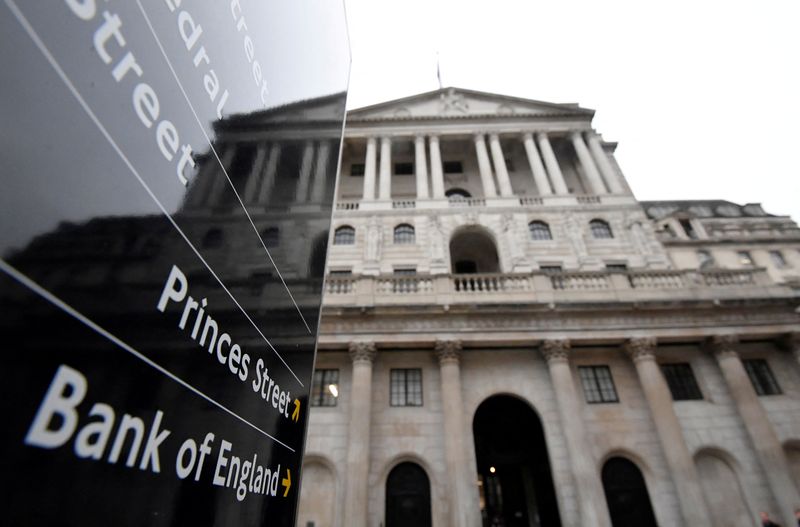 LONDON (Reuters) – The Bank of England looks set to raise interest rates next week for the fifth time since December, its steepest run of rate hikes in 25 years, and is likely to keep going in the coming months as inflation heads for double digits.

While Britain is forecast to have the weakest economy in 2023 among the world’s big, rich nations, investors and most economists are predicting a quarter-point rate hike by the BoE next Thursday.

That would take Bank Rate to 1.25%, its highest level since January 2009, when Britain’s economy was holed by the global financial crisis.

While historically low, expectations for British borrowing costs over the next couple of years have risen sharply recently and they jumped again this week when the European Central Bank flagged rate hikes at its next two meetings, including a possible half percentage-point rise in September.

Investors are betting on the BoE’s Monetary Policy Committee doubling Bank Rate to 2% by September and hitting 3% by March next year. Some economists are ramping up their forecasts too.

Sanjay Raja at Deutsche Bank (ETR:DBKGn) said on Friday he now expected rates to peak at 2.5%, up from a previous call of 1.75%, starting with a 0.25% increase next week.

“We don’t expect a unanimous decision, however. Instead, risks are skewed to a more split MPC, with at least three members on the committee looking for a bigger 50 basis-point move,” he said in a note to clients. “There’s also a possibility of an even messier vote, with one or two members looking for no change to the Bank Rate.”

The BoE was the first big central bank to start reversing its pandemic stimulus in December, before the U.S. Federal Reserve and others began to move to head off the jump in inflation caused by the reopening of the world economy after the coronavirus pandemic and then Russia’s invasion of Ukraine.

But that did not stop British inflation hitting a 4-year high of 9% in April, almost five times the BoE’s 2% target.

The BoE thinks inflation is set to surpass 10% later in 2022, when regulated energy tariffs are due to jump by a further 40%, and consumers have already reined in their spending while there are signs of a slowdown in the housing market.

Governor Andrew Bailey said in April the BoE was walking a very tight line between tackling the surge in prices and causing a recession. But with wage deals starting to climb, the BoE’s priority is to show it means business on fighting inflation.

A BoE survey published on Friday showed the public’s expectations for inflation in the year ahead at 4.6%, the highest in records going back to 1999.

Since the central bank’s last meeting in May, finance minister Rishi Sunak has given more money to households to soften the cost-of-living squeeze, reducing the risks of a recession and potentially increasing inflation pressures.

Billions of pounds of further support are expected from Sunak later this year as Prime Minister Boris Johnson fights for his political life after 41% of Conservative Party lawmakers voted to oust him on Monday.

There is also the risk of an escalation in a post-Brexit trade dispute between Britain and the European Union which could also fan inflation.

Paul Dales, an economist with Capital Economics, said investors were under-estimating the chance of a half-point rate hike by the BoE next week, especially if economic growth and labour market data due on Monday and Tuesday are strong.

Markets on Friday were pricing in a 30% chance of a half-point move by the BoE on June 16.