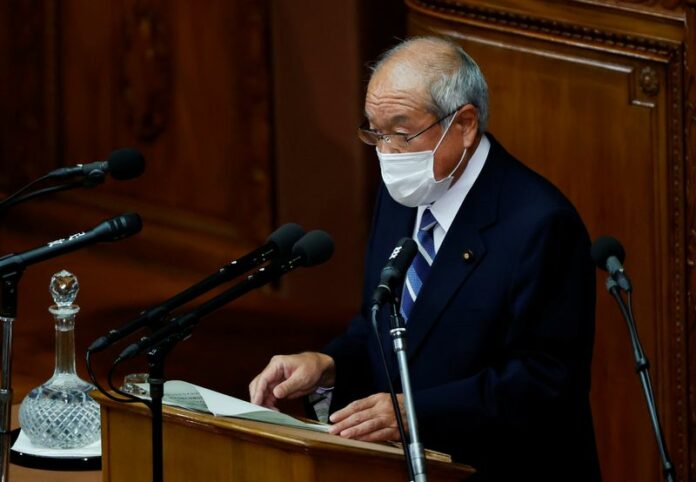 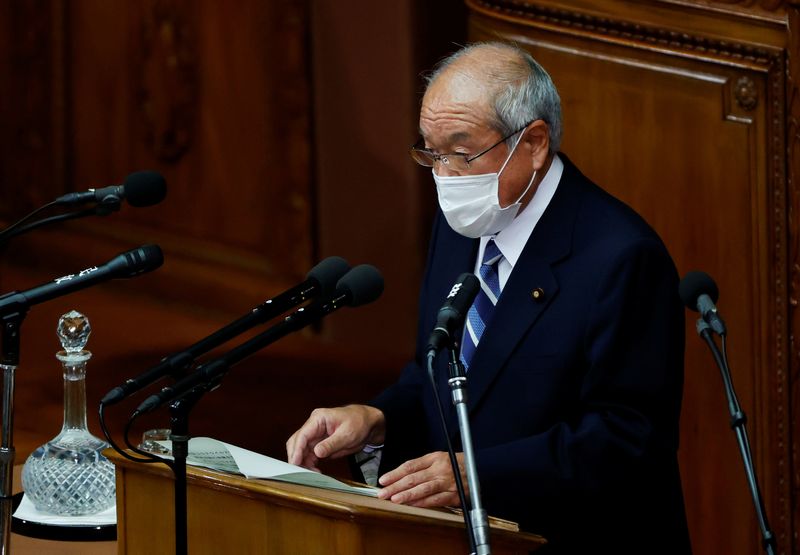 © Reuters. FILE PHOTO: Japan’s Finance Minister Shunichi Suzuki wearing a protective face mask delivers his policy speech during the start of an extraordinary session of the lower house of the parliament, amid the coronavirus disease (COVID-19) pandemic, in Tokyo, J

By Daniel Leussink and Tetsushi Kajimoto

TOKYO (Reuters) – Japanese Finance Minister Shunichi Suzuki on Friday refrained from commenting on the possibility of government intervention in the foreign exchange market to stem a weak yen, while maintaining his warning against any rapid fluctuations.

The latest jaw-boning came a day after the yen hit a fresh 20-year low against the dollar and a seven-year trough against the euro on expectations the Bank of Japan (BOJ) will continue to lag behind other major central banks in exiting stimulus policy.

Senior officials from the Ministry of Finance, BOJ and banking regulator Financial Services Agency would meet on Friday from 4 p.m. (0700GMT) to discuss global market developments, the finance ministry said.

The weak yen trend has boosted the prices of imported commodities and pushed up the cost of living for resource-deficient Japan.

“I won’t comment on currency levels, including the question (of intervention) to avoid causing any impact from an offhand comment,” Suzuki told reporters when asked about the possibility of intervention.

“What’s most important is currency stability as rapid fluctuations are not desirable,” Suzuki told a news conference, repeating the official line.

“We will continue to carefully watch currency market movements and their impact on Japan’s economy with a sense of urgency.”

The Japanese currency on Thursday weakened to a fresh 20-year low of 134.56 yen per dollar.

“Verbal intervention is not working, while it has not reached a danger zone around 145 yen that I think warrants actual intervention,” Ueno said.

The yen has lost about 14% against the dollar so far this year. It last traded at about 133.88 yen per dollar.

Japan in theory could take unilateral action by intervening, while giving U.S. authorities advanced notice of such a move, Ueno said.

“But that would upset (U.S. Treasury Secretary Janet) Yellen who is a firm believer of market-determined exchange rates, particularly at a time when the U.S. is battling rising inflation,” he added.

However, despite repeating verbal warnings against the yen’s recent weakening, Japanese authorities remain in no mood to intervene in the exchange market, partly because a strong U.S. dollar suggests the currency’s slide is due to fundamental factors.

A government source with knowledge of the matter told Reuters on condition of anonymity that the velocity of the yen’s move would matter more than any particular levels in judging the need for intervention.

Suzuki on Friday said Japan’s government would respond appropriately based on the Group of Seven agreement on foreign exchange.

There is no clear consensus among analysts on the trigger point for currency intervention.

Some investors had previously seen 125 yen to the dollar as a trigger for action in the foreign exchange market – the level known as the “Kuroda line” after BOJ Governor Haruhiko Kuroda signalled caution when the yen last reached that mark in 2015.