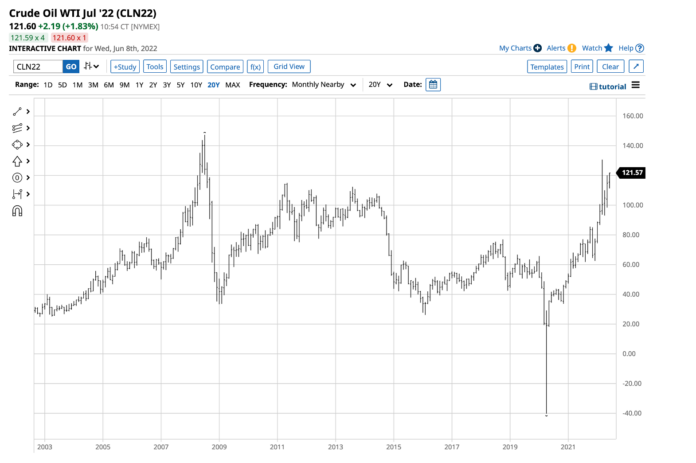 In April 2020, nearby crude oil futures traded below zero, falling to a record low of -$40.32 as the nearby NYMEX futures contract expired. The decline into an abyss came as there was nowhere to store the energy commodity. WTI is landlocked petroleum with a delivery point in Cushing, Oklahoma.

Crude oil became a political tool in 2022 as sanctions on Russia and Russian retaliation have made the oil market a geopolitical hot potato. After years of suffering from low prices because of rising U.S. shale production, the Saudis have gone along with the Russians for the bullish ride. Saudi Arabia requires an $80-per-barrel price to balance its budget. At more than $120 per barrel, the revenues have been nothing short of amazing. Saudi Aramco (TADAWUL:2222) recently replaced Apple (NASDAQ:AAPL) as the publicly traded company with the top market cap. Aramco trades on the Saudi stock market.

While crude oil is sitting at its highest price since 2008, oil product prices are screaming new highs are coming.

In early March, nearby WTI crude oil futures probed over the $130-per-barrel level, while Brent futures nearly reached $140 per barrel. The chart shows the early March rally that took NYMEX crude oil futures to $130.50 per barrel. After correcting below the $100 level in March, April and May, the price was above $120 on June 8. Brent crude oil futures reached a high of $139.13 in early March. After correcting below the $100 level in March and April, the price of the active month August contract was near the $123 level on June 8.

Crude oil corrected and has been digesting the move to the highest level since 2008. Crude oil has been consolidating at the highest price in 14 years. Heating oil futures are a proxy for other distillates, including jet and diesel fuels. Crack spreads reflect the processing differential for refining a barrel of crude oil into the products directly or indirectly consumed each day. Drivers purchase gasoline at the pump, and shoppers buy products brought to market by trucks running on diesel fuel. Travelers (NYSE:TRV) sit in jets powered by jet fuel, a distillate product. Crack spreads are a real-time indicator of demand for oil products and petroleum, the input in the refining process. The quarterly chart shows the move to a record high for the gasoline crack spread as it moved to $61.95 in June. At more than $55 per barrel on June 8, gasoline refining spreads remained above the previous record high of $45.40 in 2013. The price action in oil products and refining spreads are evidence that the demand for the traditional energy commodity is booming in June 2022.

Since crude oil is the primary input in gasoline and distillates, rising product prices translate to upward pressure on petroleum prices.

The upside target in the NYMEX WTI crude oil market stands at the July 2008 high of $147.27, with Brent’s target just above at $147.50 per barrel. Product and crack spread prices are screaming new highs in the oil market are on the horizon.

In April 2020, NYMEX crude oil fell to a record low, trading in negative territory. Before the end of 2022, the futures market could post a new record high at $200 or more above the April 2020 low. Brent futures reached $16 per barrel, the lowest level of this century when WTI went negative. Prices on WTI have already moved over $160 at the most recent March 2022 peak, and it could add to those gains over the coming weeks and months.

The most direct route for a risk position in the oil market is via the futures and futures options arena. WTI trades on the CME’s NYMEX division and Brent on the Intercontinental Exchange. Two ETF products provide an alternative for those looking to participate in the crude oil arena without venturing into the futures markets. The United States Oil Fund (NYSE:USO) and the United States Brent Oil Fund (NYSE:BNO) tend to move higher and lower with the energy commodity in the short term. I favor these products for short-term positions, but not for long-term investments, as USO and BNO struggle with the backwardated markets, where nearby prices are higher than deferred prices. The roll periods in the oil market distort the ETF values.

The highlights of USO and BNO are as follows:

The USO and BNO ETFs are short-term unleveraged tools that follow WTI and Brent crude oil prices. Oil product and crack spread prices are screaming new highs are on the horizon for the oil market in 2022. The risk of corrections increased with prices, so buying on price weakness could be the optimal approach.