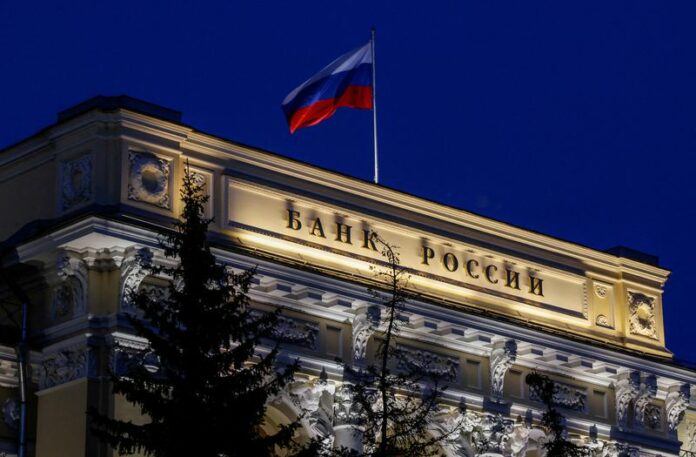 (Reuters) -Russia’s central bank cut its key interest rate to the pre-crisis level of 9.5% on Friday and kept the door open to further easing as inflation slowed while noting uncertainty related to external risks such as the Western embargo on Russian oil.

Russia has been cutting rates since an emergency hike to 20% in the immediate aftermath of Moscow’s despatch of armed forces into Ukraine on Feb. 24 and the unprecedented Western sanctions that followed.

Friday’s rate cut of 150 basis points exceeded the average expectation of a 100 bp move in a Reuters poll earlier this week, after three rounds of 300 bp cuts, the most recent of which was just two weeks ago.

Governor Elvira Nabiullina said the board considered a wide range of rate options on Friday, but the main discussion was whether to cut to 10% or 9.5%.

“Inflation is slowing down, including under the influence of the rouble strengthening and lower inflation expectations. That gave us the opportunity to reduce the key rate again today,” Nabiullina told a media conference.

The rouble extended gains after central bank’s announcement, firming to 56.25 against the dollar, the strongest since May 25 and compared with levels around 57.70 shortly before the rate cut. It hit a record low of 121.53 in March.

The central bank is sticking to a floating rouble policy despite market restrictions imposed in February, but monetary policy could impact the currency in the longer term, Nabiullina said.

She added that the central bank was aiming to avoid the risk of stagflation – the combination of high inflation and economic stagnation.

The latest cut took the rate far below that of annual inflation, which stood at 17% as of June 3, according to the central bank, which hopes to achieve its 4% inflation target in 2024.

Revising its inflation forecasts, the central bank now expects consumer prices to increase by 14-17% in 2022 compared with the previous forecast of 18-23%.

High inflation dents living standards and has been one of local Russians’ key concerns for years, but the economy needs cheaper lending to help overcome the sweeping Western sanctions.

Nabiullina noted a wide range of risks, from still high pro-inflationary pressures to a drop in imports and uncertainty created by the sanctions that have frozen nearly half of Russia’s international reserves that stood at around $640 billion before Feb. 24.

“The effects of sanctions so far appear less severe than we had feared,” Nabiullina said, adding that it was too early to say that Russia has felt the full impact.

“The Bank of Russia will consider the necessity of a key rate reduction at its upcoming meetings,” it said in a statement.

Analysts interpreted the central bank’s rhetoric as a shift towards a less dovish stance that would mean any future rate cuts would be more gradual and cautious.

There could be some symbolism in the fact that the central bank has cut to the “pre-stress level” but the pace of further easing will decline, said Evgeny Zhornist, a portfolio manager at Alfa Capital, predicting the key rate at 8-9% by year-end.