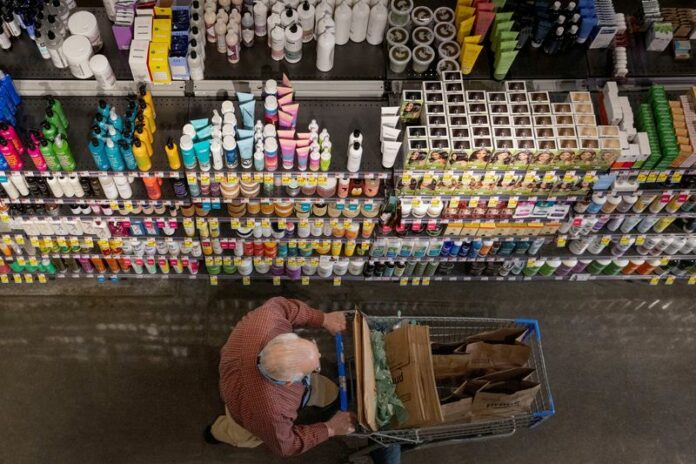 By Devik Jain and Mehnaz Yasmin

(Reuters) – U.S. stock indexes slid on Friday as consumer prices rose more than expected in May, dashing hopes that inflation is peaking and fanning worries about more aggressive steps by the Federal Reserve to tame it.

The Labor Department’s report showed U.S. consumer price index (CPI) accelerated to 1% in May from 0.3% in April, while on an annual basis it surged 8.6% as gasoline prices hit a record high and the cost of services rose further.

Economists polled by Reuters had forecast the monthly CPI picking up 0.7%.

Core CPI prices, which exclude volatile food and energy products, climbed 6% after a 6.2% rise in April on an annual basis.

“What this likely does is change the calculus for what the Fed might do in September versus what they might do next week,” said Art Hogan, chief market strategist at National Securities, New York.

“By that I mean, you have most-assuredly a 50-basis points (bps) rate hike coming next week … but the wagering on September had been a 50-50 between a 25 bps to a 50 bps hike, and now this has definitely shifted to 50 bps.”

The U.S. Federal Reserve’s policy meeting is due on June 14-15. Investors fear a tight labor market coupled with persistently high inflation could force the Fed to quicken the pace of its pandemic-era policy support withdrawal.

Money markets are now pricing in 50 bps rise in rates by the U.S central bank next week, July and September. A Reuters poll also found economists see no pause in rate rises until next year.

U.S. stocks have sold off sharply this year amid heightened uncertainty around the outlook of Fed’s policy moves, a war in Ukraine, prolonged supply-chain snarls and pandemic-related lockdowns in China.

For the week, all the three major indexes are down between 4.2% and 5.2% as rate-sensitive growth stocks came under pressure from elevated Treasury yields.

Microsoft Corp (NASDAQ:MSFT) and Apple Inc (NASDAQ:AAPL) dipped 3.6% and 3.3%, respectively, to weigh the most on all the three indexes.

The CBOE volatility index spiked to 28.41 points, its highest level since May 26.