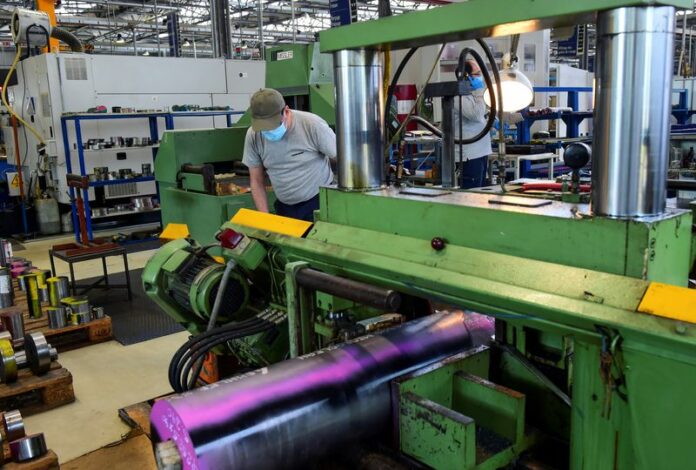 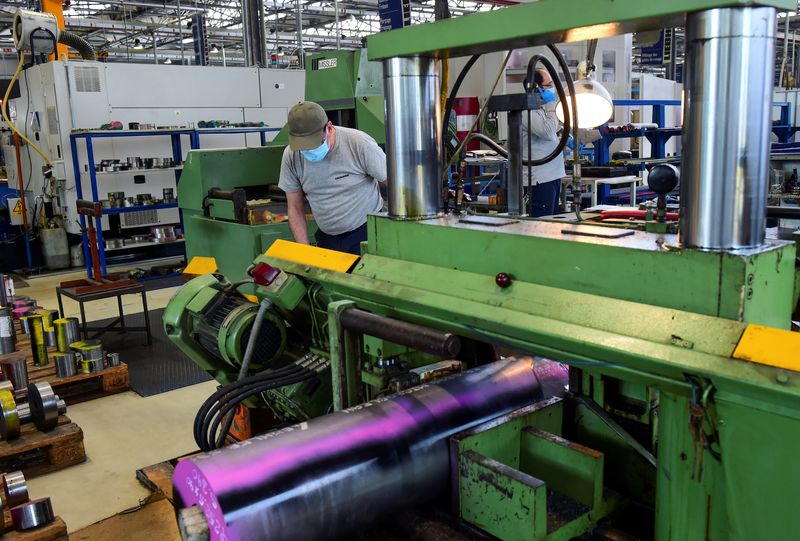 © Reuters. FILE PHOTO: A worker at the Liebherr manufacturing company, which produces gear cutting tools, wears a protective mask as he works in the factory a day after its re-opened, as Italy begins a staged end to a nationwide lockdown due to a spread of the coron

By Valentina Consiglio and Gavin Jones

ROME (Reuters) -Italian industrial output was much stronger than expected in April, rising 1.6% from the month before after a 0.2% gain in March, data showed on Friday, boosting growth prospects for the second quarter.

While the euro zone’s third largest economy still faces many headwinds, it seems to be holding up better than expected a few months ago when some economists were forecasting a recession triggered by surging prices exacerbated by the war in Ukraine.

April’s jump in industry production confounded expectations for a drop of 1.1% in a Reuters survey of analysts, and marked the third consecutive monthly increase.

“Italian manufacturing is proving more resilient than expected in the face of the war and the inflationary shock,” said Intesa Sanpaolo (OTC:ISNPY) economist Paolo Mameli.

“It seems to be hit less hard than the other large euro zone countries by the difficulties in acquiring raw materials and components, probably due to lower reliance on Eastern Europe and Asia for its supply chain,” he added.

On a work-day adjusted year-on-year basis, output was up 4.2% in April, national statistics bureau ISTAT reported, while the February-to-April period saw a rise of 2.0% compared with the three months to January.

Italy’s industrial production is up 4.8% compared with February 2020, the last month before the COVID-19 pandemic hit Europe, Intesa Sanpaolo said. That compares with a rise of 0.8% in Spain and falls of 5.4% in France and of 7.3% in Germany.

Nonetheless, Italy’s larger service sector has been far more fragile and Italian gross domestic product growth continues to lag that of most of its euro zone peers.

First quarter GDP edged up 0.1% from the previous three months, ISTAT reported last month, revising up a preliminary estimate of a 0.2% decline.

While extremely weak, the first quarter reading still came as a relief for Prime Minister Mario Draghi and his government considering that in April the Bank of Italy had forecast a GDP contraction of 0.7%.

On Friday the central bank slashed Italy’s full-year growth forecast for this year to 2.6% from a 3.8% projection made in January. Its latest projection is below the government’s 3.1% forecast made in April.

Bologna-based think tank Prometeia said on Friday that industrial output would probably fall in May and remain volatile in the following months, and Intesa Sanpaolo also forecast some weakening in the near term.