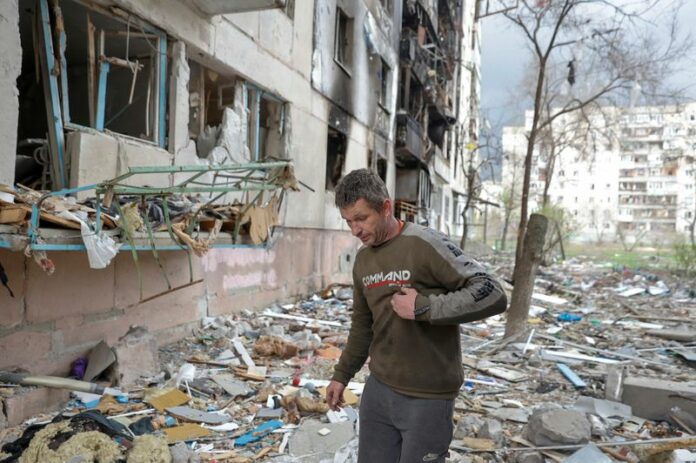 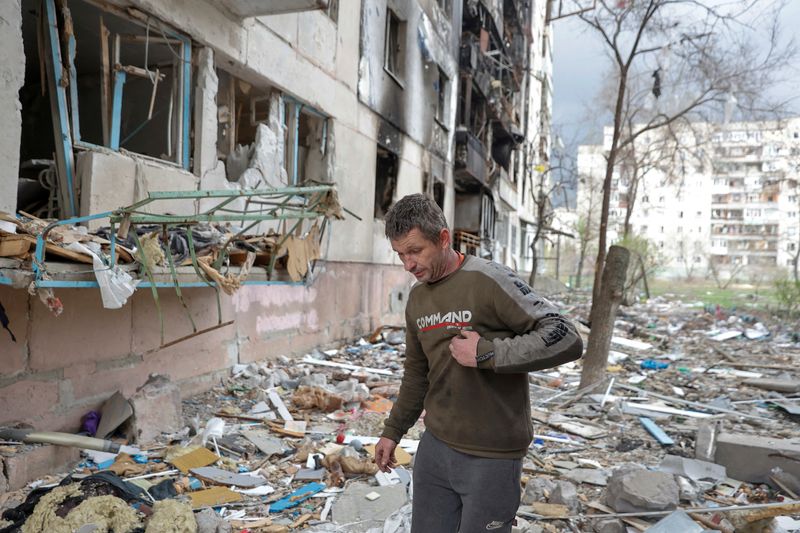 By Natalia Zinets and Max Hunder

KYIV (Reuters) -President Volodymyr Zelenskiy insisted on Saturday that Ukraine would prevail in its almost four-month-long war with Russia that has become focussed on a grinding artillery slugging match over an eastern Ukrainian city.

Russian forces have been trying to seize Sievierodonetsk in their advance in the east, turning it into one of the bloodiest battles so far. Neither side has secured a knock-out blow in weeks of fighting that has pounded the city into rubble.

Ukraine has appealed for swifter deliveries of heavy weapons from the West to turn the tide of the war with Russian forces – which it says have at least 10 times more artillery pieces than Ukrainian forces. Yet even when outgunned, Ukraine’s army has proved more resilient than expected in early phases of fighting.

“We are definitely going to prevail in this war that Russia has started,” Zelenskiy told a conference in Singapore via videolink. “It is on the battlefields in Ukraine that the future rules of this world are being decided.”

After Russia was forced to scale back more sweeping campaign goals when it launched its invasion on Feb. 24, Moscow has turned to expanding control in the east, where pro-Russian separatists had already held a swathe of territory since 2014.

The eastern region known as the Donbas includes the provinces of Luhansk, where Sievierodonetsk lies, and Donetsk.

The family of one of the two British fighters sentenced to death in a brief court appearance last week said on Saturday they were “devastated and saddened at the outcome of the illegal show trial” and called for Shaun Pinner to be treated as a prisoner of war and released or exchanged.

The conflict between the neighbours – two of the world’s biggest grain exporters – has reverberated well beyond Ukraine.

“If due to Russian blockades, we are unable to export our foodstuffs, which is so sorely missing in global markets, the world will face an acute and severe food crisis and famine – famine in many countries of Asia and Africa,” Zelenskiy told the Shangri-La Dialogue conference in Singapore.

The United Nations said on Friday up to 19 million more people in the world could face chronic hunger in the next year because of reduced wheat and other food exports.

Turkey has tried to secure a deal so Ukraine can resume shipments from its Black Sea ports, which accounted for 98% of its cereal and oilseed exports before the war. But Moscow says Kyiv must clear the ports of mines and Ukraine says it needs security guarantees so it is not left exposed.

“As Ukrainian forces use the last of their stocks of Soviet-era weapon systems and munitions, they will require consistent Western support to transition to new supply chains of ammunition and key artillery systems,” the Institute for the Study of War said in a report on Friday.

Effective artillery will be vital in the “largely static fighting” in the east, it said.

Ukraine’s Luhansk Governor Serhiy Gaidai said Russian forces controlled most of Sievierodonetsk, after a grinding to-and-fro in fighting over the city, but Ukraine still controlled the Azot chemical plant where hundreds of civilians are sheltering.

He denied a separatist claim that 300 to 400 Ukrainian fighters were trapped there.

“Our forces are holding an industrial zone of Sievierodonetsk and are destroying the Russian army in the town,” Gaidai said on the Telegram app.

The battle over Sievierodonetsk and its destruction recall weeks of bombardment of the southern port city of Mariupol. It was reduced to ruins before Russian forces took control of the city last month, with the last Ukrainian defenders surrendering from their redoubt in the Azovstal steel plant.

Moscow has denied targeting civilians, but both sides say they have inflicted mass casualties on each other’s forces.

Reuters has not been able to independently verify the battlefield reports in the conflict.

Russia calls its actions a “special military operation” to disarm and “denazify” Ukraine, while Kyiv and its allies call it an unprovoked war of aggression to capture territory.