After Friday’s US Consumer Price Index release printed much hotter than expected, investors are bracing for this coming week’s Federal Reserve interest rate decision. The smartest money is also watching bond markets in search of clues about a possible economic slowdown amid ongoing inflation fears. Treasury yields climbed on Friday, with the 2-year note hitting its highest level in more than a decade even as the 10-year benchmark rose to its highest level since 2018.

As well last week, US equities suffered the worst selloff in three weeks of declines. The downward slump began even before the CPI release as market jitters accelerated with worries that escalating inflation would force US financial policymakers to adopt a continuously aggressive posture on interest rates.

The S&P 500 Index lost 2.9% on the final trading day of the week, for its second steepest selloff of the year and its 9th weekly decline out of 10 amid rising concerns the Fed will not be able to find the right balance for tightening in order to get out ahead of and tame inflation. Markets are concerned the central bank will either continue chasing inflation higher or risk pushing the economy, still suffering from supply chain bottlenecks, into a recession.

Among the 11 SPX sectors, Consumer Discretionary shares underperformed; the sector tumbled 4% just on Friday. On the opposite end of the spectrum, Consumer Staples retreated only 0.4%, just one tenth of the group’s laggard. Persistent, spiking inflation is seen to be the reason consumers are cutting spending on nonessentials, but will continue buying necessary hygiene and food products.

Some analysts think now is the ideal time to bet on Consumer Discretionary stocks, in a contrarian play. They argue that inflation has peaked. We’re not comfortable making that bullish call on fundamentals just yet, and technicals don’t provide any optimism from our perspective.

The price has continuously been slipping below the Falling Channel, demonstrating weakening demand. It’s now also about to drop below the 200-Week MA. Except for at the beginning of the first pandemic wave, the 200 WMA has supported the price since 2010.

Technology stocks were the second-worst performers on Friday, falling 3.8%. In April, the sector completed an H&S top which was confirmed during May–June, suggesting lower prices ahead.

The third worst performing sector was Financials, which dropped 3.6%. This led some analysts to provide a buy call for Goldman Sachs (NYSE:GS) and Wells Fargo (NYSE:WFC) shares. Both stocks have fallen below their respective book values.

GS plunged Friday to its lowest level since January 2021. However, there’s a technical argument to be made there’s now a chance of a bounce. The stock found support at the trend line that connects the 2007 and 2018 highs.

At the same time, though Wells Fargo dropped to its lowest level since April 2021, we can’t make a technical argument suggesting a rebound for WFC shares.

The NASDAQ 100 tumbled 3.6%, underperforming among the major averages. The small cap Russell 2000 fell 2.7%, as did the blue chip Dow Jones Industrial Average.

The NASDAQ 100 also had the worst performance over the final three days of the trading week, shedding 6.9% of value during that period.

Now, investors are trying to figure out if the selloff has run its course or if there’s additional room for stocks to keep losing value. Currently, a consensus has the bank increasing interest rates by another half percentage point. However, inflation, as measured by the consumer price index, climbed 8.6% annually in May, the hottest read since December 1981. Core CPI—which excludes volatile food and energy prices—also jumped, +6%.

Markets are hoping Fed Chair Jerome Powell’s press conference after the central bank’s two-day meeting and interest rate decision will provide some answers. Anxious traders fear the Fed may put the pedal to the metal, raising interest rates more aggressively than initially thought. Therefore, Powell’s language will be carefully parsed, in hopes of unearthing clues to the central bank’s thinking about what they plan for September.

The assumption is, if he adds anything to previously released guidance, it would be hawkish. If he doesn’t, the market may perceive it as dovish.

The yield curve flattened last week, as the 2-year yield gained versus the 10-year yield. The decreasing spread signals increasing chances of a recession.

In a mirror image of stocks, the dollar rose for a third day, to within 0.7% of its May 12 peak, the highest level for the greenback since 2002.

Gold also climbed, despite dollar strength, on its safe-haven status, reaching its highest point since May 6. 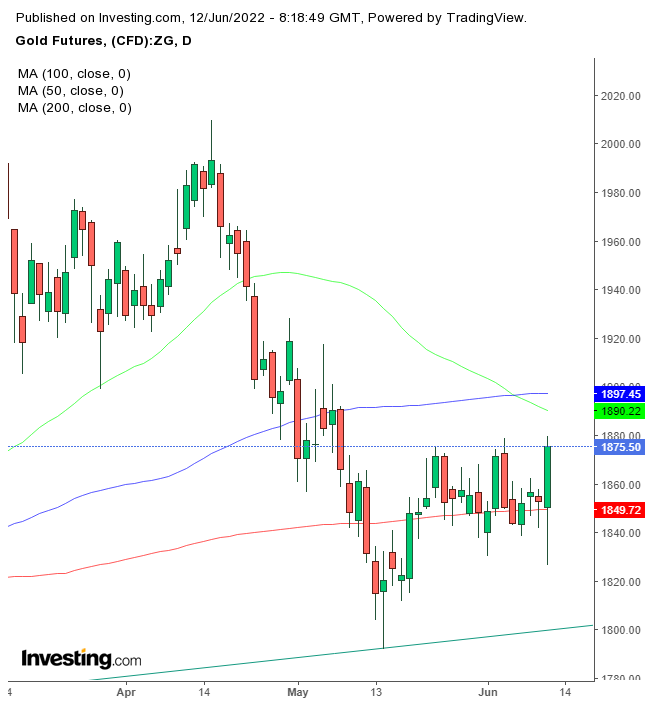 The yellow metal extended its bounce off the uptrend line and off the 200 DMA.

After much talk about Bitcoin reaching a bottom, the leading cryptocurrency dropped for a sixth straight day to its lowest since December 2020. 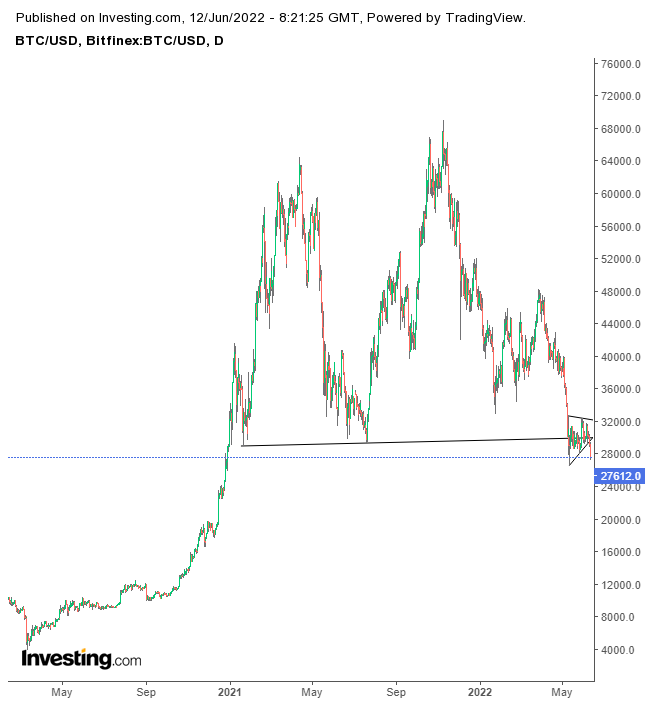 The digital token completed a continuation pattern on the slim neckline of a massive Double Top, which promises a return to prices in the single-digit thousands of dollars.

Oil dropped for a second day to finish the trading week. The price tumbled from the commodity’s highest levels since the Mar. 8 close, which was the highest point for crude since 2008.