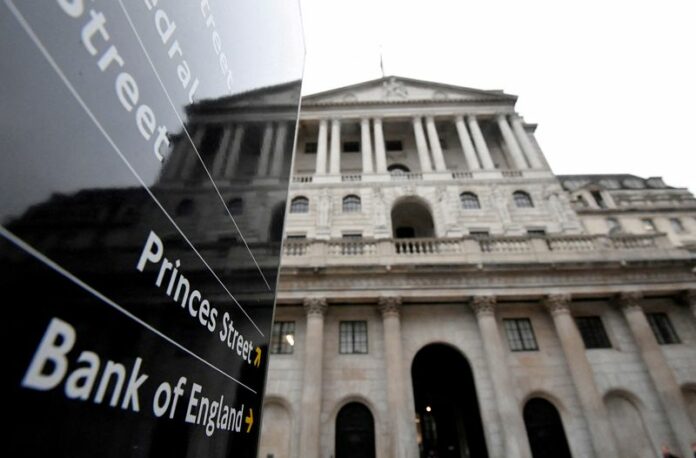 By Andy Bruce and William Schomberg

LONDON (Reuters) -The Bank of England stuck to its gradual increases in interest rates on Thursday, as other central banks took more urgent action, but said it was ready to act “forcefully” if needed to stamp out dangers posed by inflation it now sees topping 11%.

A day after the U.S. Federal Reserve raised rates by the most since 1994 with a 75 basis point hike, the BoE increased Bank Rate by another 25 basis points even as it warned that Britain’s economy would shrink in the April-June quarter.

The Monetary Policy Committee voted 6-3 for the hike to 1.25%, the same breakdown as in May with the minority voting for a 50 basis-point increase.

Britain’s benchmark rate is now at its highest since January 2009, when borrowing costs were slashed as the global financial crisis raged. It was the fifth time the BoE has raised rates since December when it became the first major central bank to tighten monetary policy following the COVID-19 pandemic.

But some critics say it is moving too slowly to stop the rise in inflation from becoming entrenched in pay deals and inflation expectations, damaging the economy over the long term.

“The scale, pace and timing of any further increases in Bank Rate will reflect the Committee’s assessment of the economic outlook and inflationary pressures,” the BoE said.

“The Committee will be particularly alert to indications of more persistent inflationary pressures, and will if necessary act forcefully in response.”

Sterling fell more than a cent against the U.S. dollar before recovering its losses while British government bond yields rocketed.

Investors moved to price in a more than 60% chance of a 50 basis-point rise at the BoE’s next scheduled meeting on Aug. 4, although economists debated whether the BoE’s new language really tilted towards aggressive action in coming months.

JPMorgan (NYSE:JPM) said the BoE’s line on acting forcefully was hawkish and opened the door to bigger rate hikes.

“We are putting in a 50 bp hike for August in anticipation the BoE will not get better news on inflation persistence any time soon,” said JPMorgan economist Allan Monks.

Citi however said the MPC had offered a “steady hand … but no clear steer” on its future intentions.

As in May, MPC members Catherine Mann, Jonathan Haskel and Michael Saunders voted for a bigger, 50 basis-point increase.

Economists polled by Reuters had forecast the 6-3 vote to raise rates to 1.25% but investor bets on a bigger move had risen in recent days, with sterling tumbling and after reports that the Fed was considering its rare 75 basis-point move.

The BoE noted that the market path for British interest rates had risen materially since the May meeting, even though there had been relatively little news since then.

It dropped its guidance from May when it said most MPC members believed “some degree of further tightening in monetary policy may still be appropriate in the coming months”.

Central banks around the world are trying to contain inflation that is hitting levels not seen in decades after the reopening of the global economy after the pandemic and Russia’s invasion of Ukraine.

Last week the European Central Bank said it would lift borrowing costs for the first time since 2011 in July and again in September.

The BoE is raising rates even though it has warned a sharp economic slowdown is coming.

Consumer price inflation hit a 40-year high of 9% in April, more than four times the BoE’s 2% target, and the central bank said on Thursday it would peak slightly above 11% in October, when energy bills go up again.

Britain’s inflation surge looks set to last longer than in many other economies, partly reflecting its mechanism for domestic power tariffs but also because of the hit to trade from leaving the European Union.

A chronic lack of workers to fill vacancies is worrying the BoE because it could lead to a jump in wages that further feeds inflation.

A fall in the pound in recent weeks, caused largely by rising interest rate expectations elsewhere, threatens to add to inflation pressure in Britain.

The BoE said sterling had been “particularly weak against the U.S. dollar”.

It said Britain’s economy would shrink by 0.3% in April-June, rather than growing 0.1% over the three months as it predicted in May.

The forecast for a contraction in the current quarter came despite finance minister Rishi Sunak’s announcement of measures in late May to help households hit by the jump in inflation.

The BoE said those measures could boost growth by 0.3% and push inflation 0.1 percentage points higher in the first year.