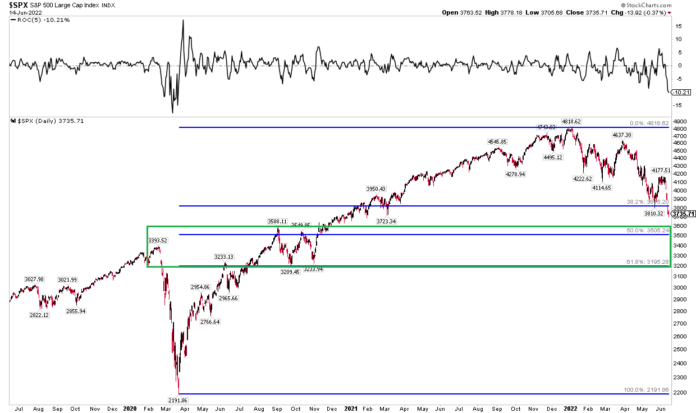 The S&P 500 dropped more than 10% in a matter of days as investors grapple with a new interest rate reality
After penetrating through the May low, which was a 20% drop off the early 2022 all-time high, technicians might be eyeing the February 2020 peak (3,394), right before the COVID Crash
There is also support around the same level from a period of congestion in September and October 2020

Stocks have been in a tailspin over the week or so. The S&P 500 dropped more than 10% from Wednesday last week through Tuesday. Plus, there’s been no place to hide as bonds, cryptocurrency, and even many commodities have endured intense selling pressure.

The market’s quick and severe reaction to the reality of higher interest rates drives price action. The brunt of the downside began last Thursday afternoon. Friday’s U.S. CPI release and the University of Michigan Consumer Sentiment survey sent investors scurrying for the exits. The VIX finally began to perk up, and the U.S. Dollar Index surged to fresh 20-year highs.

It’s a scary environment for the bulls and even long-term investors—they’re all left wondering where the bottom will be. Let’s look at the charts for some clues.

Some thought that the 20% bear market point, at 3,855, would prove to be a decent support level. After all, the stock market has had several instances of pausing right at technical “bear market territory” before reversing course higher.

We saw it both in 2011 and late 2018. Alas, no dice this time around. Stocks initially held that level, but then violated the May lows earlier this week. Where is the next stop on the bear train? And it’s not just that prior high that looks right to my technical analysis eye. Recall the September and October period of 2020 (which feels like ages ago). That was before the Presidential election and in advance of any bullish vaccine news. The SPX chopped in the 3,209 to 3,588 range for those two months before really taking off.

So, there is a significant amount of support there to bring confluence with the high earlier that year. Moreover, the 61.8% Fibonacci retracement point from the March 2020 low to the January 2022 all-time high comes into play at 3,195.

Careful About Clamoring for a Bottom

Calling a bottom is seemingly always a fool’s errand but looking for support and resistance areas using principles of technical analysis can at least give us a general idea of what to expect.

I totally respect those who ignore technicals. I, too, invest for the long run and have been nibbling a bit extra recently as global stocks plunge. The worst thing, however, is to stay in cash and miss the inevitable comeback.

I think we have further downside from here, but we are getting closer to a significant buy area. Another 10% down could be the final washout. I would like to see volatility really kick up—with the VIX spiking to the 45-53 range, which often marks tradeable bottoms in the S&P 500.