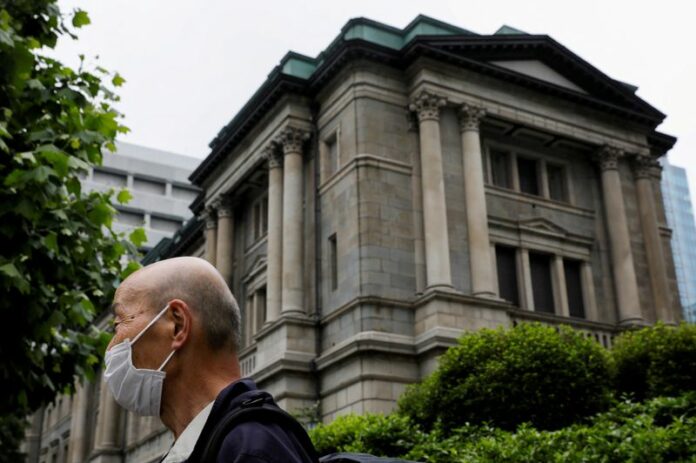 © Reuters. FILE PHOTO: A man wearing a protective mask stands in front of the headquarters of Bank of Japan amid the coronavirus disease (COVID-19) outbreak in Tokyo, Japan, May 22, 2020.REUTERS/Kim Kyung-Hoon/

By Leika Kihara and Daniel Leussink

TOKYO (Reuters) -The Bank of Japan maintained ultra-low interest rates on Friday and its guidance to keep borrowing costs at “present or lower” levels, signaling its resolve to focus on supporting the economy’s tepid recovery from the COVID-19 pandemic.

At the two-day policy meeting that ended on Friday, the BOJ maintained its -0.1% target for short-term rates and its pledge to guide the 10-year yield around 0% by a 8-1 vote.

The decision was widely expected, but leaves the BOJ’s stance even more at odds with other major central banks, which are aggressively tightening policy to curb surging inflation.

“There was speculation the BOJ could tweak policy to address currency moves, but the answer from the central bank was no,” said Shotaro Kugo, an economist at Daiwa Institute of Research.

“The BOJ sent out a message that while steady currency moves are important to hit its price target, it won’t guide policy with a focus on yen moves.”

The bank also left unchanged guidance that short- and long-term rates were expected to remain at “present or low levels.”

The yen tumbled as much as 1.7% and the benchmark 10-year Japanese government bond (JGB) yield fell after the BOJ’s policy decision to remain a dovish outlier.

Central banks across Europe raised interest rates on Thursday, some by amounts that shocked markets, in the wake of the U.S. Federal Reserve’s 75-basis-point hike. A surprise move by the Swiss National Bank left the BOJ the world’s last dovish major central bank.

The growing monetary policy divergence between Japan and the rest of the world has pushed the yen to 24-year lows, threatening to cool consumption by boosting already rising import costs.

The government and the BOJ have escalated their warnings against sharp yen falls, including by issuing a joint statement last week signalling readiness to step into the currency market if necessary.

“We must carefully watch the impact financial and currency market moves could have on Japan’s economy and prices,” the BOJ said in a statement announcing Friday’s policy decision.

Such concerns over the weak yen, however, have not deterred the BOJ from defending an implicit 0.25% cap for its 10-year bond yield target through ramped-up bond purchases.

The BOJ’s yield cap has faced attack by investors betting the central bank could give in to global market forces, as rising U.S. yields push up long-term rates across the globe.

The 10-year Japanese government bond (JGB) yield hit a six-year high of 0.268% in early trade on Friday, exceeding the BOJ’s 0.25% cap, before retreating to 0.22% after the central bank’s policy decision.

Shortly after the policy announcement, the BOJ made an additional offer to buy unlimited amounts of 10-year JGBs, including those with seven years left until maturity.

The BOJ is caught in a dilemma. With Japan’s inflation well below that of Western economies, its focus is to support the stil-weak economy with low rates. But the dovish policy has triggered sharp yen falls, hurting an economy heavily reliant on fuel and raw material imports.