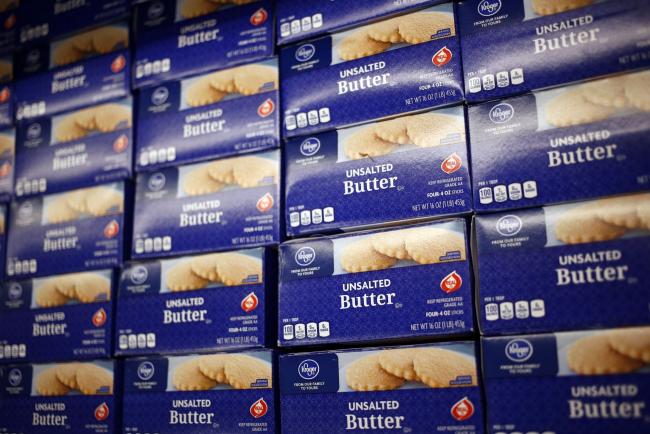 © Bloomberg. Packages of Kroger Co. brand butter are displayed for sale at a supermarket in Louisville, Kentucky, U.S., on Tuesday, March 5, 2019. Kroger Co. is scheduled to release earnings figures on March 7.

Same-store sales for Kroger-branded products rose 6.3% in the first quarter, faster than the overall sales growth, the company said Thursday on its earnings call. Customers who are facing higher prices everywhere from the gas pump to the checkout line “are actively looking for ways to save,” Chief Executive Officer Rodney McMullen told analysts on the call.

Kroger’s comments contrast with the tone lately from consumer-staples giants like Procter & Gamble (NYSE:PG) Co., who say they haven’t seen shoppers trade down to store brands in a meaningful way.

Kroger said it’s also seen a decline in the number of items that customers purchase on a typical shopping trip, though that’s partly due to some shoppers buying in bulk. Customers are also coming in more frequently than before, the company said.

Grocery prices climbed 11.9% from May of last year, the most since 1979, Labor Department data show.