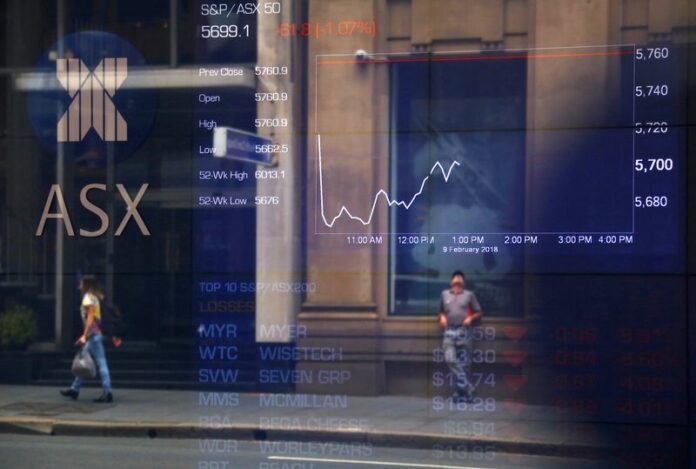 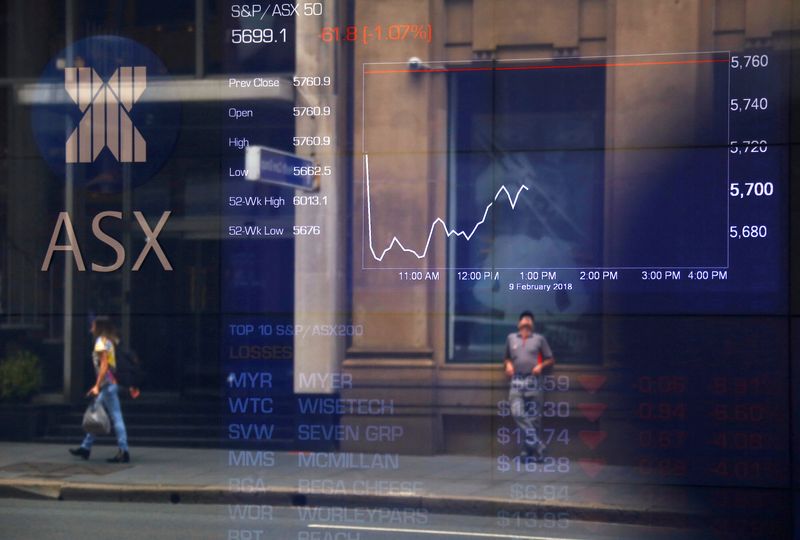 © Reuters. FILE PHOTO: Pedestrians are reflected in a window in front of a board displaying stock prices at the Australian Securities Exchange (ASX) in Sydney, Australia, February 9, 2018. REUTERS/David Gray/File Photo

SINGAPORE (Reuters) – World stocks on Friday headed for their worst week since markets’ pandemic meltdown in March 2020, as investors worried about growth in the face of global rate hikes – except in Japan where policy settings were kept easy and the yen fell.

The Bank of Japan stuck with its strategy of pinning 10-year yields near zero at its policy meeting, in stark contrast to the rest of the world. Even the Swiss National Bank shocked investors overnight with its first rate hike in 15 years.

The yen was last down 1% to 133.75 per dollar in volatile trade after the BOJ decision. It was little salve for broader markets, which are mired in worry that inflation and rate hikes are going to smother economic growth for years.

MSCI’s broadest index of Asia-Pacific shares outside Japan fell to a five-week low, dragged by selling in Australia where the ASX 200 dropped 2%. Japan’s Nikkei fell 2.4%.

“We are entering a tough phase of the regime shift, as the risks over economic growth add to the already hot inflationary backdrop,” said Vincent Mortier, chief investment officer at Europe’s biggest fund manager, Amundi.

“The current repricing is taking most of the overvaluation out of the market, but current levels are vulnerable to any deterioration in corporate fundamentals.”

World stocks are down 5.7% for the week so far, on course for the steepest weekly percentage drop in more than two years.

Bonds and currencies had a wild Thursday.

As well as the Swiss hike, the Bank of England announced a 25 basis point rate rise, which was smaller than expected but prompted gilts to sell and sterling to rise on bets that future hikes would come thick and fast.

“If a central bank does not move aggressively, yields and risk price in more in the way of rate hikes down the road,” said NatWest Markets’ strategist John Briggs.

“Markets may just be continuously adjusting to an outlook for higher global policy rates … as global central bank policy momentum is all one way.”

Sterling rose 1.4% on Thursday and held gains into Friday as it heads for a steady week. Two-year gilts rose 18 basis points to 2.143%.

German debt was likewise dumped after the Swiss surprise and a European Central Bank plan to direct its bond buying toward periphery nations, before growth fears pared things a bit.

U.S. labour and housing data came in soft on Thursday, on the heels of disappointing retail sales figures, with the worries knocking the dollar and helping Treasuries.

Another factor dragging on the dollar was the Swiss franc’s surge, since it is used as a funding currency and often changed for dollars before those are swapped for high yielders – meaning dollars get sold when that trade reverses.

Growth fears took oil on a brief trip lower overnight before prices steadied. Brent crude futures were last at $118.87 a barrel. Gold held at $1,844 an ounce and bitcoin was kept under pressure at $20,600.