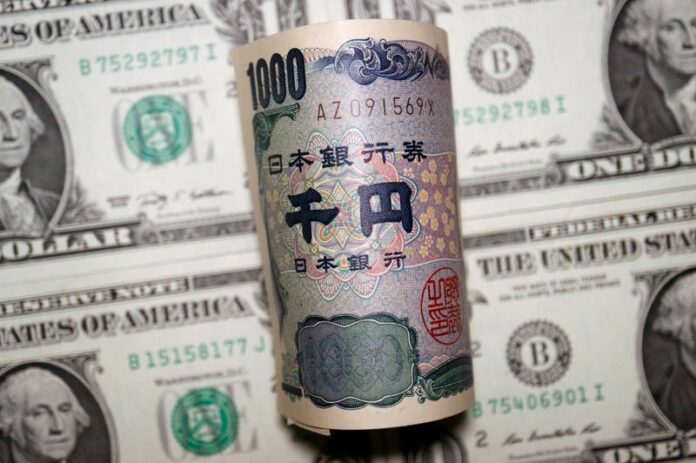 LONDON/TOKYO (Reuters) – The Japanese yen fell 2% on Friday after the Bank of Japan bucked a wave of tightening and stuck with its ultra-accommodative stance, adding to soaring volatility in currency markets hit by a series of rate hikes this week.

The Swiss National Bank’s surprise decision to raise rates by 0.5% continued to reverberate through markets, with the euro losing half a percent and the franc heading back towards two-month highs hit immediately after Thursday’s announcement.

Currency markets, facing the biggest run of monetary policy tightening for decades, are also having to contend with a massive drop in risk sentiment that has sent equity markets tumbling.

The Australian dollar, very sensitive to the broad global investment mood, dropped 0.7% to just under $0.70 as stock markets in Asia tumbled following big falls on Wall Street on Thursday.

The U.S. dollar rose off a one-week low against major peers, following a two-day slide after the Federal Reserve’s mid-week rate increase that did not exceed expectations despite being the biggest since 1995.

Against the yen, the greenback climbed more than 2% to 134.92 yen following volatility in the immediate aftermath of the BOJ’s decision.

The BOJ on Friday vowed to defend its bond yield cap of 0.25% with unlimited buying.

The euro was down 0.4% to the Swiss franc at 1.0152 francs per euro. The franc rocketed to a two-month high on Thursday after the rate hike and boosted by a sense among investors that the SNB would not try and stop a strengthening franc as it has in the past.

Giving up earlier gains, the dollar lost 0.1% to 0.9656 francs, after tumbling the most in seven years overnight.

The dollar index, which measures the currency against a basket of six rivals, rose 0.5% to 104.38.

“The surprise rate hike in Switzerland, as well as the European Central Bank’s announcement that it is working on a tool to prevent the fragmentation of the European bond markets, will help to limit USD strength around current levels,” strategists at UBS’s Global Wealth Management’s Chief Investment Office said in a research note.

Sterling slipped 0.5% to $1.2292, giving back some of its 1.43% jump overnight, when the Bank of England decided to lift rates again — albeit by less than many in the market had expected — along with a hawkish signal about future policy action.