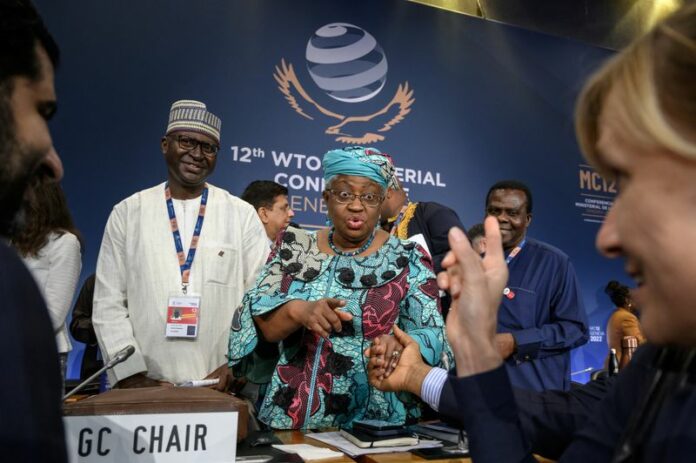 No monologues allowed and dancing to ‘I Will Survive’: how the WTO’s ‘Geneva Package’ was won 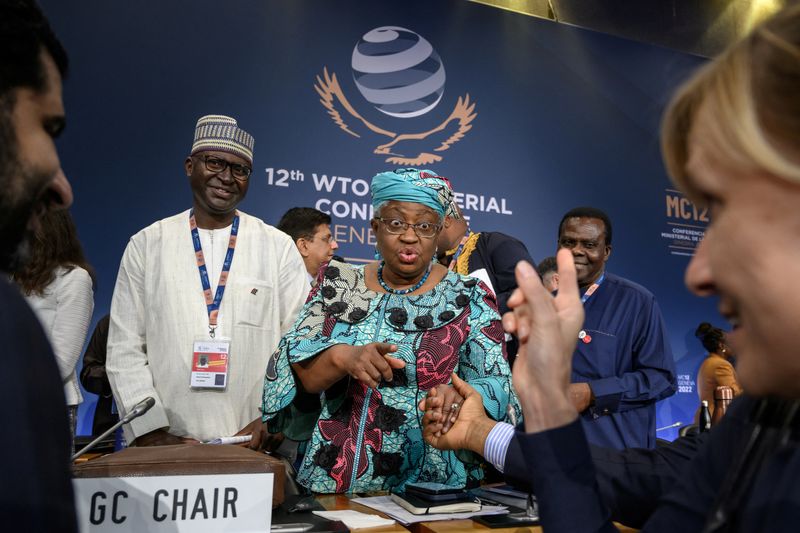 GENEVA (Reuters) – Since Ngozi Okonjo-Iweala took over as head of the World Trade Organization last year, one of her main bugbears has been the negotiating style of member countries, which she says is ineffective, inflexible and needs to change.

The WTO, a global organisation that regulates international trade, is often accused of being outdated and unproductive, criticisms Okonjo-Iweala has sought to address directly since taking the helm as its director-general.

“You have to talk to each other. And that means there has to be compromise; no one side will get 100 % of what they want,” Okonjo-Iweala chided at the start of the WTO’s biennial ministerial conference this week.

The conference overran by two days but delivered the biggest package of multilateral trade deals since the Uruguay Round of Talks that launched the WTO 27 years ago. It also created new global trading rules, related to fish subsidies, for only the second time in the organisation’s history.

This time, to avoid time-wasting, ministers were asked to put their opening statements on a public website, instead of forcing the trade watchdog’s 164 members to listen to each one.

Okonjo-Iweala is a talented negotiator herself whose biggest coup as Nigerian finance minister was to persuade the Paris Club to waive her country’s historic debt.

Not everyone was satisfied with final agreement, with many civil society groups saying that one of the main deals struck, a partial waiver on intellectual property for COVID-19 shots, was watered down significantly during the course of negotiations.

But some diplomats credited Okonjo-Iweala for there being deals at all. At several points, negotiations looked hopeless or were on the verge of collapse due to intransigence by India and protests over a fishing text that did not go as far as many coastal and island nations wanted.

“She (the DG) deserves a lot of praise and she pushed us when we needed to be pushed, U.S. Ambassador to the WTO, Maria Pagán, told journalists.

EU trade chief Valdis Dombrovskis agreed that her determination had been instrumental in a deal being reached.

“That’s her style, she was very engaged, very hands-on, one could even say pushing WTO members, pushing for outcomes. Certainly, she played a very significant role here,” Dombrovskis told reporters.

Tensions created by the Ukraine war also changed the dynamic, breaking up big sessions into smaller, more dynamic meetings, with chairs shuttling between them, since some Western members refused to talk to Russia.

“What was different this time is that there were more and a greater variety of smaller meetings and there was more movement and fluidity,” said Peter Ungphakorn, a former WTO staff member who now writes blogs https://tradebetablog.wordpress.com/author/tradebetablog on trade.

By the end of the week, ministers and delegates formed scrums around the director general and her wooden gavel in the early hours of the morning.

Her supporters say she has reenergised the office of the Director-General – a role that does not have many formal powers – although some members have criticised her for processes they say are opaque and exclusive.

Much of the legwork this week was done by delegates. Images shared with Reuters show a dozen negotiators clustering in huddles to draft language around a single laptop and tables strewn with mints and empty coffee cups late past midnight on Thursday.

The coffee was at times badly needed, with hours spent on a single footnote of an agreement on a COVID-19 IP waiver.

For diplomats the week has also been a marathon. U.S. Ambassador Pagan said she and some colleagues kept themselves going by dancing to “The Final Countdown” and “I Will Survive”.

“We also at 2 or 3 in the morning danced a little bit in one of the rooms while we were waiting for something to happen, just to keep ourselves awake and entertained,” she said.

By dawn on Friday, Okonjo-Iweala’s voice had grown hoarse from hours and hours of talks and two sleepless nights. “Today, I think I can say you really are earning your salary,” she joked to Geneva trade ambassadors.

(Refiles to fix typo in ‘WTO’ in paragraph three.)