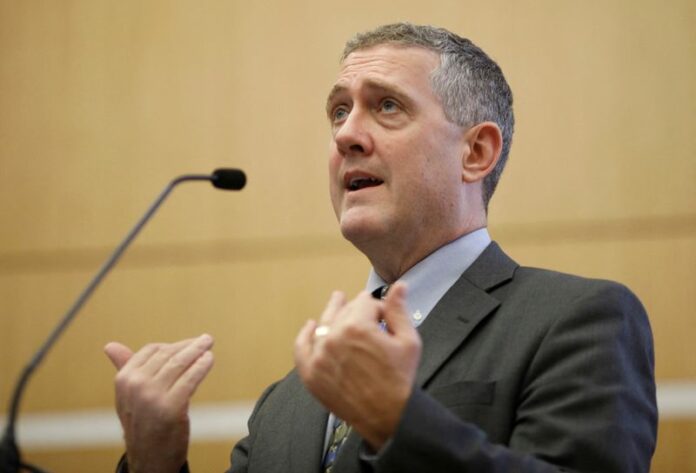 (Reuters) -The U.S. Federal Reserve could raise interest rates swiftly this year and forge a “stellar” economy ahead if it can pull off a repeat of the success of the central bank’s 1994 tightening cycle, St. Louis Fed President James Bullard said on Monday.

“That tightening episode caused some disruption that year,” Bullard said during an event held by the AXA-Barcelona School of Economics in Barcelona, Spain. “However, I have always felt that set up the U.S. economy for a stellar performance in the second half of the 1990s … I hope we can get something like that this time.”

Bullard has been a vocal backer of aggressive Fed action to tame stubbornly high inflation that is running at more than three times the U.S. central bank’s 2% goal. The 1994 tightening cycle saw the Fed double interest rates to 6% in seven rapid-fire hikes that included one 75 basis point and two 50 basis point moves. The Fed’s so-called soft landing, in which a recession was averted, was followed by a period of rapid growth and a historically tight labor market.

Last week on the heels of another worse-than-expected inflation report, the Fed raised interest rates by three-quarters of a percentage point to a range of 1.50%-1.75%, but now forecasts borrowing costs more than doubling from that level over the next six months.

Fed Chair Jerome Powell said last week that he anticipates either a 50 or 75 basis point move in July, and since then several policymakers, including those previously more cautious in their approach to reducing price pressures in case the central bank sent the economy into recession, have appeared to back a whatever-it-takes approach.

On Saturday, Fed Governor Christopher Waller called for the Fed to implement another 75 basis point increase at its next meeting in July, saying the central bank is now “all in” on restoring price stability.

Bullard noted the Fed still has some way to go in reducing inflation. “We are moving quickly, but moving from a low level and from the very accommodative monetary policy we put in place,” he said.