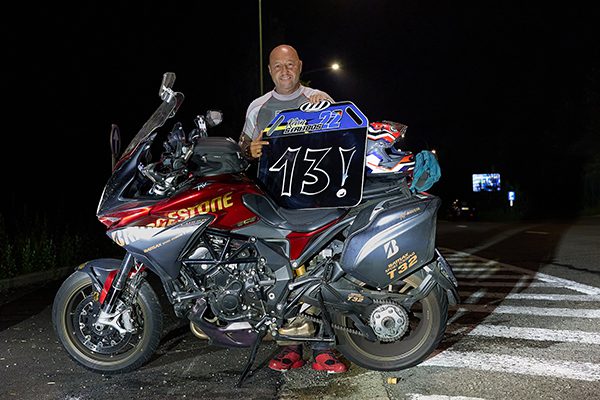 Belgian rider and bike enthusiast Thierry Sarasyn has broken on June 20th the world touring record, passing through an incredible 13 countries in just 19 hours and 43 minutes.

He was helped on the way to beating the previous record of 11 countries by Bridgestone’s Battlax Sport Touring T32 tyres.

Sarasyn started at 4.16am in the Czech Republic and arrived in Arlon, Belgium, at 11.59pm. “I still had four hours to get to Holland, which is not too hard from any point in Belgium,” he said.

“But the goal was not to set a record that can never be beaten, just to beat the existing record. I knew I had it once I got to Luxemburg, but after that it was only 10km to get to Belgium. It seemed logical to add the 13th country to the list.”

The decision not to attempt a 14th country was also due to safety. “I felt I was getting tired. And being tired while riding in the dark is not safe. We put safety first during this travel. I was not riding too fast, took breaks at least every two hours and followed strict nutritional rules to keep my focus.”

The record was recorded using an official tracking system and Sarasyn could be followed throughout every moment of the attempt.

On his choice of using the Bridgestone Battlax Sport Touring T32 tyre to set this impressive world record, Sarasyn is clear: “I knew there would be highways but also mountain roads. So I needed a versatile tyre. And I always loved the way the T32 front tyre handles and the feedback it gives. I had many challenges during the almost 1800km of this trip, but the tyres weren’t one of them.”

These challenges included physical and mental fatigue, backpain, traffic problems, navigation failure and the excessive heat on the day. From 11am, the temperature remained above 35ºC, peaking at 39ºC in Austria and Liechtenstein. Even when Sarasyn finished in Arlon, the temperature was 35ºC.

“Hydrating is key in keeping the focus. I drank a lot and I think it was one of the major elements in making this adventure successful,” he said. “That – and a set of great tyres!”

Battlax’s next-generation sport touring tyres, the T32 and T32GT, are the result of technical expertise and technological applications that are at the forefront of tyre development. By significantly enhancing the tyre’s connection with the road from the T31, Bridgestone created a tyre that delivers incredible performance even in poor conditions. The objective is to give riders more control and confidence in the wet and this tyre delivers exactly that.

Nico Thuy, Bridgestone EMIA Head of Motorcycle, said: “On behalf of all of us at Bridgestone, I’d like to say a huge congratulations to Thierry for his incredible achievement. Thierry’s confidence, performance level and versatility exemplifies all that is great about the T32.

“’Emotion’ is a key part of The Bridgestone E8 Commitment and Thierry’s efforts will certainly help to inspire excitement and spread joy to the world of mobility.”