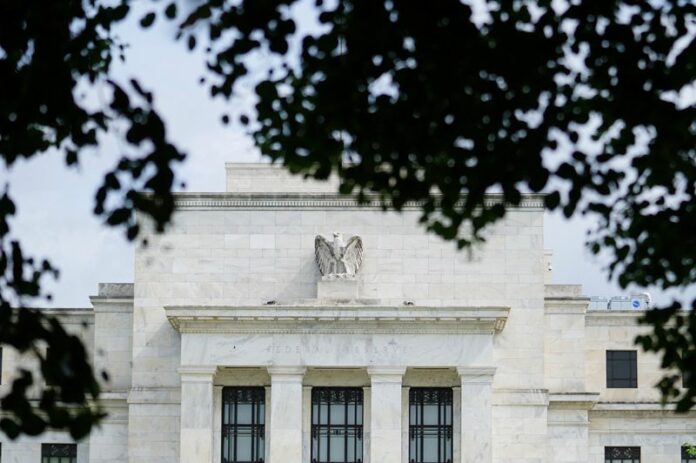 By Pete Schroeder and Michelle Price

WASHINGTON (Reuters) -The largest U.S. banks would remain well capitalized in the event of a severe economic shock, the U.S. Federal Reserve said on Thursday after the lenders’ annual health check, paving the way for them to issue share buybacks and dividends.

The 34 lenders with more than $100 billion in assets that the the Fed oversees would suffer a combined $612 billion in losses under a hypothetical severe downturn, the central bank said. But that would still leave them with roughly twice the amount of capital required under its rules.

As a result, banks including JPMorgan Chase (NYSE:JPM), Bank of America (NYSE:BAC), Wells Fargo (NYSE:WFC), Citigroup (NYSE:C), Morgan Stanley (NYSE:MS) and Goldman Sachs (NYSE:GS) can use their excess capital to issue dividends and buybacks to shareholders.

Under its annual “stress test” exercise established following the 2007-2009 financial crisis, the Fed assesses how banks’ balance sheets would fare against a hypothetical severe economic downturn. The results dictate how much capital banks need to be healthy and how much they can return to shareholders.

Banks must wait until after markets close at 4:30 p.m. EDT (2030 GMT) on Monday to announce their capital distribution plans.

While the 2022 scenarios were devised before Russia’s invasion of Ukraine and the current hyper-inflationary outlook, they should give investors and policymakers comfort that the country’s banks are well-prepared for what economists warn is a potential U.S. recession later this year or next.

The 34 banks suffered heavy losses in this year’s scenario, which saw the economy contract 3.5%, driven in part by a slump in commerical real estate asset values, and the jobless rate jumping to 10%. See an EXPLAINER on the stress tests here:

But even then, the Fed said aggregate bank capital ratios were still roughly twice the minimum amount required by regulators.

In 2020 the Fed changed how the test works, scrapping its “pass-fail” model and introducing a more nuanced, bank-specific capital regime.

The test assesses whether banks would stay above the required minimum 4.5% capital ratio, which provides a cushion against potential losses. Banks that perform well typically stay well above that.

The average capital ratio for the 34 banks was 9.7%, the Fed said. That compares with 10.6% last year, when the Fed tested 23 lenders against a slightly easier scenario.

“The stress tests show that the nation’s largest banks are strong and serve as a source of stability for an economy facing some pronounced headwinds in the coming months,” said Isaac Boltansky, director of policy research for brokerage BTIG.

Huntington Bancshares Incorporated (NASDAQ:HBAN) had the lowest ratio at 6.8%, while Deutsche Bank (ETR:DBKGn)’s U.S. operations had the highest ratio at 22.8%.

The test also sets each bank’s “stress capital buffer,” an extra capital cushion on top of the regulatory minimum, the size of which is determined by each bank’s hypothetical losses under the test. The Fed will announce those buffers in coming months.

They also estimated the amount of capital lenders redistribute to shareholders in 2022 will decline roughly 10% from a year earlier.