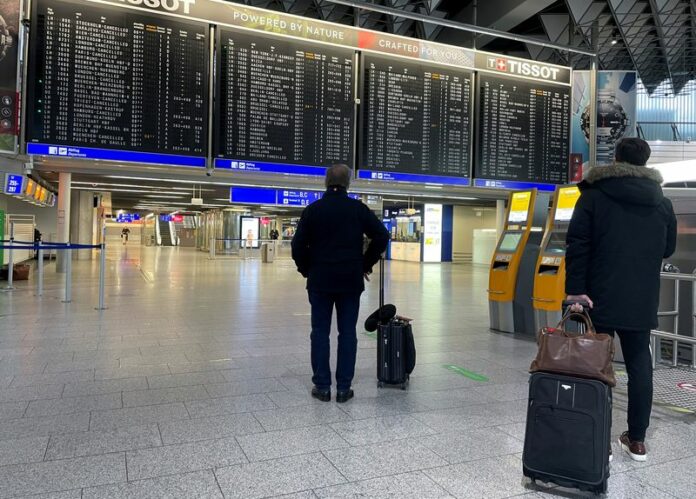 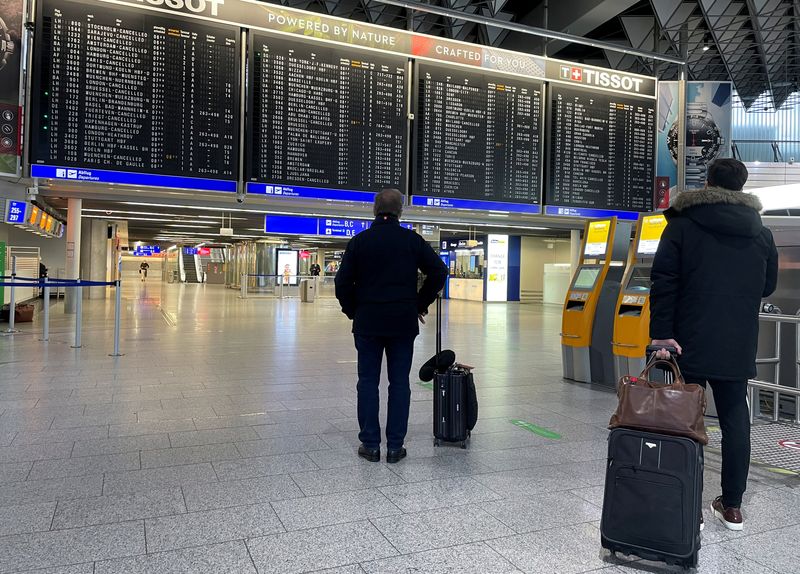 © Reuters. FILE PHOTO: Passengers stand in front of a timetable showing many cancelled flights at Frankfurt Airport during a strike of security staff at various German airports to put pressure on management in wage talks in Frankfurt, Germany, March 15, 2022. REUTER

BERLIN (Reuters) -Germany wants to bring in foreign workers as quickly as possible to relieve airports overwhelmed by staff shortages during the busy summer season, an Interior Ministry spokesperson said.

The temporary workers, who would be offered accommodation and a standard wage, would have to fulfil the same security and reliability checks as other staff such as baggage handlers, which in general take about two weeks, the spokesperson said at a regular government news conference in Berlin on Monday.

Travellers across Europe are facing especially long queues this summer as travel demand is back in full force after COVID-19 lockdowns, and airports and airlines are having trouble maintaining enough staff to handle the crunch.

According to the ADV airport association, about one in five jobs in security, check-in and aircraft handling is unfilled.

Airports are expected to announce their exact needs in the coming days, but the head of the ABL association of aircraft ground handling employees expects 1,000 to 2,000 workers will be allowed in for three months, most likely starting in August.

“A time limit of a maximum of six months until the end of the year would have been nice,” said Thomas Richter in an interview with Reuters. “It doesn’t solve the problem, but it certainly helps.”

At odds with the desire to quickly bring in help is the need to ensure airport security, with Interior Minister Nancy Faeser emphasizing that there would be no cutbacks in that regard.

Andreas Rosskopf, the chairman of Germany’s police union, said newly recruited foreign workers could be used for jobs such as baggage handling, but warned against trying to put them into positions requiring additional security.

“We are talking about people who have to be intensively screened and briefed in terms of security. That takes a certain amount of time,” Rosskopf told the Rheinische Post newspaper.